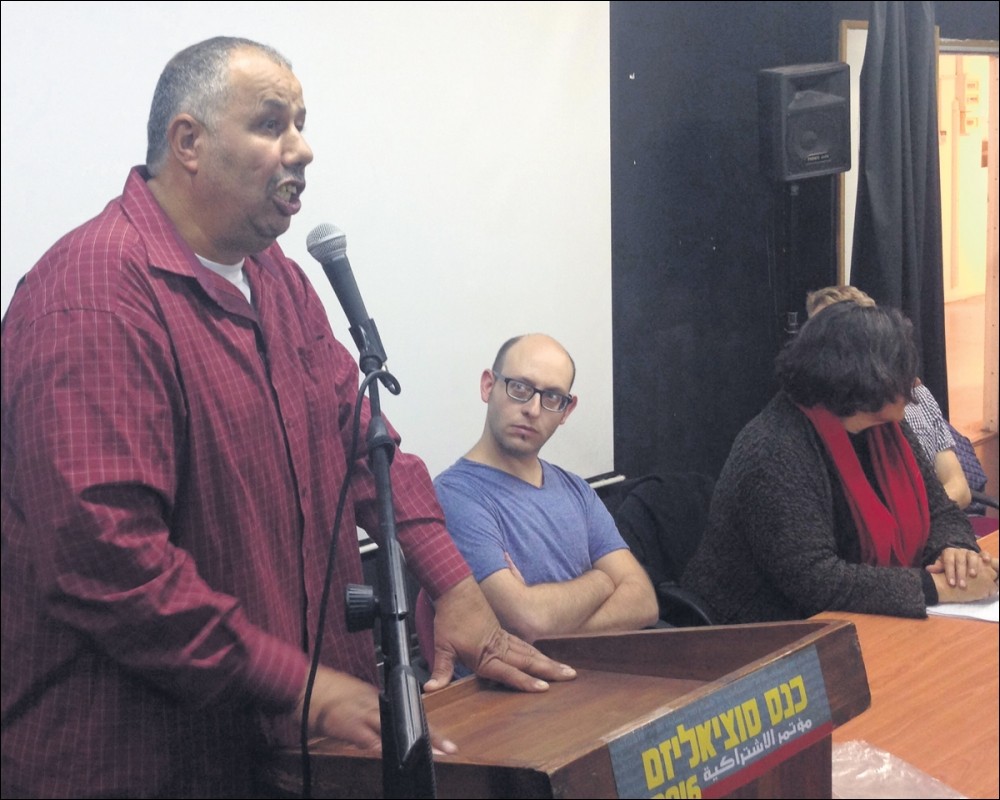 A week earlier, Socialist Struggle Movement – the Israel/Palestine section of the Committee for a Workers’ International (CWI) – hosted its annual Socialism conference in Tel Aviv where the major themes of debate were: the fight against Netanyahu’s right-wing government, racism and the occupation. There were also discussions on the extreme right, trade unions, the environment, women and LGBT rights, and more. In the following report Per-Åke Westerlund of Rattvisepartiet Socialisterna (CWI Sweden) – an international guest speaker – gives a flavor of this highly successful event.

With close to 150 participants and a record number of Palestinian speakers, the conference was a great success.

Four days before the Socialism conference was held, Mohammed Abu Hummus, member of the al-Issawiya popular committee in occupied East Jerusalem, was shot in the leg with a rubber-covered bullet. Yet he arrived, with a cane as support, to talk about the fight against the settlements and the occupation of East Jerusalem.

“I’m always filming the conduct of the army, border police and police. I have over 500 films on violence, abuse, and more. This time they had blocked off a street. I filmed and they lied about why they blocked the road. Then I was shot”, said Mohammed.

In summer 2014 he was shot in the leg with live ammunition during a protest against the war and slaughter in Gaza. He was hospitalized, but did not report it as the police would not have investigated.

In January, his cousin’s 12-year-old son was shot in the head with a rubber bullet. The soldiers claimed that he had thrown a stone at them. The 12-year-old ended up in a coma, but survived.

Mohammed explained how Israeli state violence and repression has increased with more and more settlements in East Jerusalem.

Most recently, land was seized for a highway to the Jewish settlement of Maale ‘Edomin and a new landfill. Another large area of 440 square kilometers is said to become a national park.”

Maale ‘Edomin is one of the three largest settlements that together have 150,000 inhabitants. New and expanded settlements are now to be legalized as part of the right-wing government policies.

“When a court explained that the Israeli government has no right to take our land, the government responded that they have not taken anything, but only ‘built the park’,” said Mohammed.

“Police and soldiers act in East Jerusalem to create the wars and conflicts they say they are there to prevent. We can see how 30-40 soldiers chase a child along a street. The aim is to intimidate. There are children who do not dare go to school.

“The brutality is clearly shown on a film in which an Israeli soldier kills a Palestinian, and then plants a knife on the victim.”

When the border police seize a Palestinian for ‘administrative arrest’ they do not have to show any charges or documents to imprison anyone for a period of six months – the arrest can be prolonged for further periods of six months indefinitely.

A few years ago a hunger strike among the prisoners meant that several were released and the numbers arrested fell. But since January 2014, the number held without charge has increased from 155 to 720, including three members of the Palestinian Legislative Council.

400 children under 18 years are kept in detention. The total number of political prisoners, as estimated by the organisation Adamir, is 7,000.

More and more Palestinian houses are being demolished. Both in East Jerusalem and in “Area C” (areas not directly under the Palestinian Authority since the Oslo agreement in 1993) more houses and buildings were destroyed in the first half of 2016 than during all of 2015. The demolitions are the worst in 20 years, according to the NGO Ir Amim.

“The government destroys houses where families have lived for 55 years, claiming they are ‘illegal’,” says Mohammed.

The description of East Jerusalem was confirmed by Ron Zaidel from the organisation Breaking the Silence, which consists of former Israeli soldiers against war and occupation.

“The state’s behavior in the occupied areas has spread to East Jerusalem and into Israel itself. It is about control. They show their presence to underline who has the power. Houses and homes are searched, but they never say why.”

“When they have made a raid, they finish by throwing hand grenades. The Palestinians are treated as enemies who should live in constant fear.”

The panel also included Amira Hass, well-known journalist on the newspaper Haaretz, who lives in Ramallah in the West Bank. She emphasized that it is about both the occupation and a colonial regime.

The Israeli state exercises control over two different systems: in Israel itself and in the Palestinian Authority areas, which in practice is an Israeli ‘protectorate’. Also, in Israel democratic rights are increasingly restricted.

“The colonization has deepened. Israel’s rulers are trying to eliminate the Palestinians’ collective existence. Gaza is a prototype, an enclave separated from the world. In the West Bank and East Jerusalem they create tiny Gazas. The Palestinian nation is at its lowest point,” said Amira.

“More than 500 Palestinian homes were demolished in 2015. This year it is already double that. The number of arrests and killings is also increasing.”

Yasha continued: “The Oslo agreement came about as a response to the first Intifada, a mass uprising against the occupation. Direct military rule was supposed to be replaced with some autonomy in the fragmented Palestinian areas. However, the occupation continues and deepens.

“At the same time, Netanyahu is on a collision course with history. In the year 2011, with the revolutions in Tunisia and Egypt, and hundreds of thousands in the streets of Israel in over two months against price increases and the housing crisis, support for the government plummeted. The counter-revolution in the region and the lack of alternatives in Israel has led to its recovery.”

Yasha described that since the election of Trump in the U.S., far-right elements of Netanyahu’s government speak openly of the annexation of the West Bank and imposing an apartheid-style regime on Palestinians living in this area.

But the majority of the Israeli capitalist elite fear that any significant move in this direction can provoke a new mass uprising of Palestinians – an uprising that is indeed necessary as Yasha stated.

“Repression is also a sign of the regime’s worry. For example a ‘code of ethics’ that the ministry of education wants to impose on universities in Israel prohibits students and teachers from talking about what is happening in the occupied territories.”

Yasha and other speakers recalled last year’s teachers’ strike in the West Bank, which was directed against both the Palestinian Authority and the occupation. The strike was hardly reported in the Israeli media and did not get the attention of the teachers’ union in Israel.

The nationalist-racist reaction in Israel is not based on any economic interest of the Jewish working class. The on-going expropriation of the Palestinian masses on both sides of the ‘green line’ goes hand-in-hand with neoliberal attacks on workers and poor people in Israel and ‘divide and rule’ policies.

It is security/existential concerns that allow for the ruling class to control workers and others.

Socialists need to support dialogue and common struggle, especially working-class struggle, for Palestinians and Jews in order to emphasize their common interests against Israeli capitalism, and for democratic socialist societies without national oppression.

It means standing up for a socialist Israel and a socialist Palestine. Today, to advance the slogan of a common state would not answer the national aspirations and big concerns for safety of both sides, while a two-state solution on a capitalist basis would mean a Palestine vassal state of Israel.