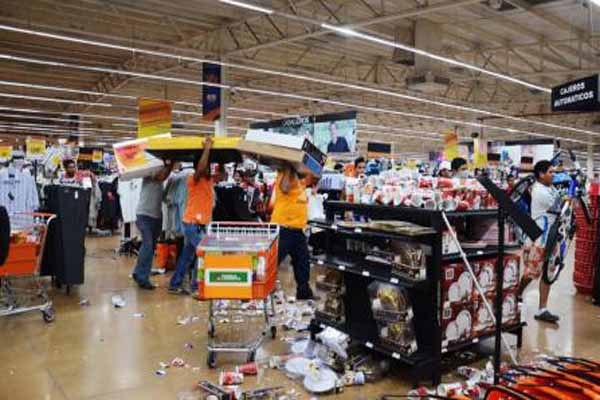 The answer that the Mexican working class has given to the gasolinazo (fuel price hike) has been overwhelming. In four days the entire country has experienced intense mobilizations and acts of protest.  Various cities have witnessed roadblocks, the occupation of gas stations and forced closures of Pemex supply-plants. The government is conscious of all the discontent. Because of this, since the night of January 3, they have infiltrated the ranks of the movement, with agents provocateurs to incite vandalism or pillaging businesses.  Despite the provocations, and to prevent them, the movement must continue to extend itself to more cities, unifying its forces in the general assemblies that have been called for next weekend.

The wave of ransacking continued January 4, extending itself north of Mexico City, and other municipalities such as Ecatepec, Naucalpan, Atizapan, Tecamac, Huehuetoca, Yuktitkan, among many others. Some media reports have confirmed that it has been the PRI-ista government of the Mexican State that has enlisted paid bands to carry out these acts of vandalism and ransack. It is no coincidence that these acts have taken place in peripheral zones of Mexico City, who herself has been the place of multiple protests against the gasolinazo. Most of these protests have blocked or closed gasoline stations on the Mexico-Queretaro and the Mexico-Pachuca highways.

The ransacking has unfortunately swept up fractions of society’s classes who are steeped in great misery, who see this as an opportunity to momentarily “resolve” their situation. Once the provocateurs have generated an environment in which they can involve the marginalized sectors, the police arrive and arrests them. With these arrests, they pretend that they can conceal that they are the real perpetrators of these acts vandalism and ransack, that in no way had been originally part of the struggle against the gasolinazo.

The media have complemented the government’s dirty work, by creating a climate of panic and hysteria, attempting to equate social struggle with nonsensical violence. They claim that working people should not leave their houses fearing being victim to lawlessness. And on the other hand, they open the door to the justification of state-repression, having created the environment that would command army or police intervention. Not only against those that participate in the ransacking, but against the entire movement.

It is fundamental that we denounce the government for its responsibility in the acts of vandalism. For many years, the government has created “shock-units” in universities that commit all kinds of violent acts to delegitimize the authentic nature of student struggle. They use these same tactics within communities.

The protests against the gasolinazo must continue to spread across the country through broad mobilization of the masses. We must continue with the use of brigades of informers who accompany the street barricades and the roadblocks, to win the sympathies of the entire working class over to participate in the struggle. It is important too to identify all the elements that would incite acts of vandalism, as to isolate them from the rest of the movement. While at the same time explaining to the people that these actions are useless, and that the only thing they do is discredit the movement and invite repression. Moreover, the protests must be wary of violence against Pemex gas-station workers. They are part of the working class, and therefore they are not our enemies. We must win them over. Finally, we must work as one national movement founded for the purpose of combating the gasolinazo. This struggle must jostle all the sector of Left into action against the government. This struggle proves the capacity of the people to self-organize. This capacity must be elaborated, by creating stable committees in each neighborhood that resists and continues the struggle, creating a national network that will take charge of society’s basic needs: health, education, employment and housing for all the country’s workers.

ABOUT US
Socialist Alternative is a national organization fighting in our workplaces, communities, and campuses against the exploitation and injustices people face every day. We are community activists fighting against budget cuts in public services; we are activists campaigning for a $15 an hour minimum wage and fighting, democratic unions; we are people of all colors speaking out against racism and attacks on immigrants, students organizing against tuition hikes and war, women and men fighting sexism and homophobia.
Contact us: info@socialistalternative.org
FOLLOW US
© Socialist Alternative 2019 | All rights reserved
74 Shares
Tweet
Share74