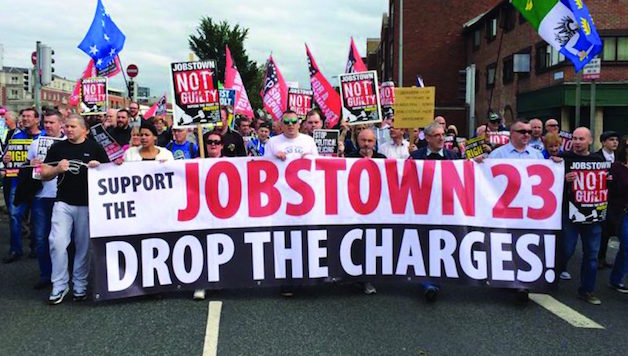 The “Josbstown trials”, linked to a famous protest in a local working class area of Dublin which stopped the car of then Deputy Prime Minister, Joan Burton, for 2 hours, are scheduled to begin today with the trial of a 17 year old on trumped up charges of “false imprisonment”. CWI sections in a number of countries will be organising #JobstownNotGuilty solidarity protests around the world today demanding the dropping of all charges against protestors. More info and reports will follow on socialistworld.net.

Meanwhile, tens of thousands took to the streets of Dublin on Saturday in the latest march against water charges. Paul Murphy – who is among the dozens of activists threatened with imprisonment – addressed the demonstration (see video here) and the #JobstownNotGuilty cause featured heavily throughout the proceedings.

Despite the expectations of many that the #JobstownNotGuilty protesters would not go to trial, the first charged for false imprisonment is due to start his trial on 19 September. Next year, another 18 face charges, which could result in up to life imprisonment.

These are the most serious political trials in decades. They threaten the right of people to protest.

The actions of the state leading up to these trials lay bare how it operates to defend the interests of the 1%. The context is one of a mass movement of civil disobedience against water charges, which has now succeeded in forcing their suspension and the collapse of the traditional political establishment parties.

The ruling class in Ireland is looking at a scary vista of further social movements, the rise of the left and the possibility of more victories for working people which will further embolden them. It therefore acted – with hundreds of arrests, the jailing of anti-water meter protests and Jobstown – to send a message and try to dampen down that protest.

The choreographing of two weeks of dawn raids in February 2015 with 6, 8 or 10 Gardai arresting protesters was a key part of this. The leaks to RTE by the Gardai were also designed to criminalise the protestors in the eyes of people.

This happened simultaneously to the revelations about Operation Mizen, which was a spying operation directed by the Gardai against anti-water charges protesters. The forces of the state were marshalled and used to try to assist the imposition of water charges – a key part of the ruling class’ agenda for shifting the taxation burden and privatisation.

A particular feature of this trial has been the trial by media and politicians already deployed to try to shape public opinion. This goes from Claire Byrne declaring that “you falsely imprisoned the Tanaiste” on the first day of the dawn raids, to Olivia Mitchell declaring a few days later that “these were acts of violence and terrorism”.

This media campaign reached its zenith with Ryan Tupridy on the Late Late show declaring that “what everyone at home just saw, which was, you know, the Tánaiste, the deputy Prime Minister of the country, trapped in a car for two hours, against her will.”

These trials have a key role to play in cutting across that rising confidence by sending a message that protest is criminal and that activists are criminals. That is why the old adage “an injury to one is an injury to all” is applicable here.

Faced with a hostile media and state, the community of Jobstown needs all the assistance and solidarity that can be gathered. This needs to become a major movement of working class communities and young people to defend the protesters. Anyone who wants the right to protest in the future needs to defend the right to protest now, by defending Jobstown!