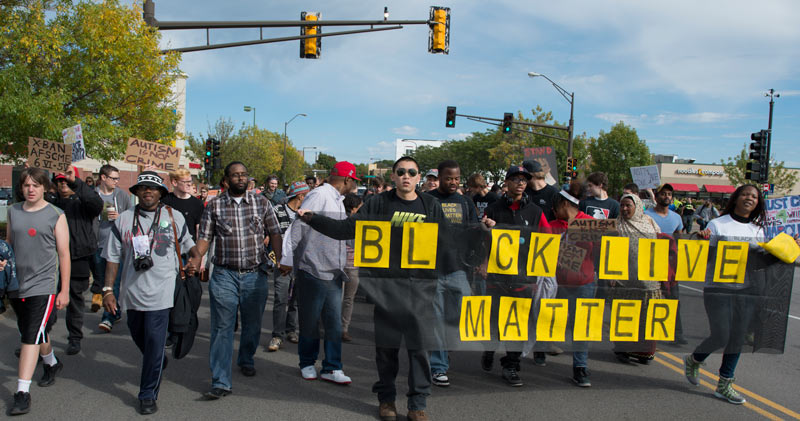 At least 136 black people have been killed by police in 2016 (The Guardian, 7/7/2016). On top of police violence, the black community faces disproportionate unemployment, poverty, a lack of access to social services and mass incarceration. Much-needed protests are erupting throughout the country against the two latest atrocities, the murders of Alton Sterling and Philando Castile.

Unfortunately, five police have been killed by snipers in Dallas. These type of actions will not win justice against racism if that was the intention, and will only serve to strengthen the authority and militarization of the state and undermine the strength of Black Lives Matter mobilizations. Socialist Alternative will continue to participate in mass demonstrations against racism, poverty and police violence and put forward methods to broaden the movement and win victories.

Fifteen year-old Cameron Sterling could not hold back uncontrolled sobbing as he spoke on film after the death of his father. Alton Sterling was killed by law enforcement officers in Baton Rouge, Louisiana on July 5 while selling CDs outside of a convenience store. Alton’s death and Cameron’s reaction at the press conference the following day is a stark reminder of what it means to be black in America today and losing your dad in a gruesome manner as the world watched. Alton’s death is painfully reminiscent of Eric Garner’s death on a Staten Island, New York street on July 17, 2014, by an illegal choke hold.

In a matter of twenty-four hours, in Falcon Heights, Minnesota, Philando Castile – along with his girlfriend and precious four-year daughter – was stopped by officers for a busted taillight. Philando would be shot four times as he reached for his license and died in the back seat of his car; his death was live streamed by his brave girlfriend,  Diamond Reynolds, to show the world he was innocent. Diamond was held overnight in police custody – without food or access to her traumatized daughter – after the murder of her boyfriend. This injustice was correctly met with mass protests and direct action that Socialist Alternative members participated in.

The killings of Alton and Philando sadly confirm the reality described in the remarkable speech by actor and activist, Jesse Williams, at the recent BET Awards about law enforcement terror and systemic racism in our society.

The recent acquittals of the Baltimore law enforcement officers in the Freddy Gray case, and non-indictment decision in the Jamar Clarke case has confirmed for this generation that the American criminal justice system is rigged and stacked up against working people and people of color. There is one set of laws for rich white people like Hillary Clinton and another set of laws for black workers and youth.

The two rebellions in Ferguson and Baltimore in 2014 and 2015 respectively rocked the very core of U.S. society as hundreds of thousands of young people and black workers expressed their rage at law enforcement, the political establishment, and the black mis-leadership class. Over 40 bills were introduced to curb law enforcement terror and enhance police accountability to the community. The Department of Justice and Obama’s Task Force on 21st Century Policing  reports acknowledged the numerous violations and police misconduct in police departments across the country.Yet, the racist police murders, mass incarceration, militarization of the police and rampant economic injustices continue.

Louisiana Gov. John Bel Edwards (D) signed the “Blue Lives Matter” bill into law, making the state the first in the nation where public safety workers are considered a protected class under the hate-crime law. As USA Today highlighted over a year ago, “President Obama has signed into law a measure that will require instant nationwide “Blue Alerts” to warn about threats to police officers and help track down the suspects who carry them out. The city, state, federal governments fortify the “blue wall” with militarized law enforcement that mainly serves to protect the property, prestige and power of the 1%.

Since Ferguson and Baltimore, there’s a heightened class and racial polarization, along with a developing radical consciousness, in society due to the crisis of capitalism. Donald Trump has been whipping up racist rhetoric and attacks while Hillary Clinton defends the policies of her husband that led to mass incarceration and more militarized police. The times we are living through demands a concerted effort to challenge the system of capitalism and racism head on.

In several cities around the country, there were protests to express utter rage at the police killings in Baton Rouge and Falcon Heights. In Dallas, Texas, at a peaceful gathering and march, snipers fired upon law enforcement officers killing five and injuring seven.

If the perpetrators were politically motivated against police brutality  these attacks on law enforcement are totally counter-productive. It takes place in the absence of a strong workers movement to oppose the policies of big business and the racist violence that flows from it.

As Marxist and working-class activists, we oppose terrorist methods which have historically been shown to be a failed method of fighting back against oppression. It is a dead-end strategy that provides the state license to leave a trail of blood from the itchy trigger fingers of law enforcement. Support can be drummed up for institutions of the capitalist state when tragedies like the murders of random law enforcement officers take place.

Working people’s civil liberties and human rights will be further undermined by the state under the cover of pursuing the suspects. These acts can and will have a negative effect on the BLM banner and activists, putting the struggle against law enforcement terror on the defensive and criminalizing the movement and its activists. The deaths of New York police officers Rafael Ramos and  Wenjain Liu in December 2015 brought BLM protests to a halt at that time and allowed the right to viciously attack the movement.

To win victories against racism and poverty, we need mass demonstrations of hundreds of thousands of people on the streets disrupting “business as usual.” Union leaders should support Black Lives Matter in more than just words by mobilizing their members to attend protests with contingents connecting the fight against police violence to the struggles for good jobs, health care, education and public services.

As Shanelle Matthews, the director of communications for the Black Lives Matter Network stated in a recent interview in The Atlantic about organizing for the upcoming DNC and RNC conventions, “Because we’re decentralized, and all of the chapters work autonomously, to each of the chapters in their regions [conventions] mean something different.”

The recent police killings of Alton and Philando places an urgency to centralize and coordinate our movement’s actions, ideas, and message, especially since the corporate media, two parties of big business, and law enforcement will go on the offensive against the movement after the Dallas events.

A united working-class movement using the method of mass protests, non-violent civil disobedience, walk-outs and strikes, based on a program that puts people’s needs first, will be most effective in fighting back against racial and class oppression. As we approach the DNC and RNC, we need a massive mobilization to highlight law-enforcement terror, the agenda of Wall Street and the role of both parties in the rise of the prison state and endemic inequality. Our movement should prepare for marches and possible Occupy Wall Street-style occupations in Washington D.C. to demand justice for Alton, Philando, and all victims of law-enforcement terror as we head towards the general elections in November. The Time is Now!