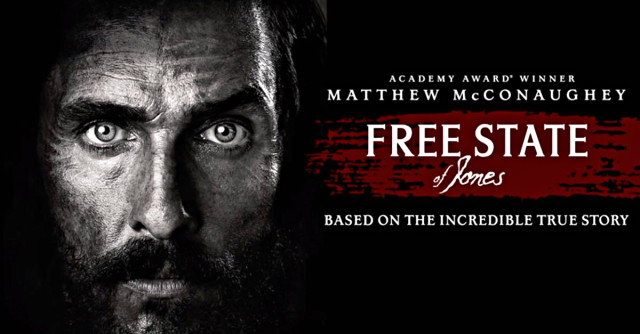 Free State of Jones is a fictionalized account of a true and buried chapter of American history. Director Gary Ross takes this new film where few major films have gone: the radical history of America’s Civil War. Some critics have panned the film for it’s lackluster storytelling and “revisionism.” But what stands out are its themes of revolution and counter revolution in the South. Its release comes at a time when a new generation is rediscovering the traditions of radical solidarity: Black Lives Matter and Bernie Sanders’s “political revolution against the billionaire class.”

The film immediately blows a big hole into a common belief: not every white southerner supported slavery or the Confederacy. The film’s protagonist, Newton Knight, was a white small farmer and fierce opponent of slavery in real life. Throughout the film, Knight, who is portrayed strongly by Matthew McConaughey, makes the link between power, class, and racism in his advocacy of struggle against the Confederacy. The war, Knight says, is “a rich man’s war.” It’s a war for cotton, and both black slave and poor white have reason for common cause.

The film begins with horrific battle scenes in which Knight is a medic in the Confederate Army. After a new law is enacted that exempts rich slaveowners from fighting, Knight decides to desert. When the authorities discover him back home in Jones County, Mississippi he’s forced to flee to the swamps with the support of runaway slaves. They build a camp that swells with deserters and eventually lead a united black and white rebellion against the Confederates. They declare the “Free State of Jones,” independent of the Confederacy and the Union, which they base on new principles for the society they aspire to build, including: “No man ought to stay poor so another man can get rich” and “You walk on two legs, you’re a man. It’s as simple as that.”

The film’s story continues beyond the end of the Civil War in 1865 and into the period of Radical Reconstruction. Together with a former slave Moses, played by Mahershala Ali, who helped Knight early on in the film, Knight and Moses form the Union League, a Republican organization of black and white southerners. They wage a battle to register former slaves to vote. In the face of racist repression, they march together into town to vote, arms in hand, and singing “John Brown’s Body.”

Although a bit clumsy, the film makes the link between the defeat of Reconstruction and the rise of Jim Crow. Scenes from the Jones County Courthouse 85 years later are interspersed throughout the story as the relationship between Knight and former slave Rachel, played by Gugu Mbatha-Raw, develops. Newton Knight’s descendant, Davis Knight, is put on trial for the “crime” of illegally marrying a white woman. Davis Knight, played by white actor Brian Lee Franklin, is alleged to be the descendant of Rachel. Being one-eighth “colored” was enough for a prison sentence in 1950s Mississippi.

These scenes, along with the thrilling multi-racial struggle against the Confederates, are part of powerful statement made by the film. To make his anti-racist politics clear, director Gary Ross even produced a short video online to debunk four common myths about the Civil War, all of which are dealt with in the film.

Undoubtedly, Newton Knight might understandably stand out as another “White Knight” in the fight against racism. But, the themes of solidarity between black and white in the struggle against the rich slave-owners provide a powerful lesson of how systems of oppression can be defeated.

The South and the U.S. as a whole have radically changed since the Civil War. Trump’s success and the daily police harassment and violence against African Americans shows U.S. capitalism still maintains the divide-and-rule weapon of racism. Nevertheless, the basis of racism has been undermined by 150 years of struggle and development of a multiracial working class under capitalism. The mere production of this film, at this time, shows the rising potential for a multi-racial, class-based struggle for the ideals of a truly emancipated society as proclaimed by Free State of Jones.