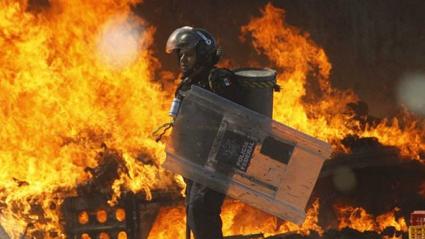 Tens of thousands of teachers in Mexico have been on strike since May 16, led by the National Education Workers Coordinating Committee (CNTE), in opposition to an education reform law that would open the door to mass firings of teachers, weaken public sector unions, and pave the way for the privatization of public education.

The neoliberal government of Enrique Peña Nieto government took a hard-line approach towards the teachers strike from the start, refusing to negotiate with the CNTE, firing more than 4,000 teachers for missing work to participate the strikes, and arresting key CNTE leaders on trumped up charges. The repression took a violent turn on June 19 when, as Telesur reports, “authorities deployed tens of thousands of riot police.” At least 10 people were killed in the hours that followed, most of whom were from the Oaxacan town of Nochixtlan.

In the wake of this tragedy, the CNTE has vowed to continued its opposition to the education reforms, receiving considerable community support. In Mexico City, Andres Manuel Lopez Obrador and the National Revolutionary Movement (Morena) party held an enormous rally with as many as 250,000 people by some estimates in support of the teachers. There has also been a tremendous amount of international support. Seattle City Councilmember Kshama Sawant expressed solidarity with the striking CNTE teachers, on behalf of Socialist Alternative and the Committee for a Workers’ International (CWI), in a letter and video.

The Peña Nieto government, for its part, has refused to back down and Education Minister, Aurelio Nuño, reiterated plans to implement the neoliberal education reforms.

Teachers are at the forefront of struggle against the neoliberal agenda of Peña Nieto and Mexican ruling class.

The CNTE is opposed to the education reform law for a number of reasons. Most prominently, it would allow the neoliberal government to administer standardized tests and use them to evaluate teachers, opening them up to arbitrary attacks. It would also reduce unions’ control over the hiring of teachers and limit the number of unionized workers that the state can employ. Overall, the law would be a step towards privatizing public education in Mexico.

But this struggle is about more than the education reforms. Teachers and public sector unions have been at the forefront of the opposition to the neoliberal agenda of the Mexican ruling class, and the Peña Nieto government hopes to weaken that opposition. René González Pizarro, a Oaxacan teacher and member of Local 22 of the CNTE, summed this up in a recent interview. “It’s about yet another neoliberal government attack on trade unions that demonstrate any type of opposition.” (https://www.jacobinmag.com)

The government’s inability to achieve this goal, in spite of how severely it has repressed the CNTE and teachers, reveals the fundamental weakness of the Mexican ruling class. Capitalism has been an utter failure for ordinary people in Mexico. Not only can it not guarantee jobs with decent wages and living standards to most people; it can’t even ensure basic safety.

Nearly 50% of the Mexican population lives in poverty, including 40 million children, while super-wealthy individuals like Carlos Slim, whose personal wealth is more than $75 Billion, accumulate tremendous fortunes. From 2007 – 2014, more than 164,000 people were murdered. 100 mayors and 1,000 elected municipal officials were assassinated in the last decade, largely because of the drug wars, and the corruption and instability that creates.
Capitalism in Mexico, however, will not fall on its own. More working people will need to follow the lead of the CNTE teachers and wage an organized struggle against the education reform law as well as other attempts by the government to impose its neoliberal agenda. Workers also urgently need a political force capable of providing an alternative vision to the bankrupt system of capitalism. The development of an independent left force like Morena is encouraging, and could provide an important space for ordinary people to build the working class struggle, while grappling to work out a strategy and program to fight against capitalism to build a socialist world where people come before profit.