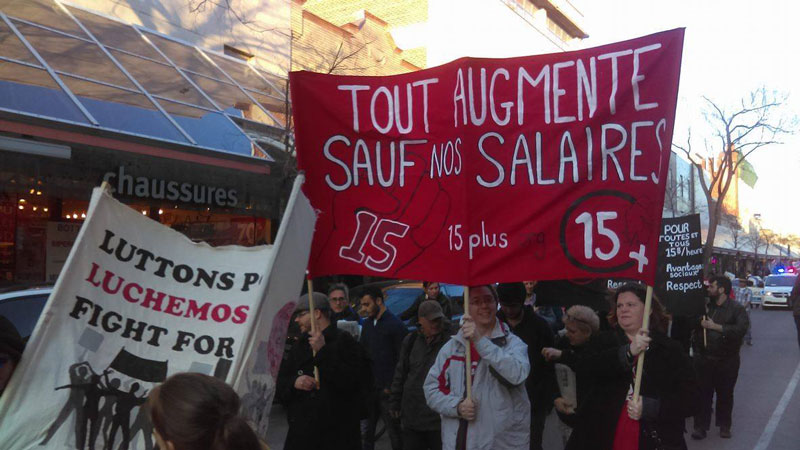 No to an all-class pro-independence alliance

Despite a number of scandals and in the face of growing opposition to its politics of austerity, the Liberal Party of Quebec (Parti Liberal du Québec) retains first place in polls. Though the PLQ has lost a few percentage points of support since its election in April 2014, 33% of those questioned in a recent survey say they would vote for it, with the Parti Québecois (PQ) next at 30%.

In order to both thwart the liberal government and win over a few more electoral districts, the Parti Quebecois has issued a call for a “coming together of the political forces for [Quebec] independence.” By so doing, it stretches out a hand of friendship to the left-leaning and pro-independence party, Quebec Solidaire.

The dismantling of the public sector has put dire pressure on several of its sectors to come up with a straightforward way to “fight the liberals”, which in turn has reopened the old debate on the national question and an alliance of the classes.

There’s nothing new about using the national question to put social questions into “sleeping mode”. This debate took a new turn at the end of April when Quebec Solidaire decided to support the petition of the 15plus.org coalition initiated by Alternative Socialiste-Québec, which demands an increase to $15 an hour now, including salary indexation linked to the increase of the cost of living.

Not one Parti Quebecois deputy was willing to endorse the petition. Amir Khadir, deputy of Quebec Solidaire, responded:

“Who votes for the independence of Quebec? Low-wage workers, in the overwhelming majority. For those in the independence movement focused on a winning strategy, there is only one winning strategy: that is to mobilize those who for the most part live on minimum wage salaries, low incomes, the 99%, in order to win their goodwill, support and engagement.”

With the question of the minimum wage on the table, the Parti Quebecois has shown its true colours, revealing in full the political difference between it and Quebec Solidaire. This will certainly dampen the ardor of those within Quebec Solidaire who seek an electoral alliance with the Parti Quebecois. This question will be debated as part of the next Quebec Solidaire congress at the end of May. Delegates from Alternative Socialiste at the congress will uphold their position: Yes to an independent socialist Quebec, that serves workers’ interests.