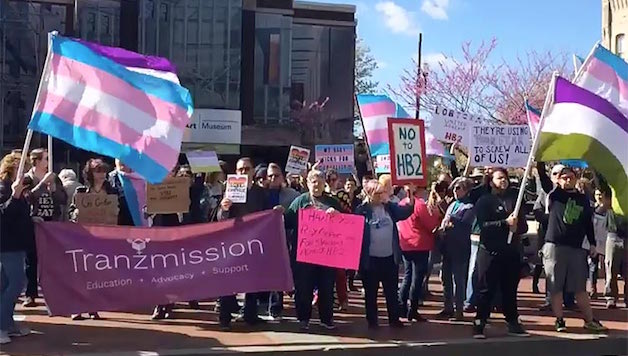 After bills targeting trans people failed to pass in seven states since the beginning of 2016, North Carolina’s legislators held a special session and, in 12 hours, pushed through the first statewide bathroom bill in the country. House Bill 2 (HB2) mandates that people use the bathroom that corresponds with the sex on their birth certificate in government buildings and schools.

Bathroom bills are based on lies about the danger of women being attacked in bathrooms by trans women. However, in reality they have a devastating impact on the lives of trans people, reinforcing the already widespread violence that they face.

Equating trans people to sexual predators has no basis in reality. Already, 17 states and over 250 cities protect the right of people to use the bathroom based on their gender identity. And yet the American Civil Liberties Union reports that not a single instance of a trans person harassing people in a bathroom has been recorded.
But what’s well-established is the violence that trans people face constantly, in particular in bathrooms and locker rooms. This danger is particularly severe for trans women. The highest recorded number of reported murders of trans women in the United States in a single year was in 2015. Madeleine Gauss, a transgender woman living in Raleigh who testified at the North Carolina hearing, explained, “I can’t use the men’s room. I won’t go back to the men’s room. It is unsafe for me there. People like me die there” (NCCapitolConnection.com, 3/23/2016).

Despite making up less than 1% of the population, a trans woman is murdered every 29 hours. Trans bathroom bills reinforce this horrendous violence.

Does the GOP Suddenly Want to Protect Women?

The Republican Party is not on a crusade to protect women. In reality, the same forces attacking LGBTQ rights are simultaneously waging an unrelenting campaign against women, in particular on reproductive rights.

Since 2011, more than 280 laws have been passed across 31 states to limit or restrict access to abortion. There are now whole sections of the South where access to abortion, particularly for poor women, has been essentially eliminated. Through making quality reproductive health care more expensive, more grueling, more time-consuming, and more shaming, the right has ravaged reproductive rights.

It’s not trans people who threaten women’s safety. It’s the ongoing right-wing attacks on our rights and our standards of living at the national, state, and local levels. And it’s the systemic sexism that capitalism foments, holding all working-class people back.

Cover for Attack on Equal Rights

North Carolina’s bathroom bill is not only devastating for trans safety, it was used as cover for a broad attack on LGBTQ people. HB2 is a sweeping statewide law that repeals nondiscrimination ordinances protecting LGBTQ people. It was quickly called the most anti-gay law in the country.

Polling shows that Americans overwhelmingly support laws protecting LGBTQ people from discrimination. But the bathroom aspect of HB2, which is laced with confusion due to the right-wing offensive, was used as a scare tactic to repeal these protections.

This legislative session has seen 44 anti-trans bills introduced in 16 states, double the number that were filed in the previous legislative session. The North Carolina legislation even further shows how attacking transgender people has become the sharp end of attacking all LGBTQ people in the wake of the victory on marriage equality.

Growing out of the radicalization of the Moral Mondays movement, the NAACP has said that, unless HB2 is repealed, they will carry out mass civil disobedience protests. This is an excellent example of how the outrage from North Carolina’s bathroom bill can help to galvanize a serious struggle against the right. The growing political polarization in U.S. society, brought even more to life by the Sanders campaign, has emboldened more and more people to fight back.

This stands in contrast to the halfhearted role of Democratic politicians on this issue – in fact, one third of the Democratic caucus in North Carolina voted with the right to pass HB2. If the Democratic Party was serious about civil rights and LGBTQ rights, they would expel these people. The Democrats are opposed to any serious struggle and, therefore, can in no way be relied on to fight for the rights of LGBTQ people. Nor can any reliance be placed on corporate entities who oppose this bill because they see it as bad for business.

Socialist Alternative unapologetically stands for LGBTQ rights, including the right to use facilities based on gender identity. We must fight all discrimination, including the disproportionate poverty, incarceration, inadequate health care, and unemployment that so many LGBTQ people face. This struggle must be linked to building a mass movement centered on the social power of working people to defeat the entire right-wing offensive against the LGBTQ community, women, immigrants, people of color, and other oppressed groups.