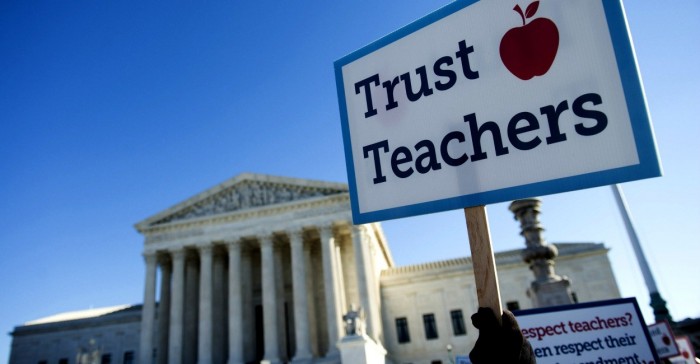 Yesterday brought great news for the labor movement, with the Supreme Court affirming the dismissal of Friedrichs v. California Teachers Association (CTA), a lawsuit that was aimed at undermining public sector unions and the labor movement in general.

If the ruling had gone the other way, Friedrichs v. CTA would have reduced the entire public sector to “right to work” status. This would have been a travesty for workers and their families.

While we should celebrate, we must remember that this ruling was won by chance. We cannot rely on appointments or circumstantial developments at the highest levels of the establishment to avert disaster. To protect our rights and usher in a new era of gains for working people, we need to unite,systematically rebuild the labor movement, and leverage our collective power together.

Our victories in the fight for $15/hour in 2014 and the Seattle Education Association strike in 2015 serve as reminders of how we can win if we get organized, formulate concrete demands, and fight unrelentingly.

This weekend, I will be in Chicago for the Labor Notes Conference. I will also be there to stand in solidarity with my sisters and brothers in the Chicago Teacher’s Union (CTU) as they go on strike in defiance of the politics of austerity and privatization being pushed on the city by their Mayor and former White House Chief of Staff Rahm Emanuel.

Like the Seattle Education Association’s strike, the CTU have widespread public support. Fight for 15 organizers and other social justice activists will be joining the teachers on the picket line.

This is precisely the kind of solidarity we will need, across regions and struggles, to wrest real victories from the billionaire class and rebuild a fighting labor movement.