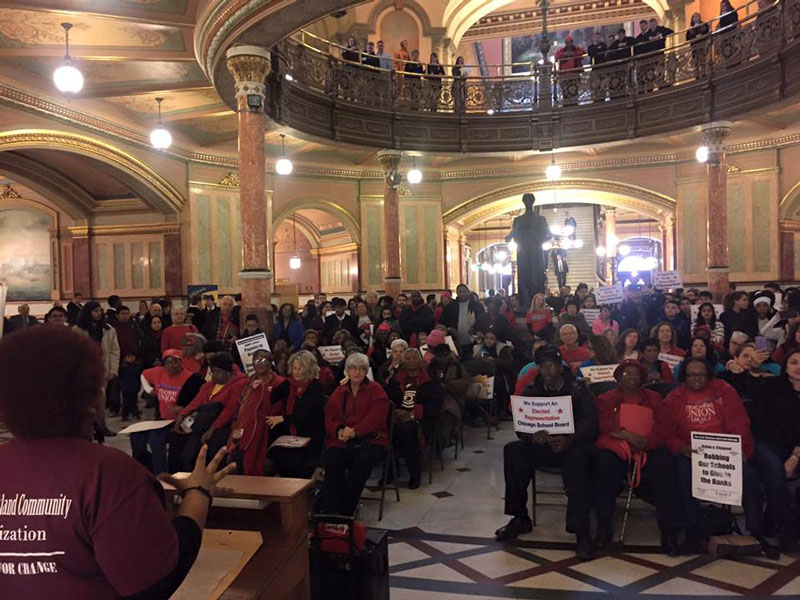 The ongoing fight between the Chicago Teachers Union and “Mayor 1%” Rahm Emanuel may be heading toward the second teachers’ strike in four years. What is driving the current phase of this fight is the attempt by corporate politicians to deal with the fiscal crisis caused by systematic, longterm underfunding of public-sector workers’ pension funds by state and local government through cutting benefits or, in this case making workers take an effective 7% pay cut.

Last December, CTU members voted overwhelmingly to authorize a strike unless Emanuel and the school board deliver a contract that meets the needs of teachers and that will improve public schools in the city.

Negotiations between the CTU and the Chicago Public Schools (CPS) Board of Education are now effectively stalled. The most recent offer from the Board, initially described by CTU leaders as a “serious offer,” was unanimously voted down by the union’s 40-person “Big Bargaining Team” after seeing the details. Even the apparently good aspects of the offer began to smell bad when, at the eleventh hour, the Board indicated that they would not apply unless more than 2,000 teachers took early retirement within the first year of the contract.

The Board’s response to the bargaining team’s rejection of the offer was to announce that it would unilaterally cease to pay its portion of the pension payments – equivalent to 7% of each employee’s salary.

This vindictive response, correctly described by CTU president Karen Lewis as an “act of war,” was a tactical mistake on the part of newly-appointed Board Superintendent, Forrest Claypool. As a result, the union may have legal grounds for an unfair labor practice strike, in which case it would not need to wait for the normal “fact-finding” process to be complete. It is hard to see why Rahm – already facing record-low popularity due to the suppression of the video recording of the police murder of Laquan McDonald in the run-up to his re-election – would want to take on the CTU at this point in time.

The situation has stoked an already-angry mood among teachers. This is because of their experience of living with the last contract. Many of the gains that were won through strike action in 2012 ended up being unenforceable. Also, the last contract failed to prevent the closure of almost 50 schools – a massacre of public education that fell hardest on the most deprived communities and cost thousands of jobs. The membership and the bargaining team are justifiably suspicious of anything the Board is offering them.

On February 4, the union called a mass rally in Chicago’s financial district. Five thousand teachers and supporters filled downtown streets. They protested not only Rahm Emanuel’s policies, but also Illinois Governor Bruce Rauner’s recent announcement that he is considering declaring the Chicago schools as “failing,” which would allow the state to take them over. This is an ominous threat by a right-wing governor who is cut from the same cloth as Wisconsin’s Scott Walker.

The union is building community outreach in preparation for serious struggle. Parents and community members joined students and teachers for “walk-in” protests – part of a national day of action against attacks on education happening outside schools before the school day began on Wednesday, February 17. Over 200 Chicago schools participated. This type of mobilization must continue and be spread to all city schools and communities.

Other unions need to join this fight. Only by actively supporting each others’ struggles can the unions hope to stop the corporate assault. Unfortunately, AFSCME, another major public-sector union that is threatened by Rahm’s billionaire friend Rauner, did not turn out in support of the teachers’ rally. Rank-and-file members need to build links to start to overcome this failure of leadership.

Defeating Rahm and Rauner requires an industrial and a political strategy. The CTU should actively seek to bring all Rahm’s opponents onto the streets in the coming weeks in support of workers’ rights and public education. If it comes to a strike, the CTU and Karen Lewis clearly have the capacity to galvanize the enormous anger at inequality and structural racism in Chicago into mass support and, if they win, strike a decisive blow for working people across the whole country. Such a victory would also pose sharply the question of launching a new political force of the 99% in Chicago, with the CTU playing a key role, which could truly challenge the domination of the 1% in the years ahead.