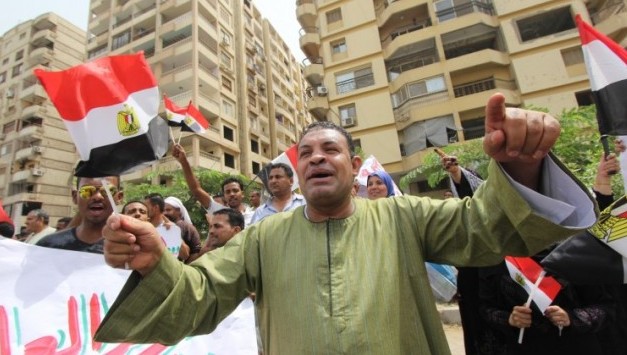 Egypt’s workers are starting to take action again, after a year when few struggles took place. The past few weeks have seen a number of strikes and protests. President Abdel Fattah Al-Sisi’s regime has brought back repressive measures used by former President Hosni Mubarak’s regime. Workers taking industrial action are labelled as terrorists and subject to sackings and imprisonment. However there are signs that workers are beginning to have had enough.

A trigger for a wave of protests has been Sisi’s new laws. The Terrorism Law, first proposed by Mubarak in 2005 and ratified by Sisi on August 16th, describes “disturbing public order” and “undermining national unity, social peace and national security” as terrorism. It also includes targeting state or public property or obstructing authorities.

Those found guilty of “establishing or leading terrorist organisations” face the death penalty. The police are absolved from legal responsibility while dealing with ‘terrorists’ – allowing torture. The president can impose a curfew and isolate areas for up to six months, subject to parliamentary approval.

The Protest Law says any gathering of ten or more people in a public place, peacefully expressing political opinions or demands, must apply for a permit from the interior ministry three days in advance. Penalties for breaking the law range from one to seven years in prison and/or fines of LE50,000-300,000.

But these new laws did not stop low-ranking police officers in Sharqiya province striking on 22nd August, demanding access to police hospitals reserved for higher-ranking officers, overdue bonuses, higher pensions, meals and a promotion process. Hundreds took part in a sit-in at the provincial security headquarters in Zagazig, attempting to storm the building. Six police stations were closed as more police joined the action.

Strikers were angered when a TV news anchorman claimed their pay had been raised to LE6000-7000 a month. A spokesperson called the TV station to say his pay was LE3100 after 25 years service, but the producer refused to take it.

Riot police were sent in and fired tear gas. Strikers responded with stones and by firing gunshots in the air. There were injuries on both sides. Soldiers joined the protest demanding similar rights. Police associations from seven other parts of the country made solidarity statements and delegates from Cairo and Sohag joined the protest. After four days, Prime Minister Ibrahim Mehleb agreed to meet most of their demands and the action ended.

Despite the new Terrorism and Protest Laws, no prosecutions against striking or demonstrating police were made. Assistant interior minister, Major General Abu-Bakr Abdel-Karim, said the “protest rally” did not include violence or rioting and so the laws did not apply! The most repressive laws cannot stop a determined and united struggle – as the January 25th 2011 uprising showed. Workers will have noted that the government made concessions in the face of a threat to their control of the state apparatus.

Another struggle has involved 400 journalists on the Al-Tahrir paper. The owner, a businessman who was a member of Mubarak’s ruling party, announced its closure without notice. The journalists began a sit-in at the head office. “We have been more critical of the government recently, bringing pressure to bear on authorities, which officials do not like,” a protesting reporter said. “That’s a political crisis not a financial one. It’s an attempt to muzzle freedom of opinion and expression.” (Ahram Online 2.9.15)

During August, three Egyptian newspapers were prevented from being printed or distributed because they had content critical of the president. At least eighteen journalists are in prison, most notoriously three Al-Jazeera journalists sentenced to three years (including an Australian sentenced in his absence).

The new Civil Service Law cuts pay and jobs, despite government claims that it would raise wages. 6 million public sector employees are affected.

Over 2,000 employees of the Customs and Tax Authorities demonstrated in Cairo against the law on 10th August after pay cuts. A demonstration on September 12th has been called by a new independent coalition of thirty unions, Tadamon (Solidarity). Over 40 unions have announced they will take part, including teachers’ unions demanding the removal of Education Minister Moheb al-Rafie, the introduction of educational reforms and better working conditions.

A group of doctors, nurses and pharmacists, supported by the Doctors’ Syndicate, have called for a partial strike on 1 October against the Civil Service Law. Another group of doctors have called for an indefinite strike from 15 September, with a list of demands including raising the minimum wage to LE4000 a month and removing the Health Minister, Adel Al-Adawi.

A big workers’ national demonstration would mark a new development. From the 2011 uprising against Mubarak to the 2013 huge demonstration against Muslim Brotherhood (MB) President Morsi, workers generally participated in demonstrations as individuals rather than as an organised class.

Tax cuts for the rich

While working class and poor people continue to suffer, taxes on the rich and big business have been cut. 5 percent additional income tax on big businesses has been scrapped. 10 percent capital gains tax has been suspended. A cut in income tax from 25 to 22.5 percent will mostly benefit the rich. Despite a small concession to the lowest paid – income tax starting after earning LE6500 a year instead of LE5000 – this is still less than half the official public sector minimum wage of LE14,400 a year.

Minister of Investment Ashraf Salman has spoken in favour of privatisation of education and health sectors. This follows the government allowing the private sector to own and operate power stations. Salman said: “We can’t fulfil all the needs of education, so you have to invite the private sector by liberalising prices.” This, he said, will open up chances for investors, either domestic or international. (Daily News Egypt 9.9.15)

Sisi’s government continues to repress the Muslim Brotherhood, with 343 arrested in August on charges of belonging to the organisation. The striking police were accused of being incited by the MB, although no evidence for this was shown. Sisi’s support will fall as it becomes clearer that it is big business and the rich who are benefitting from his regime, rather than ordinary Egyptians who suffered under the previous regime of MB president Morsi.

Parliamentary elections are taking place in October. While political parties and independents, many linked to Mubarak’s former regime, jostle to register candidates, working class and poor people’s voices are not currently represented by a mass party. The growing number of struggles – in particular the 12th September demonstration – show the potential to build such a party.

The stormy events since the magnificent movement that overthrew Mubarak in 2011 show the desperate need for working class and poor people to build an independent political party, instead of following those who stand for a continuation of capitalism and its exploitation.

All state repression must be opposed. It is always used against workers’ and youth struggles. This must not mean sacrificing independent working class organisation. While at times it is necessary for socialists to march with other genuine pro-democracy movements and parties, but only the working class can develop the necessary organisation, solidarity and socialist programme to end the horrors of decaying capitalism.

Such a movement would draw behind it all who are exploited and repressed, not only in Egypt but throughout the Middle East and North Africa. This is the essential condition for the establishment of real democracy, ending all poverty and exploitation.