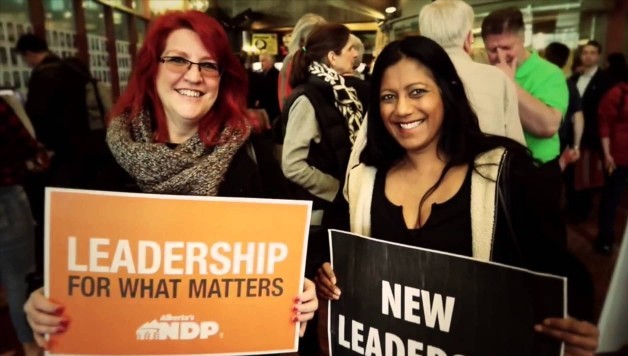 The people of Alberta have delivered a stunning election result, upsetting the landscape of Canada. There were headlines in the US about Canada’s Texas electing a socialist government.

The Conservatives were kicked out of office after 44 years and the New Democratic Party (NDP) won a majority government. The NDP won 41% of the vote and 54 out of 86 seats, sweeping every city with over 50,000 people. They also won 11 rural and semi-rural seats.

The province, the centre of Canada’s oil and gas industry and home to the tar-sands, is reeling from the collapse in oil and gas prices. Most of past job growth was based on the oil industry – often dirty and dangerous jobs in the tar-sands. The province’s finances face an $8 billion deficit, the economy is falling into recession and unemployment is climbing.

The Conservatives announced a crisis austerity budget in March 2015 and then called a snap election for May 5 hoping to win before the cuts hit home. The proposed budget had 59 increases in taxes and fees for working people; a modest increase in taxes for those with an income of over $100,000 a year; cuts to health, education and other services; and no tax increase on corporations. At 10%, corporation taxes in Alberta are the lowest in Canada and in a pre-budget government survey asking how to deal with the budget the most popular response, with 70% support, was tax the corporations.

The Conservative governments have always been close to the oil and gas industry.  The revenue from the energy sector, between $9 and $12 billion a year, provided around 25% of the provincial government’s income. This allowed the government to have one of the lowest tax levels for both people and companies and no sales tax, while spending on public services per person was around the Canadian average. Although Alberta has a long history of Conservative governments, the people of Alberta are not ideologically committed to neo-liberalism.

The Tories, led by Alison Redford, had won the 2012 election by campaigning to the ‘left’ against the right-wing populist Wildrose party, gaining votes from the NDP and Liberals. However, hostility within in her own party and a series of scandals forced her resignation in 2014.

Prentice, an ideological Conservative, who had been in Prime Minister Stephen Harper’s federal cabinet for eight years, became leader in 2014. After resigning as a federal MP in 2010 he became a senior executive with one of the big five Canadian banks, CIBC, and worked with Enbridge, the company seeking to build a widely opposed tar-sands pipeline to the west coast. Compared to Redford, Prentice’s leadership moved the Alberta Tories more in line with Harper’s neo-liberal and pro-big oil agenda. He convinced 11 of the 16 Wildrose MLAs (Members of the Legislative Assembly), including the party’s leader, to cross over to join the Tories. While this increased the Conservative’s majority, to most Albertans it was seen as opportunist and politically dishonest.

Prentice’s favouring of big business and the oil and gas industry in response to the fall in energy prices was out of touch with the mood in the province. Albertans were hurting from the drop in oil prices and angry at the government. The overwhelming majority of Albertans, 86%, thought the province’s economy was too dependent on oil and gas and 71% thought the oil and gas companies do not pay enough in royalties to the province. The provincial Tories had squandered much of the past oil and gas revenue with only $17 billion set aside in the Heritage Fund.

Prentice was seen as arrogant, a view reinforced by him telling Albertans to “look in the mirror” to see the cause of the province’s problems.

The right-wing vote was split between two parties, Wildrose in disarray after defections, and the Conservatives, led by an arrogant Prentice. This helped the NDP but the key to its victory was its election platform. This generated enthusiasm with many young people turning out to work in the election campaign and the highest voter turnout in 20 years. The NDP, Canada’s left leaning party with roots in social democracy, put forward a radical platform which put the needs of Alberta’s working people above the energy corporations. They promised to raise the minimum wage to $15 an hour by 2018, increase taxes on the rich and corporations, reverse the cuts to public services and not implement many of the taxes and fees – including the planned introduction of monthly health premiums.

During the campaign the right-wing parties, Conservative and Wildrose, attacked the NDP’s commitment to raise corporation taxes to 12% claiming it would destroy jobs. At 12%, the rate proposed by the NDP, Alberta’s corporation taxes rate would still be lower than in most of Canada. Most companies are in Alberta for the resources – which cannot be moved. Furthermore, US investment, which is a significant factor in Alberta, would not feel any impact. This is due to the ‘treasury transfer effect’, whereby the US government taxes all US foreign profits at 35% (minus taxes paid in the host country).  The 2% increase in Alberta’s tax rate means a slightly smaller tax income for the US government – more of the revenue staying in Canada is the only change.

The NDP aims to tackle the dependency on fossil fuels with promises to diversify the economy and refine the tar-sands bitumen in Alberta. They have proposed an increase in the production of renewable energy and a boost to energy efficiency. They also stated they would review the royalties the oil and gas industry pay, which has wide public support, as they are currently some of the lowest in the world.

The Alberta NDP has never formed the government. This means people are more hopeful than in the provinces which have seen past NDP failures. In addition, the party is less dominated by the cautious politicians and party apparatus compared to some other provinces.

This result adds to the problems for Harper, who faces a general election later this year. Alberta is his home province, and the original power base of Harper’s right-wing ideology. Already Harper’s economic strategy, based on fossil fuel exports, is in disarray. His attempt to whip up paranoia over terrorism has failed to gain mass support. The court case of Harper-appointed Senator Mike Duffy may produce embarrassing evidence. Now even his hometown of Calgary has turned against his party.

The Alberta election result has boosted the federal NDP in the run up to the autumn election. It demonstrates the possibility of rapid changes, although Albertans have never been as right-wing as has been claimed.

Although not a socialist platform, the Alberta NDP’s platform contrasts sharply with the very weak policies of the BC and Ontario NDP in recent provincial elections that ended in defeats. Alberta proves that a radical platform can win elections.

In the past the federal NDP leader Mulcair has stated he would like to emulate New Labour in Britain. After seeing the results in Alberta and Britain, hopefully, the federal NPD rejects that aim and campaigns on a radical platform in the upcoming federal election.

The NDP in Alberta won on promising improvements for working people. However, promising reforms in an election and delivering them are two very different things. Alberta’s economy is weaker due to the collapse in oil prices. The world demand for oil is slowing as the Chinese economy slows.

The oil barons are used to running the province and will seek to do the same, regardless of who is the elected government. The Alberta NDP government will face enormous pressures from big business, especially the oil and gas companies, to abandon its election promises. The Alberta labor movement and others must build a mass movement to counter the corporations. The battle to deliver a $15 minimum wage and the other reforms has only just begun.

To really deliver secure safe jobs and a healthy environment will require more than electing a moderately reforming NDP government; it needs taking control of the wealth of resources in Alberta and democratically using them for the benefit of society.

For a more extensive analysis of Canadian Prime Minister Harper’s oil policies read the following article at SocialistWorld.net, the website of the Committee for a Workers International (CWI):  http://www.socialistworld.net/doc/7218