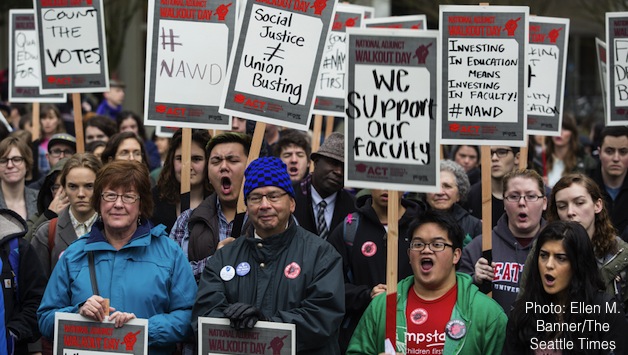 On February 25, Seattle University (SU) adjunct professors, together with hundreds of student and faculty supporters, walked out of classes to demand higher wages, better working conditions, and the right to form a union. Throughout the country, thousands participated in National Adjunct Walkout Day.

With few benefits and little opportunity for career advancement, adjunct professors are treated as low-wage contract workers. Crammed into overcrowded offices, they face countless hours grading papers and mentoring students off the clock. They have short-term, contingent contracts that offer no job security. Many adjuncts who hold doctorates even qualify for food stamps. These conditions are directly related to adjuncts having no union to support them.

The adjunct faculty of SU have been working for years to unionize because they know that a only a union would give them the power they need to negotiate an improvement in their conditions. Seattle University, a wealthy private institution that charges its students $35,000 a year, has spent time and money on busting up unionizing efforts because it knows unions would give the adjuncts power.

In 2014, the adjunct faculty put the union question to a vote, but Seattle University took possession of the ballots and refuses to count them. However, the National Labor Relations Board has now ruled that SU must count the ballots.

Kshama Sawant, who is a member of the American Federation of Teachers Local 1789 and former SU adjunct professor, enthusiastically supports adjunct professors in their struggle and spoke at the SU rally. She also wrote a letter of solidarity letter to them, which can be viewed at: sawant.seattle.gov.

Socialist Union Leaders Say: Labor Must Go All Out to Support the Alabama Amazon Workers!