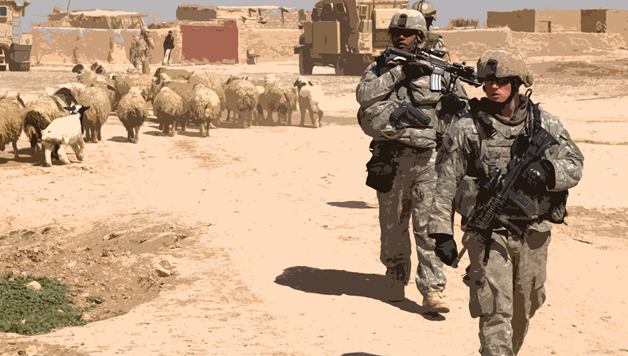 No to Endless War

People are understandably horrified by the litany of highly publicized beheadings by the Islamic State of Iraq and Syria (ISIS) and its affiliates, as well as the terrorist attacks in Europe carried out in its name. The Obama administration is seizing on this outrage, reflected in polls supporting military action, to push Congress to give retroactive legal authorization to the campaign he has been waging for months. But people should not be fooled: this campaign will do nothing to end the conditions that have fueled the growth of ISIS.

Twenty-five years of nearly constant U.S. military engagement in the Middle East have brought the following results: hundreds of thousands of civilians killed, millions of displaced people, the opening up of bitter sectarian division, and thousands of dead American soldiers. We should be clear that the priority of the U.S. elite is not the suffering of ordinary people in the Middle East but maintaining their global power and prestige. Of course Bush’s invasion was also driven by the desire to control the enormous oil resources of Iraq.

ISIS is the direct product of the occupation of Iraq and the policies pursued under Bush. U.S. and allied forces leaned on sectarian Shiite forces to replace the Sunni-dominated regime of Saddam Hussein, former dictator of Iraq, and now it has completely backfired. ISIS is the extension of Sunni resistance to the Shiite-dominated state. It is also an utterly reactionary organization which poses a mortal threat to religious and ethnic minorities or anyone who stands in its way.

The authorization request is deliberate in its ambiguity. It places no geographic limitation on U.S. military action. It contains loose language about what kind of military action will take place. It gives the president the authority to use what force he “determines to be necessary and appropriate,” while not permitting “enduring offensive ground combat operations.”

Obama claims that he is completely opposed to a major commitment of U.S. troops, as in Iraq and Afghanistan. But this authorization is a slippery slope. The reality is that, although ISIS has been pushed back a bit in Iraq and lost the battle in Kobani, it now apparently controls a quarter of Syria’s territory, and numerous jihadist groups in North Africa are pledging allegiance to it. In short, this will be a protracted military campaign and American troops will be dragged in.

The Obama administration tries to justify its new request with the alleged “successes” of its bombing campaign. But in Kobani, bombing alone would not have defeated ISIS. It took the ferocious resistance of Kurdish fighters. And in Iraq, the U.S. relies on bloodthirsty militias from a Shia background who are the mirror image of ISIS.

While leading Republicans claim they want to go even further than Obama, sections of the establishment are openly questioning Obama’s strategy. To them, Obama seems not to have learned the lessons of the disastrous Iraq campaign, an enormous blunder from the point of view of the long term interests of the elite. But the truth is that the U.S. is now in a deep quagmire, and it can’t find the exit.

And all of this is to what end? As the blowback from the killing fields of the Middle East leads to horrific terrorist attacks in European countries, the promise that all the wars would lead to a safer life for working people seems to be receding by the minute. The question that presents itself is, how do we stop the madness?

How to Fight ISIS

The way to fight ISIS is not through U.S. intervention, which will drive more people into its ranks. The working class and poor of the Middle East must draw on their own strength across religious and ethnic lines to oppose both imperialism and the reactionary influence of fundamentalism. Where possible, they should immediately create democratic multiethnic self-defense units based on wider organizations of working people. Such a class-based alternative could quickly attract mass support and undercut the appeal of fundamentalism. Here in the U.S. and in other Western countries, a movement must be built to oppose the policies of endless war, against racist profiling of Muslim immigrants, and in solidarity with the struggles of working people in the Middle East.

There are today more displaced people in the world than at any time since World War II, millions of them in the Middle East. This fact alone shows that, under capitalism, there is no way out. Only on the basis of overturning capitalism and creating an international socialist order can we finally begin to put this horror behind us.