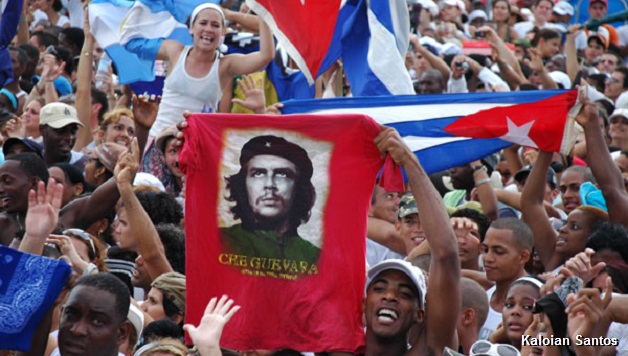 On December 17, President Obama ordered the restoration of full diplomatic relations with Cuba for the first time in more than a half-century. The limited lifting of the policy of isolating Cuba and beginning to normalize relations came after 18 months of secret talks.

This is not a full lifting of the embargo, which would require an act of Congress – highly unlikely. For example, while travel restrictions have been eased, general travel for tourism will still not be allowed.

More Than 50 Years of U.S. Embargo

Nonetheless, the Cuban people themselves may well regard this as a victory for the Cuban Revolution, as the U.S. swore to lift the embargo only when the Castro regime was removed. Though Cuba itself has had to endure many hardships, Obama’s decision signals that the U.S. is renouncing the approach of a full restoration of property ownership through counterrevolution.

Yet it’s hardly likely that Obama took this step for humanitarian reasons.

The essence of what the U.S. is doing is not removing the embargo but fine-tuning it to allow U.S. and global capital to more easily enter the Cuban economy. Penetration by the international banking system into the Cuban economy will begin, as U.S. institutions will be able to open accounts at Cuban banks. Travelers to Cuba will be allowed to use American credit and debit cards. Taking Cuba off the State Sponsors of Terrorism list will make it easier for Cuba to get loans from foreign lenders.

Many U.S. companies are salivating at the prospect, and the U.S. Chamber of Commerce fully supports the move. There is also significant support in the political establishment, despite the opposition of a large part of the Republicans in Congress.

What this may well do is accelerate the process, already underway, of “reform” pointing toward the restoration of capitalism. The current Cuban bureaucratic regime is not of one mind on how to satisfy an increasingly restless younger generation tired of economic stagnation. Raúl Castro looks to the “Chinese road” – opening up Cuba to market forces while maintaining the domination of the current bureaucracy. Obama´s move, though pushing back the aspirations of the Miami-Cuban oligarchy, may open the way for some section of this bureaucracy to represent the interests of international capital in trying restore domination over the Cuban people.

But the tying of Cuba to the coattails of international capital would likely arouse the wrath of the people of Cuba, especially of older Cubans who are a strong reservoir of support for the gains of the revolution. Restoration of capitalism would be a huge setback for the people of Cuba and for the workers’ movement of the whole region.

The only way out of this trap is for the ordinary Cubans to take the country into their own hands, to build assemblies in workplaces and neighborhoods and bring together elected representatives on all levels, subject to recall and without any privileges. This is needed to openly discuss all the mismanagement and problems the economy and society face. The current repression against parties and media expressing the needs of the masses must be lifted. This can be the basis to democratically plan the economy and appeal to workers and youth internationally to challenge U.S. imperialism and capitalist domination of the world, and to build toward international socialism. That means carrying through a political revolution in Cuba, using the power of the people to remove the bureaucracy and establish a real workers’ democracy.