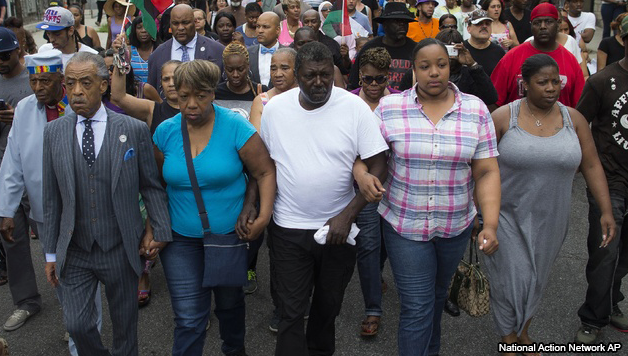 An Uprising Against Police Violence

A Staten Island, New York, grand jury announced yesterday that it will not indict police officer Daniel Pantaleo for the illegal chokehold death of father of six and Staten Island resident, Eric Garner. This stunning announcement comes on the heels of the explosive wave of protest in Ferguson, and nationally, following the announcement that police officer Darren Wilson wouldn’t face trial for the killing of 18 year old Michael Brown. It is clear that the racist capitalist system in this country has a total disregard for the lives of working people, poor people and particularly black and brown youth whose lives are deemed disposable. Police kill black Americans at nearly the same rate as the lynching during the Jim Crow era and young black men are 21 times more likely to be shot dead by police than white men. The righteous indignation of working people and youth protesting the grand jury announcement last night is justified and must be escalated to end this daily misery.

“A Gentle Human Being” The friends and family of Eric Garner describe him as a gentle human being. On July 17, he was approached by plainsclothes police officers as he stood on a Staten Island street allegedly selling loose cigarettes. He had had previous encounters with police over the same issue. This time he declared he would not be harassed by the police anymore. Officer Pantaleo applied a banned chokehold to Garner and continued to apply it after he took Garner to the ground. Garner called out “I can’t breathe”. Even after Panteleo released Garner, EMT personnel stood idly by and allowed Garner to die at the scene. The events of this police killing were recorded on film by Ramsey Orta, who was harassed by the police and subsequently indicted on a weapons charge. Orta correctly stated the charge was retribution by the police for his video and unwavering support for the Garner family.

The website FiveThirtyEight.com states that “The FBI reports that in 2011, cops in America killed 404 suspects in acts of ‘justifiable homicide’.” Astonishingly though this number likely doesn’t include every civilian fatality that year since it relies on voluntary reporting and doesn’t include police homicides that aren’t deemed “justifiable”. Still, 404 is a huge number. By comparison, just six people were killed by police in Australia over the same period. Police in England and Wales killed only two people, and  German police killed six. (http://www.businessinsider.com/why-do-us-police-kill-so-many-people-2014-8#ixzz3KttKriXu).

As a recent New York Times editorial pointed out, the scale of cop harassment and killings shows why in many black communities, “the police are justifiably seen as an alien, occupying force that is synonymous with state-sponsored abuse.” (The Meaning of the Ferguson Riots, NY Times editorial, 11/25/14) But while police brutality disproportionately affects poor African American communities, hundreds of whites and Latinos are also killed by the police on a yearly basis often in highly dubious circumstances. No warning police raids and shoot to kill police procedures are the norm across the US particularly in poor communities.

The Ferguson and Garner verdicts highlight the inability and unwillingness of big business and its two parties (Democrats and Republicans) to seriously address or even curtail the militarization of the police and the systemic nature of police violence. The role of the police under capitalism is first and foremost to defend the interests, property and prestige of the ruling elite by any means. In general the elite have seen the militarization of the police, on top of the criminalization of large sections of black youth and mass incarceration, as a key part of maintaining social control. Fear of crime is used to divide the working class on racial lines while poor black communities face a virtual police state. While some in the ruling class are raising the need to scale down the war on drugs or introduce some reforms of the police there are very serious limits to how far the ruling class as a whole are prepared to go. For example, President Obama recently reviewed the sale of military equipment to police departments and decided to make no changes.

In New York City, Bill de Blasio was elected mayor a year ago partly because of his promise to end the hated stop and frisk program. De Blasio did indeed significantly scale back stop and frisk, an important step forward, but at the same time he brought back former police commissioner, William Bratton, the master mind behind the “broken windows” and “quality of life” aggressive policing doctrine. It was the policies and training of the NYPD and big business that led directly to Garner’s death. It is not an aberration; the whole system is guilty.

The response by Bill de Blasio to the Garner decision was lukewarm and sentimental and he did not openly condemn the decision as some local elected officials did. Meanwhile President Obama’s White House summit with many mayors following the events in Ferguson touted the allocation of 260 million dollars for body cameras for officers and a national commission to review the militarization of the police. Body cameras would be a welcome reform but they would not have kept Eric Garner alive given that officer Pantaleo knew he was being filmed. A deeper question is what would it take to secure a successful conviction against a police officer who killed someone given the enormously broad police “rules of engagement”. The limitation of Obama’s commission is also shown by the choice of Charles Ramsey as one of its co-chairs. Ramsey, former chief of police in Washington D.C. and Philadelphia, is known as a law and order stalwart and defender of militarized policing.

The ruling class will not concede any weakening of overall police powers without a major social struggle by the working class, particularly by black and brown workers and youth. The labor movement must play an active role in this struggle for racial and economic justice. Police repression which targets black youth today will be used against workers’ struggles tomorrow as it has been repeatedly in the past in the US against important strikes and battles for better wages and working conditions. “Power concedes nothing without a demand. It never did and it never will.”

Our movement is posed with a serious question of how to deal with police accountability and control. Socialist Alternative calls for local policing to be overseen by committees of democratically elected representatives from the trade unions and the community. These committees should have the power to hire, retrain and fire police officers, and to shut down police stations known for corruption and misconduct. This is a crucial tool to combat police violence as part of challenging capitalism’s control over society. The attorney general Eric Holder has announced a federal investigation of the Garner case. We have little faith in this process. We must demand the overhauling of the role of the grand juries and prosecutors in all these cases. Socialist Alternative demands full independent investigations in Ferguson, Staten Island and all other cases of police killings led by representatives of affected communities and workers organizations with subpoena, indictment, and prosecution powers.

The movement against police violence

The movement on the streets against police violence can become the beginning of a new black freedom movement. Such a movement must also take up the economic devastation which is being caused by capitalism. It is under President Obama’s watch that black workers and youth are faced with sharply rising levels of poverty and income inequality as well as ongoing mass incarceration. In fact African Americans in the past six years have experienced the biggest loss of wealth since the end of slavery. The fight for a $15 minimum wage which has caught fire around the US is a brilliant way to begin to build the broader working class fightback which is essential to a successful fight against all forms of oppression.

We must tear down the edifice of capitalism and racial oppression with our own energy and ingenuity to reaffirm our humanity in the face of state-sponsored violence and callous indifference by the ruling elite. None of us can breathe in a system of economic, political and social terrorism; the only medicine that can cure our ills is a system change. The struggle for democratic socialism and workers democracy must be placed on agenda.

Kshama Sawant: My Speech while Voting ‘NO’ on the Seattle Police Officers Guild Contract

ABOUT US
Socialist Alternative is a national organization fighting in our workplaces, communities, and campuses against the exploitation and injustices people face every day. We are community activists fighting against budget cuts in public services; we are activists campaigning for a $15 an hour minimum wage and fighting, democratic unions; we are people of all colors speaking out against racism and attacks on immigrants, students organizing against tuition hikes and war, women and men fighting sexism and homophobia.
Contact us: info@socialistalternative.org
FOLLOW US
© Socialist Alternative 2019 | All rights reserved
26 Shares
Tweet
Share26