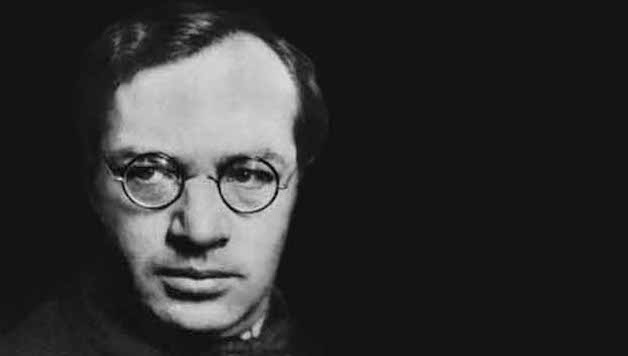 Boris Pilnyak, an outstanding USSR writer, was born as Boris Andreevich Vogau 120 years ago in October 1894.

Like his contemporary Isaac Babel, Pilnyak also found his voice at the intersection of Russian and minority culture and community, only in his case it was that of the Volga Germans, a setting later captured in his story “The Three Brothers” in which he states “Within me are mingled four different bloods: German, Russian, Tartar and Jewish”. Many of his stories show a deep awareness of the forests and steppes of provincial Russia and the peasants who inhabited them.

In ‘A Year of their Life’ (1916), Pilnyak showed a couple building their life together, almost as part of nature, from the ancient peasant courtship songs and dances held on a cliff above the river Volga, through pregnancy to birth, in a tour de force of nature writing. In the absence of the revolution that is what he might have been – a lyrical and observant chronicler of nature and rural life.

Pilnyak lived through the revolution in central Russia with its uprisings, land seizures, starvation, disease, occupation and re-occupation by different armies, and the eventual victory of the Bolsheviks. These experiences informed his longest book, ‘The Naked Year’ (1920), which attempted to portray the year 1919 in a Russian provincial town.

It was the book which established his reputation with its stylistic innovations, use of language and sometimes brutal honesty. But as Trotsky pointed out, it could also be seen as excessively ornamental and annoying. It is a strange and modernistic book, years ahead of its time, which captures the chaos of 1919 by refusing to stick to one plot, preferring instead to show flashes and episodes of the characters and events caught up in the revolution.

In ‘Mother Earth’ (1924), set in the timeless background of the Russian forests, Pilnyak again returned to the civil war, showing the heroism that got the urban centres of Russia through the war: ‘From Saratov, from Samara, from steppe towns, came bands of people with saws, people with the will to achieve victory and not to die – factory workers, professors, students, women teachers, mothers, doctors … fighting for life with blunt saws’.

But he also noted the combination of modernity and primitivism as the peasants are ‘… building their houses according to the village sorcerer’s rules at a time when the world revolution is taking place!’

But by 1925 the revolution was beginning to lose its way and behind the scenes Stalin set about drawing all power to himself, creating his fearful and regimented distortion of socialism.

Pilnyak responded with his most surreal story ‘The Bridegroom Cometh’, which mixes a tale of a British officer’s staid and blinkered posting to colonial Nigeria ( – ‘A year of life in Nigeria had taught Mr Samuel Garnett nothing. He still continued to believe that there was no such place as abroad; that only England existed…’), with a parallel story of life in the ant colony in Mr Garnett’s house, militarised and stifling, with each individual subsumed to the colony, and only a few ‘nymphs’ allowed to fly and see life outside the closely controlled nest.

The story resolves with the ants eating the British officer’s furniture and money, and even his wife’s diary.

If this story was an allegory for emerging Stalinism, his next could not be seen as anything other than an attack on the ‘great man’ himself. ‘The Tale of the Unextinguished Moon’ was a thinly disguised account of Stalin’s murder of the civil war hero, Marshal Frunze, by forcing him to undergo a deliberately botched operation.

‘Number One, the unbending man’ who orders the hero, Gavrilov, to have an operation he doesn’t need was clearly Stalin, and in fact it is thought that Radek, a member of the Bolshevik Central Committee was the source of the details of Number One’s office with its three telephones, his working habits, and maybe the murder plot as well.

The publication of ‘The Tale of the Unextinguished Moon’ unleashed a storm of abuse onto Pilnyak who immediately crumbled, offering an unconvincing denial of any basis in real events for his tale, and writing: “I had no idea that I was writing malicious slander”.

Perhaps to escape the atmosphere in Moscow, Pilnyak secured a commission to travel to the Far East, recording his impressions of China and Japan. His voyage resulted in two travelogues, ‘Chinese Story’ and ‘Roots of the Japanese Sun’. ‘Chinese Story’ (1927) is a superb piece of work, spanning genres of travelogue, novel and journalism. His style found its mark in dreamy descriptions of exoticism and the horror of warlord China, typified by the repeated motif of the smell of the corpses on a funeral barge in the canal outside his hotel window.

‘Roots of the Japanese Sun’ was criticised by Pravda for pandering to Japanese imperialism, although Pilnyak could point to his sources in Soviet publications.

Pilnyak’s final work of real merit, ‘Mahogany’, is a bleak look at the stagnation and despair of the early Stalinist USSR. The only honest people are the ‘holy fools’ who reject the ‘soulless present’ and still believe in the future, but they are utterly marginalised. A Trotskyist returns to his native town only to find it decaying and lost; meanwhile conniving conmen make a living buying and selling the mahogany furniture of the pre-revolutionary era.

In his book ‘Revolution Betrayed’ Trotsky wrote: “The life of Soviet art is a kind of martyrology. After the editorial orders in Pravda against ‘formalism’, there began an epidemic of humiliating recantations by writers, artists, stage directors and even opera singers”.

And Pilnyak did indeed live through a kind of martyrdom after the publication of ‘Mahogany’ as instead of retreating into silence like Isaac Babel he moved over to writing to order. It would seem that only at this late stage did he realise the stakes involved, Stalin’s personal vindictiveness, and the depths to which the regime would stoop to control every element of life in the USSR – including literature and authors.

He tried to make amends by rewriting some of ‘Mahogany’ into a ‘socialist realist’ book depicting the construction of a dam on the Volga called ‘The Volga Falls to the Caspian Sea’ (1930) and even rewriting his Japanese book as ‘Stones and Roots’ (1932) where he quoted sections of his own work of 1927, only to criticise and decry it, for example: “The writer Pilnyak of 1932 informs his readers that his Roots of the Japanese Sun are worthless”. Also he wrote a unflattering account of the USA as ‘O-Key: An American Romance’. But it was not enough.

Stalin was not someone to forget an insult and Pilnyak found himself arrested and charged as a Japanese spy and Trotskyist in 1937 as part of the purges. On 21st April 1938 after a 15 minute trial, at which he pleaded ‘I want to live, I want to work’, he was shot. The file has a small note saying “sentence carried out” and that his manuscripts were “not preserved”.

Pilnyak was sufficiently high profile for his work to be analysed by Trotsky, who declared in 1923 that he was ‘a realist, an excellent observer with a good ear and a fresh eye’. But he pointed out that Pilnyak, in his refusal to clearly understand the revolution, opened the door to retrograde influences, elevating Russia’s peasant past and not its eventual socialist future, and in so doing opening up a risk of deficiencies in the style and quality of his work.

But Trotsky had no truck with the Stalinist idea of compelling creative artists to follow political decrees, and finished his review by recognising Pilnyak’s abilities and difficulty and wishing him success.

Although Pilnyak himself was liquidated by Stalin, his work could not be, and the stories so far translated into English: ‘Mahogany and Other Stories’, ‘Mother Earth’ , ‘Chinese Story’ and ‘Naked Year’, give a unique and rewarding view of the years of revolution and Stalinist counter-revolution in Russia.