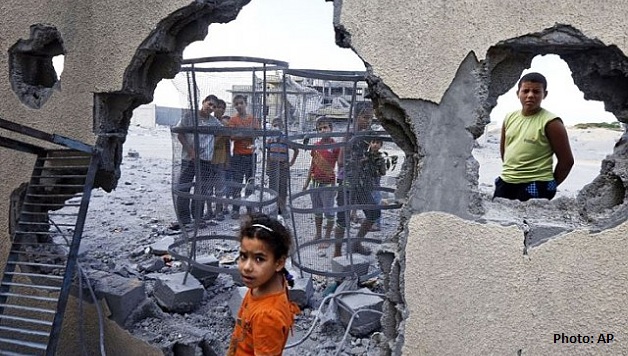 Mass action needed to end the slaughter and blockade!

The trapped, blockaded 1.8 million people in the Gaza strip have been viciously bombarded from air, sea and land. The ferocity of the war on this densely populated coastal enclave of land has once again shocked and outraged people worldwide.

By 14 July, the Israeli forces had carried out 1,474 attacks on targets in Gaza, dropping 1,500 tons of explosives, in the space of a week. The damage inflicted is horrific, with the death toll of Gazans at over 180, more than 75% of them civilians according to the UN, at least 32 of them children. Well over 1,100 have been injured and untold thousands traumatised. Extended families eating Ramadan meals after sunset have suffered unimaginable atrocities and many people are homeless having had their properties blown up. In one strike, 17 members of a family died. Even a care home for severely disabled people was hit.

The Israeli government declared its bombardment of Gaza to be ‘defensive’, but not only is the balance of military forces massively disproportionate, it and its predecessors have for decades subjected the Palestinian Authority (PA) areas to brutal repression and effective occupation. Even in periods of ‘ceasefire’ Israeli army incursions into the PA areas haven’t stopped, with regular assassinations and many detentions – over 5,000 Palestinians are held in Israeli jails. This has been accompanied by determinedly developing Jewish settlements in East Jerusalem and across the West Bank.

On Tuesday 15 July there were discussions aimed at a ceasefire but these quickly broke down. They may resume in the coming days, but if no ceasefire does takes hold then the death and destruction could become even worse, with ground assaults possible.

Either way, nothing in this national conflict will be solved and the terrible cycles of bloodshed will continue for as long as the capitalist elites and politicians on both sides of the national divide remain in power. An alternative scenario can only be put forward through workers and the poor in the Palestinian territories and the working class in Israel building their own political organisations that can act in the interests of ordinary people: against occupation, national oppression, terror, war and poverty.

When an Israeli government committee discussed a ceasefire on 15 July, right-wing ministers Naftali Bennett and Avigdor Lieberman strongly opposed it, wanting instead to escalate the onslaught to a ground assault that would inflict even greater destruction on Hamas and the Gazan population.

Prime Minister Netanyahu has been part of the majority of ministers who have been wary of this, due to the inevitability of Israeli soldiers suffering casualties and the unlikelihood of it completely stopping the rocket fire from Gaza, even temporarily. There have also been a number of other reasons behind their calculations, including the difficulties of withdrawing quickly once a ground attack has begun and some concern about inflicting massive devastation – the Israeli ruling class fears having to take direct responsibility for the welfare of the 1.8 million Gazans.

In addition, the turmoil and civil wars in the region and the international pressure to de-escalate, despite Netanyahu’s denials, have inevitably been factors weighed up. A greater Palestinian death toll would increase that pressure.

Furthermore, escalation can only double and treble the already high hostility across the Palestinian territories towards the Israeli regime. It would also add to the anger and discontent within the Arab population in Israel itself, who in many areas erupted in protest last month following the barbaric killing of a Palestinian youth by far-right Jewish nationalists. That in turn came after the tragic murder of three Israeli teenagers near Hebron, to which the Israeli military responded by inflicting collective punishment across the Palestinian territories.

In the week following 7 July, warning sirens sounded in many Israeli towns and cities, including in Tel Aviv. The rockets fired from Gaza reached their longest range yet, as far as 170 kilometres into Israel. Israel’s Iron Dome anti-missile system intercepted a large number of them, and many others landed outside built-up areas.

The bouts of rocket fire from Gaza – much increased during the recent events – reflect the desperation of Palestinians in the strip, but are no deterrent to the Israeli regime with its overwhelming superiority of firepower. Moreover, rocket and other attacks on Israeli civilians, carried out by groups that are not under democratic control, are counter-productive because they are met by stepped-up repression from the Israeli military. Also their indiscriminate nature spreads fear across Israeli communities with the result that Israeli workers are pushed towards the camp of their right-wing government, for instance, not helping to erode the majority support in Israel there has been for the bombardment of Gaza in its initial days. (That support would most likely lessen in the event of a ground invasion, not least because loss of life of Israeli soldiers would be virtually inevitable.)

Hamas had tried to stick to the ceasefire agreement that followed the 2012 war on Gaza, until these latest events unfolded and its leaders saw it as against their interests to hold back their militias. They have faced increasing difficulties following the loss of their exile headquarters in Syria and the loss of support they received from Egypt’s short-lived Muslim Brotherhood regime prior to its removal from power last year. This, combined with the Israeli blockade on Gaza, the destruction and Egyptian closure of smuggling tunnels through to Egypt and the regular assassinations of Hamas leaders, has weakened Hamas – factors contributing to it needing the recent ‘unity’ agreement with the West Bank PA leaders in Fatah.

On the other hand, Hamas could possibly emerge strengthened to some degree from the war, regarding support among the Palestinian masses, as a result of its harder line than Fatah against the bombardment and the western powers that justify it.

However, neither the right-wing Islamist leaders of Hamas, nor those of secular Fatah, all pro-capitalist, will advance the interests of the Palestinian masses.

Fatah PA president Mahmood Abbas looks to the western powers to intervene; he has again been appealing to the UN to condemn Israel’s actions, while western leaders like Obama, Hollande and Cameron – key players in the UN – have been expressing solidarity with the Israeli government. The US gives $3.15 billion a year to Israel, a state that has become an important base of support for western imperialism in an extremely volatile region. Around three-quarters of that funding are used to buy US military equipment.

The Palestinians can’t rely on their present leaders or the totally hypocritical imperialist powers to help their struggle. Neither can they look to the reactionary Arab regimes, which propagandise in favour of the Palestinians but have no interest in doing more. Left to the capitalist politicians on both sides of the national divide the cycles of bloodshed will go on, just as “Operation Protective Edge” has followed the savage “Operation Pillar of Defence” in 2012 and “Cast Lead” in 2008/09.

Time and time again ‘peace’ talks have so far failed, fundamentally because it isn’t in the interests of the Israeli ruling class for there to be a viable, independent Palestinian state next to Israel, with a historic claim on its land, unpredictable political forces in its leadership and some degree of competition for natural resources, trade and inward investment. The only way of realising a genuine Palestinian state, along with peace and security, is not from deals at the top, but from mass actions at grassroots level.

The Palestinians can only rely on building their own democratically-run grassroots organisations, to organise defence against repression – with the right to arms – and mass actions to further their interests. In early 2008 a mass offensive by Gazans broke the Israeli siege, forcing open the Rafah crossing point into Egypt for a period of eleven days. Mass action could be carried out against many other targets, including land seizures and the separation wall.

The Washington Institute for Near East Policy, reported poll results on 13 July that found that a large majority of Palestinians favour the tactic of “popular resistance” – such as demonstrations and strikes – over violence, to achieve their goals.

It also indicated increased support for a ‘one state’ solution, rather than two, which is ominous for the Israeli ruling class. It can’t contemplate Israeli Jews becoming a minority in the state the creation of which was justified as a safe-haven for Jews following the Holocaust.

But that same ruling class can offer no solutions to end the national conflict, resorting only to cycles of death and destruction which solve nothing. Just as the Palestinians need to build independent working class led organisations, the Israeli working class needs to do likewise. Israeli workers too suffer from the constant insecurity and have many attacks on their pay, conditions and welfare at the hands of their bosses and government.

Socialist Struggle Movement, the CWI in Israel-Palestine is involved in supporting the regular workers’ strikes and struggles in Israel and the PA, as well as participating in the joint demonstrations of Arabs and Jews that take place against the occupation. It argues for socialist ideas, and the building of new mass workers’ parties and movements that can challenge and remove the capitalist parties. A socialist Palestine and a socialist Israel as part of a socialist confederation of the Middle East would be able to end the outbreaks of bloodshed once and for all.