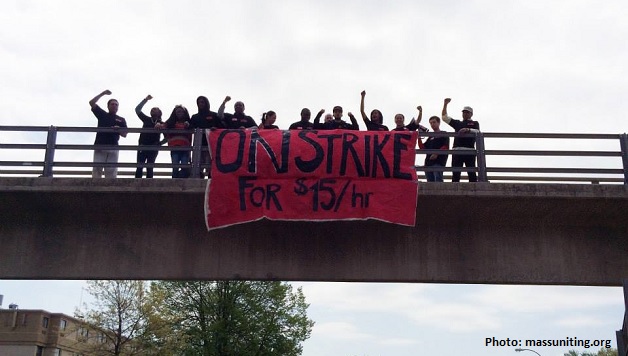 On Thursday, June 19th, the Democratic majority Massachusetts Legislature passed a bill that will see the Bay State raise its minimum wage to $11/hr by 2017. Signed into law by Governor Deval Patrick on June 26th, this means Massachusetts will be in the lead with the highest statewide minimum wage in the United States.

The Massachusetts bill has been lauded by President Obama, who is nationally advocating for a $10.10 minimum wage, stating that “Under the leadership of Governor Patrick, Massachusetts joins a growing coalition of states, cities and counties that are doing (their) part to make sure no American working full-time has to support a family in poverty.”

However, the bill has severe weaknesses imparted on it by the overwhelmingly Democratic politicians. $11 an hour is not a living wage in Massachusetts, especially in cities like Boston, where a living wage for a single adult with a child is between $25 and $26 dollars an hour (MIT Living Wage Calculator). In addition, the $11/hr minimum wage will not be indexed to inflation, and it continues a sub-minimum wage for tipped employees, or a “tip penalty,” that will be slightly raised from $2.63 to $3.75 an hour. The bill also includes attacks on unemployment insurance, such as a three-year rate freeze and raising the base wage needed for workers to qualify.

Raise Up Massachusetts (RUM), a statewide coalition of unions and community groups, is one of the groups that elicited pressure to get the $11/hr minimum wage bill passed. For the last several months, RUM has been gathering signatures for a statewide ballot initiative for a $10.50 minimum wage, indexed to inflation. The $11/hr bill was introduced largely to rival the campaign’s ballot initiative. RUM has since announced its intention to drop its ballot initiative in favor of the state government’s proposal.

However, the biggest influence on all of the current minimum wage deals, including in Massachusetts, has been the “Fight for 15” movements that have been taking off around the country. Even in Massachusetts, where the groups involved in the Raise Up coalition were pushing for $10.50, the main slogans of the actions and rallies in and around the labor movement have been the demand for $15/hr.

In practice, this reflects the power of $15/hr not just as a demand, but as an organizing tool for broader layers of ordinary working people, as opposed to campaigns for $10 or $11 an hour, which have to rely almost solely on the energy of unions and non-profit staff. And unfortunately, it has meant that RUM has not used its resources to push for $15/hr, in large part due to some of its components’ unwillingness to break with the Democratic Party, who have been the main source for watering down any demands, reflecting the interests of big business in Massachusetts.

The victory for $15/hr in Seattle shows how a powerful movement can be built around and win with bold demands. The 15 Now campaign, which led the fight in Seattle, was an open campaign run by ordinary working people based on democratic decision-making processes. It was in this structure that its strength lay. The campaign built on the fast food workers strikes and last year’s successful referendum for a $15 minimum wage in SeaTac, Washington. The threat of an even more extensive mass campaign in Seattle, leading towards a binding referendum, along with the role of newly elected Socialist Alternative City Council-member Kshama Sawant, combined to push the fight to an historic victory. The victory for $15 in Seattle has lit fires across the US, everywhere from New York to San Francisco.

Building a Movement for $15 in Massachusetts and Beyond

The 15 Now campaign initiated by Socialist Alternative in Seattle has begun to spread across the country. In Massachusetts, the New England chapters of 15 Now and Socialist Alternative have begun collecting signatures for a non-binding public policy question on $15/hr in Lowell, Worcester and Boston.

This public policy question, though not having an immediate, binding effect, has enabled 15 Now New England to conduct neighborhood meetings and talk to ordinary working people to build support for $15/hr. The public policy question will give people a very concrete way to demonstrate their support in November. The possibilities for such a ballot question are shown in the results for a similar non-binding referendum in Chicago, in which 87% voted in favor of $15/hr. This has contributed to forcing the city administration to hold public forums on the question of the minimum wage.

The crucial component in winning big gains for working people is building mass campaigns to fight for them. The history of the labor, civil rights and other social justice movements in the United States have shown that the corporate elites and their representatives in government will not give us anything without a fight, and, in fact, in order to be successful, these movements have to challenge the corporate establishment itself. This includes breaking from the constraints of the Democratic Party, which is representative of the interests of big business against working people.

Socialists have a critical role to play, not only helping to build fighting movements, but organizing more broadly to take a position independent of not only corporate interests, but of the political parties of the 1%. The victory for $15 in Seattle has shown what is capable of being achieved when even a campaign of modest size is built along these lines. In order to win such gains in the future, even bigger campaigns must and will be built, and it is crucial that socialists play a key role in their development. We cannot rely on the Republicans or Democrats to deliver for us. They give us war when we want peace and $11 an hour when we demand $15. It is only through building our own independent working-class movements that we will be able to deliver big gains for working people in Massachusetts and around the country.