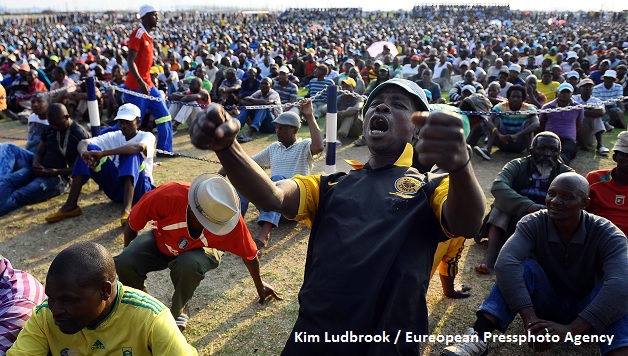 The Workers’ and Socialist Party today hails the resolution of the five-month-long strike in the platinum sector as a victory not only for the mineworkers and their union AMCU, but for all workers and poor people. The increases for the lowest paid workers of R1000 in the first and second year and R950 in the third represent unprecedented gains and a significant step forward in the struggle for a living wage for all.

The settlement which has now been accepted by workers is evidence that determined and united struggle pays. The significant concessions that have been forced out of the mining companies expose as lies their claims of unaffordability.

The determination that has enabled workers to endure five months of hardship is an inspiration to workers and fighting communities and youth across South Africa and beyond. The strike has polarized society along class lines, clarifying who stands on which side of the class battle lines. WASP has throughout this strike made our support of the workers clear. Political parties such as the ANC and the SACP have also left beyond doubt that they side with the bosses. Strike-breaking trade unions such as the NUM, Solidarity and WAU have also imprinted their betrayals in the minds of hundreds of thousands of workers. The deal being signed today is also a victory over the virtual army of detractors that has attempted to demonize not only the striking workers and AMCU, but also anyone daring to actively support their action, for allegedly ruining the SA economy.

This strike, inspired by the martyrs of Marikana has been the most important since the 2012 mineworkers’ strikes. It has posed the fundamental contradictions of the capitalist economic system – the need for the mining industry to be nationalized so that the massive mineral resources can be used both to end poverty wages and to create jobs and develop mining communities and society as a whole. Today’s step forward should serve as a platform from which the labor movement as a whole takes the lead given by AMCU to continue the fight to these ends.

The mineworkers must prepare to fight back the likely attempts by the mining bosses to claw back tomorrow what they conceded today. Retrenchments cannot be accepted – the mineral wealth of this land is enough to provide jobs for many more! The platinum workers’ victory will certainly boost the confidence of workers in the metal and engineering industry and in the public sector, who face looming strike action and tough wage negotiations to mention just a couple of examples. The Workers and Socialist Party will continue to stand firmly on the frontline of these struggles and work to maximize their level of organisation, unity and clarity.