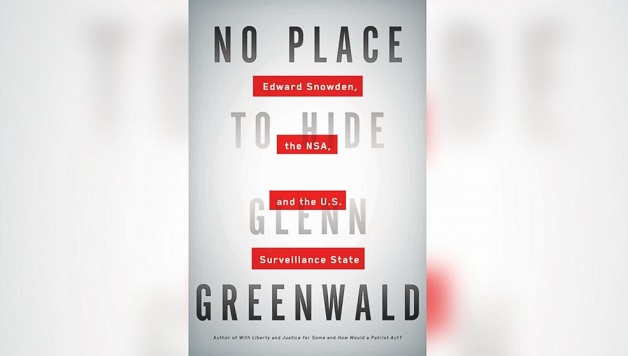 A year ago Glenn Greenwald and Laura Poitras began exposing the shocking extent of foreign and domestic spying carried out by the National Security Administration (NSA). Now, in No Place to Hide, Greenwald goes well beyond the contents of the leaked documents to examine the political landscape that gave rise to the surveillance state.

Spying and surveillance have been happening for decades. But it was Edward Snowden, a former private intelligence contractor, who revealed how the NSA recently began to apply its unofficial motto of “Collect it All” to domestic surveillance. After leaking thousands of documents to Greenwald and Poitras, Snowden fled to Russia for political asylum and continues to face increasing threats of persecution by the US government.

Greenwald writes: “It’s not hard to understand why authorities in the United States and other Western nations have been tempted to construct a ubiquitous system of spying directed at their own citizens. Worsening economic inequality, converted into a full-blown crisis by the financial collapse in 2008, has generated grave internal instability.”

It is the growing resistance to capitalism, the rejection of a system built on inequality, racism and sexism and wracked with economic instability, which has led to the expansion of domestic surveillance. Greenwald writes how, when faced with “strikingly intense levels of discontent with the political class and direction of society,” the political elite have “two options: to placate the population with symbolic concessions or fortify their control to minimize the harm it can do to their interests.”

Recent history is rife with examples of the political elite attempting to fortify their control when political discontent manifests into social movements. In November 2011 there was the coordinated, nation-wide effort to simultaneously crack down on the Occupy Movement. And the Washington State Fusion Center, supported by the Department of Homeland Security and the NSA, is currently involved in a lawsuit for using a government spy named John Towery to infiltrate activist groups such as Port Militarization Resistance and Iraq Veterans Against the War (New York Times, 6/24/13).

Snowden, like millions of other Americans, had hoped that the election of Obama would lead to change. After being elected, Obama vowed to reform the surveillance abuses that had been previously justified by the Bush administration during the War on Terror. Snowden remained silent in 2009 as he waited for the Obama Administration to smooth over some of the roughest edges of the surveillance state and military abuses.

“But then it became clear that Obama was not just continuing, but in many cases expanding these abuses,” Snowden told Greenwald. Snowden watched as Obama prosecuted more whistle-blowers than all prior presidents combined, and specifically targeted investigative reporters from the Associated Press. All this comes from a President who had lauded whistle-blowing in 2008 when he described it as “acts of courage and patriotism… which should be encouraged rather than stifled as they have been during the Bush administration” (The Guardian, 6/7/13).

And just as the Bush administration used the “War on Terror” to justify illegal spying, Obama and top intelligence officials continue to defend the NSA by claiming that counter-terrorism is the main focus. But the leaks by Snowden systematically reveal “economic espionage, diplomatic spying and suspicionless surveillance aimed at entire populations” alongside the specific targeting of activists. Greenwald makes it clear that the primary focus of the NSA is suppressing internal dissent and increasing the power of corporate America across the globe.

Alongside targeting journalists and whistle-blowers, the NSA and its partners systematically attempt to undermine activist organizations and social movements. A leaked document called “The Art of Deception: Training for Online Covert Operations” describes how the targeting of activists is guided by the four D’s: “Deny/Disrupt/Degrade/Deceive.” Tactics used to undermine activists include setting up a ‘honey-trap’ (luring an activist into an illicit romantic affair and then exposing it), hijacking an activist’s social media accounts to send damaging messages to their allies, and identifying and exploiting fracture points in activist organizations.

Despite the elaborate systems of surveillance constructed by the NSA, and the despicable tactics used against activists, social movements continue to rise up and win substantial victories. The Occupy Movement focused the national dialogue on wealth inequality and emboldened a new layer of young activists. The election of Socialist Alternative candidate Kshama Sawant to the Seattle City Council, on a platform of fighting for a $15/hour minimum wage, rent control and taxing the rich, was a historic victory that echoed around the world. And then, just six months later, a $15/hour minimum wage was won in Seattle by socialists, a grassroots movement and organized labor.

Greenwald concludes the book by emphasizing the importance of building social movements: “Even the most committed activists are often tempted to succumb to defeatism. The prevailing institutions seem too powerful to challenge; orthodoxies feel too entrenched to uproot; there are always many parties with a vested interest in maintaining the status quo. But it human beings collectively, not a small number of elites working in secret, who can decide what kind of world we want to live in.”

Greenwald’s newest book, and the revelations he is likely to reveal after its publishing, are key for activists to read. They illustrate that despite the widespread nature of the surveillance state, working people have the potential power and numbers to win victories against the ruling class, their political representatives and their repressive forces.

It is clear that we cannot rely on the Democratic Party, or any party that represents the interests of the ruling elite, to fight for our basic rights. Only by coming together, building social movements and establishing our own political representation can we begin to create the fundamental change that is so desperately needed.

Québec and the October Crisis of 1970