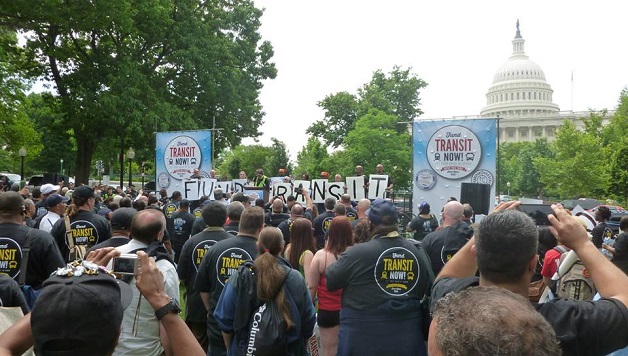 The battle for public transit in the city of Pittsburgh has been an ongoing, uphill struggle for the last decade or more. Under both Democratic and Republican administrations on the city, county, and state level, a group of transit activists called Pittsburghers for Public Transit (PPT) and Amalgamated Transit Union (ATU) Local 85, have been at the forefront of the organizing efforts to stop budget cuts and fight for a public transit system in Allegheny County which serves working people.

Organized around the slogan “Defend and expand public transit,” the coalition of riders and drivers fought against transit cuts in 2008-09 and helped organize a mass day of protest in Harrisburg, the state capitol, on June 4, 2013. This demonstration, which filled the capitol rotunda with transit activists and workers from across the state, played a major role in winning a funding bill for the transit system.

Pittsburghers for Public Transit, including local members of Socialist Alternative and the members of ATU Local 85, are now demanding restoration of services that were cut five years ago. The Port Authority of Allegheny County board promised to restore routes after a funding bill was passed. One of the proposed routes to be restored was the vital line through the working-class Baldwin Borough neighborhood. Since the cuts a few years ago, the residents of this borough have been forced to walk up to four miles to catch the closest bus. It is common to see elderly riders being given rides up the hilly roads from the bus stop when they are simply too exhausted to make the trek back home. Reports indicate that the Port Authority board has come to the incorrect conclusion that there is no real need for the service in Baldwin because the residents of the community either all have cars or simply don’t want the service. Recent experience shows that this couldn’t be further from the truth. On May 10, members of PPT and ATU mobilized on Baldwin Borough, knocking on every door they could, collecting more than 300 surveys. The main aim of the surveys was to assess whether residents wanted and would use bus service in their neighborhood. The response was overwhelmingly positive with nearly all residents reporting that they would either use or support a restored bus line through Baldwin. The other purpose of the survey was to gauge whether neighborhood residents would mobilize for an action demanding the restoration of service. After compiling all the answers from the surveys, PPT will be working over the next few weeks to hold a mass meeting in Baldwin, signing up new members of the organization, and planning further actions for transit equity.

The mass canvassing in Baldwin is a pilot program by members of the ATU and PPT. Further canvassing days and actions are planned for other under-served and un-served communities across the city and county. By building a coalition of transit workers and the public, and by organizing a large visible movement of militant protests, the cuts can be reversed and services restored.

ATU President Calls for Many PPTs

Larry Hanley, the International President of the ATU, has called for the development of coalitions like the one between Pittsburghers for Public Transit and Local 85 across the country. Brother Hanley was wearing a PPT button at the Transit Day rally in Washington, DC on May 21, and PPT organizer Alicia Williamson was the only non-politician and non-union official to speak to ATU and TWU members from the podium.

The class-struggle approach of PPT has galvanized a layer of the rank-and-file trade unionists in Pittsburgh, especially in ATU, which has also grown more vocal and militant, including the endorsement of the growing $15 Now campaign by the International union. The demand for a $15/hour minimum wage is befitting a union that has declared the right to high quality, affordable public transit a civil rights issue – especially with rising fares for public transit across the country.

Socialist Alternative will continue to support Pittsburghers for Public Transit and to campaign for a democratic and militant approach to the struggle to defend public transit in Pittsburgh. United, drivers, mechanics, and the public are capable of not only reversing the cuts of the past but also expanding the transit system in Pittsburgh and providing a model for how working-class people can fight against budget cuts and austerity.

To donate or support this campaign, contact the author Karl Belin at karlrbelin@gmail.com or (412) 589-2558.
Please also “like” the Facebook pages of Pittsburghers for Public Transit and also Pittsburgh Socialist Alternative.