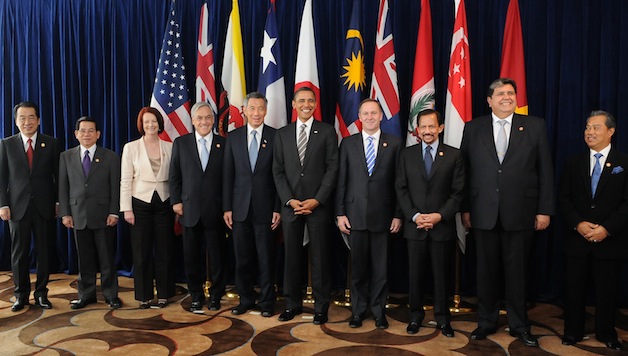 Looking back on the last 20 years, the effects of the NAFTA free trade policies are crystal clear. Despite the promises of politicians in the Democratic and Republican parties that the policies would create jobs in the United States, NAFTA has caused nearly one million U.S. jobs, along with hundreds of thousands of Canadian jobs, to be lost. In Mexico, through cheap government-subsidized corn being pumped into the country by U.S. agribusiness, the national corn industry was absolutely devastated, causing untold misery for the Mexican working masses.

At the same time, largely outside of the media spotlight and behind the backs of the working class, corporate politicians from both parties of U.S. capitalism are pushing forward a new free trade agreement along the lines of NAFTA. President Obama is pushing to fast-track the legislation to prevent opposition ensnaring the bill through endless amendments.

The Trans-Pacific Partnership (TPP) has been compared by activists to “NAFTA on steroids” and is projected to include many measures that would be devastating to the struggles of environmental activists and workers fighting for a $15 minimum wage.

While the TPP talks are largely being conducted in secret, what we have managed to learn about the proposal is terrifying, to say the least. Under this proposed deal, not only would barriers to offshoring of jobs and capital flight be broken down further, as with previous free trade agreements. There would also be a series of new legal changes to the way that corporations interact with governments and to the power of citizens to force their governments to put forward policies which reflect citizens’ interests.

The TPP trade policy, as it is currently being put forward, would give corporations an equal footing with signatory governments through a series of foreign investor services enforced through what is known as the “investor-state system,” raising them far above citizens in terms of their rights under U.S. and international law. Multinational corporations would be given the right to  sue governments under World Bank and UN rules through a three-person tribunal of private sector lawyers. This would enable large corporations to demand compensation from taxpayers for projected profit losses resulting from policies passed by governments.

What this means for activists across the country is that if we were to win crucial battles such as a $15 minimum wage or the prevention of environmentally destructive projects, such as oil pipelines and coal terminals being constructed, the corporations who would lose profits from such policies could use an arbitrary legal process to extract enormous sums of money from ordinary taxpaying citizens as compensation for losses to potential profits.

The TPP should be vigorously opposed by environmentalists, low-wage workers, and union activists. Without giving an inch of ground on the struggles for a $15 minimum wage and other issues, activists across the country should be prepared to draw attention to this vicious attack on our living standards and basic democratic rights, to build the groundwork for an international fight-back against the TPP both in the U.S. and in the other signatory countries. Wherever possible, we should immediately build links with the union movement and other movements in the signatory countries to make a united struggle against the TPP.

Big business and its servants in the two-party system are deathly afraid of a mass fight-back on this, given the huge struggles which broke out against NAFTA and the FTAA all over the world in the 1990s. Socialists and activists should use the issue of the TPP to expose the true allegiances of the Democratic Party and to make a strong case for the labor movement to break from the Democratic Party and build an independent political party that will struggle against neoliberal policies like the TPP and fight for the interests of the working class and the environment.