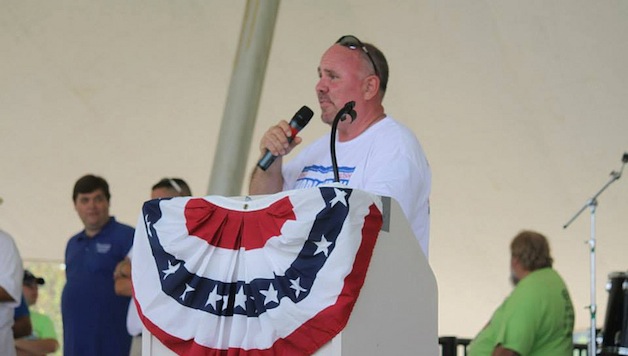 “We asked voters: ‘Are you tired of the Democratic Party walking all over us? Are you tired of all the things we’ve won getting eroded or shot down?’ This message sold well to union households.” -Joe Thayer

When it comes to local government, most Americans are ruled by a one-party system. Lorain County, Ohio, is no exception. In this industrial, union-dense county, the Democratic Party has enjoyed a political monopoly for decades. Like elsewhere, business interests have always dominated the Lorain County Democrats, but in the past a strong economy meant local government and businesses could afford to buy labor peace through concessions to strong local unions.

This approach of basing negotiations on the idea of reaching a compromise with management, rather consistently fighting for the needs of workers, has been long strained by capitalist globalization and neoliberal policies at a national level and now completely undermined by the economic crisis. The Democratic Party has moved to more openly embrace anti-worker, pro-corporate policies, sharpening tensions with unions who traditionally backed them. This story isn’t unique to Lorain; virtually every Democratic Party city and town in the country has suffered the same process. What is unique about Lorain Country is that unions had the audacity to stand up and fight back in the electoral arena, building a labor-based political alternative.

Last fall, most unions in the area joined together to run two dozen candidates for local offices in several cities and towns across Lorain County, winning all but two seats. Some were incumbents also backed by the Democratic Party, but several high-profile contests featured union members winning against brazenly pro-business Democrats.

Union teacher Josh Thornsberry defeated incumbent City Councilor Frank DeTillo, president of the Lorain County Chamber of Commerce. “We intend to stand with you and with all of Lorain County’s working people,” said Thornsberry shortly after his victory. “This is just a first step, but we will be taking many together in the future.”

The unions have not formally created a new party, but as Harry Williamson explained, “We got T-shirts made up saying ‘Lorain County Independent Labor Party.’ That idea is gaining momentum.”

On January 8, Ty Moore of Socialist Alternative spoke with the three union leaders at the center of laborís electoral challenge to the Democratic Party in Lorain County, OH, last fall. Joe Thayer is marketing director for the Sheet Metal Workers and former president of the Lorain County Central Labor Council. Harry Williamson is current president of the AFL-CIO in Lorain County. Jim Slone is chair of the United Auto Workers CAP Council.

Thayer: Labor’s relationship [with the Democrats] was strained for years because there was a concerted effort by the leadership of the Democratic Party to run Chase Ritenauer for mayor of Lorain against Tony Krasienko, a brother of labor with the sheet metal workers [who was mayor from 2007-2011]. The old guard of the Party didn’t like that, so they ran a campaign and set Tony up to fail, and they beat our guy out in the primary in 2011. …Tony would try to bring legislation up in the city to bring working people’s issues forward. The council was 100% Democrat, so you would think life would be easy and we could make some progress. But the council would road-block on votes, not letting him do anything. Chase Ritenauer was backed by the Association of Building Contractors. When you get a Democratic mayor taking money from our number one enemy, you can’t just take that lying down.

Williamson: The repeal of the Project Labor Agreement, pushed by Ritenauer, was icing on the cake. [The PLA ensured all city contracts employed unionized workers, with 75% hired locally with at least 9% workers of color]. We give and give. We do a lot of fundraisers and campaigning work for the Democratic Party. But we got tired of being used.

Slone: We’re tired of being taken advantage of by the Democratic Party. This is the first shot. They really weren’t expecting all the unions to come together. They didn’t count on that. This is the closest our unions have worked together in the history of Lorain County. We are in closer communication than ever. We talk over issues together. We were meeting so much together that our wives thought we were cheating on them!

Williamson: The Democrats’ county chairman told us, “There is no way in hell your independents are going to beat Democratic incumbents.” We vetted independent candidates that supported our issues and believed in our same ethics. Many of them are union members themselves.

Thayer: We had tailored lit pieces to different voters and sent out multiple lit pieces. It came down to old-school ground-and-pound campaigning, hitting the doors and the phones. We had a great volunteer base and got our folks out there. We felt pretty confident because we took away the workhorse of the Democratic Party by going on our own. We were always the workhorse for the Democrats. They don’t like to campaign on their own. We asked voters, “Are you tired of the Democratic Party walking all over us? Are you tired of all the things we’ve won getting eroded or shot down?” This message sold well to union households.

“Anyone looking at us from around the country, our message is to not give up. Stay together and fight together!”