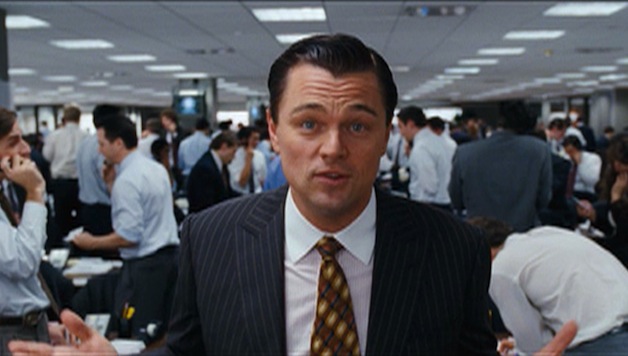 “Fuck the clients. … Move the money from your client’s pocket into your pocket. … Nobody knows if a stock is gonna go up, down, sideways, or in fucking circles, least of all stockbrokers. It’s all a fugazi. … We don’t create shit. We don’t build anything. So if this client wants to cash in, liquidate, and take their money home, what do you do? You get another brilliant idea, another situation, another stock, to reinvest his earnings and then some, and he will every single time cause they’re fucking addicted. Meanwhile he thinks he is getting shit rich, which he is on paper, and you and me, the brokers, are taking home cold hard cash via commission, muthafucka.”

Newbie stockbroker Jordan Belfort, played by Leonardo DiCaprio, gets this advice on his first day at a Blue Chip brokerage firm from his coke-snorting boss Mark Hanna, played by Matthew McConnaughey. After he loses his job in the Wall Street Crash of 1987, Belfort reinvents himself as a broker of penny stocks from companies that don’t even have enough capital to be listed on the New York Stock Exchange. These stocks sell for less than a dollar a share, but the commission is 50% as opposed to 1% on Blue Chip stocks. These stocks are worthless, but when Belfort cold calls working-class people with a high-octane rap about getting in on the ground floor and making a million, they lap it up. Belfort says, “I was selling garbage to garbage men and making cash hand over fist.”

What the film doesn’t show is that, not only Belfort but the entire society was angling to get the least informed and the poorest to buy into the stock market. And this is The Wolf of Wall Street‘s fatal flaw. Scorsese bludgeons the audience with the spectacle of the coke, the call girls, and the all-around degenerate hijinks of Belfort’s merry band of boors pushing penny stocks, yet he forgets to place any of it in a proper context. By the late ’80s, you couldn’t buy a slice of pizza in Manhattan without stock prices being shown on a monitor attached to the cash register. And this was after the Black Monday crash of ’87.

On Black Monday,1987, in the largest plummet of the stock market since the crash of ’29, the Dow Jones average dropped by 22%. Capitalism needed capital, so the print media, TV – everything – was skewed toward getting the working class to sink their small savings into the stock market, to get in on this deal. Lifestyles of the Rich and Famous blinks across Belfort’s TV screen in the background, but it doesn’t even begin to tell the story. This was not the background; this was in the forefront of popular culture.

The endless iterations of Belfort’s sordid conduct for the film’s 2 hours and 45 minutes offer an exhausting and pointless audience experience. It’s revealing that Jonah Hill has a key role as Belfort’s right hand man, Danny Azoff. Hill, who rose to stardom in Judd Apatow’s comedies about wayward adolescence, seems to set the tone for the film even more than Leonardo DiCaprio’s Jordan Belfort. There is an unrelenting “Animal House” vibe to the film that skews it in a wrongheaded direction. Earlier films like The Boiler Room and Glengarry Glen Ross did a much better job of revealing the inner workings of the men who push the “pump and dump” stock schemes.

It’s hard to understand what Scorsese thought he was doing. Was he under pressure from studio execs to connect with a younger generation of ticket buyers, or did he just misjudge the kind of story he needed to tell?  What we do know is that he was once a brilliant filmmaker who created worlds around the people who lived on the blue-collar margins of criminality. The streets – and the flawed human characters who inhabited them – were Scorsese’s terrain, with a particularity and eye for detail equal to the films of Buñuel or Godard concerning the European bourgeoisie.  We might laugh at Jake LaMotta in Raging Bull; we might even think he is boorish and vulgar, but he is at all times a man – someone we recognize as human.

Some of the old master’s hallmarks appear in The Wolf of Wall Street – the semi-improvisational feel of extended scenes which riff on the quirks of comedic speech as well as excellent naturalistic performances – but the script rarely rises above the level of caricature. Scorsese is a 70-year-old man who has lived in Hollywood surrounded with industry people for a couple of decades. While it is possible to continue making great works of art into old age, artists must protect their curiosity and thirst to tell the stories of real men and women in whatever echelon of society they dwell. Scorsese can’t do this anymore.

Great art doesn’t have to be anti-capitalist, but you’d have to be living in a cave not to know that in the intervening years since the days of Belfort’s scams, the entire world economy was tipped overboard by the government deregulation of even riskier financial behavior. Belfort must be smirking today when he thinks that far bigger swindles by major brokerage houses and banks have led to few arrests and no convictions. After all, capitalist politicians have spent the years since Belfort’s 1980s heyday rewriting the laws making unscrupulous speculation mostly “legal.” Belfort repeatedly tells the audience, “You don’t want to know the boring details.” But Scorsese is dead wrong. The whole world wants to know the details, and this is why The Wolf of Wall Street has mostly been dismissed by serious critics. In today’s Wall-Street-scarred world, this film is irrelevant.