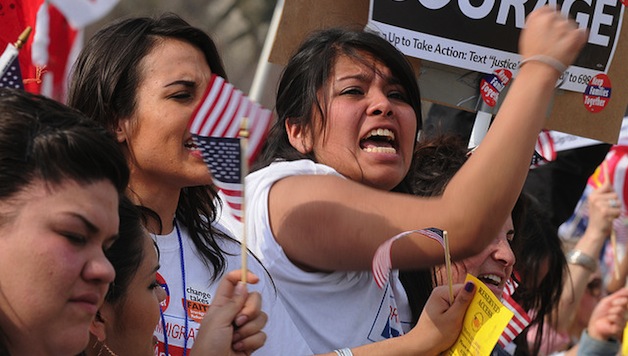 Women in the U.S. are not strangers to economic exploitation, gender discrimination, or violence. This is especially true for immigrant women in the U.S. Undocumented immigrant women are subjected to both gender discrimination and prejudice based on their ethnicity or country of birth. Undocumented women regularly work under sweatshop conditions. Living on poverty wages or risking life and limb working to feed their families is the tip of the iceberg.

In October, 2013, ColorLines published a report indicating that immigrant women represent over half of undocumented immigrants in the U.S., and they are the most vulnerable to any bill or congressional decision. “51 percent of immigrants in the U.S. are women, and three-fourths are women and children,” Jayapal told ColorLines, and yet “the debate on immigration for so long has not been defined as a problem for women and children. We’re used to seeing a bunch of pictures of immigrants in which men climb the border wall, which is just a small percentage of all the ways people get here,” (10/14/2013).

Women in this situation are under constant threat and fear of deportation. Without documents or citizenship, they are concentrated in the service sector or in child care. Most are paid under the table, and with inconsistent work histories they cannot even attempt to move up in employment. These factors need to be considered in legislation dealing with proof of residency.

Currently there are no laws protecting undocumented women from sexual, physical, or mental abuse in the U.S. According to the women’s rights organization Breakthrough, immigrant women are three to six times more likely to suffer domestic violence than native-born women. Between 34 and 49 percent of women who are not citizens suffer domestic and gender violence, a risk that rises to 60 percent in those who are married and up to 77 percent for women who depend on their spouses to maintain legal status.

It is hard to get clear statistics on these issues. Violence against undocumented women often goes unreported because of the fear of deportation. Women often end up in detention centers because they were victims of abuse. In the North Georgia Detention Center, more than half of women interviewed for a study conducted by Azadeh Shahshahani were victims of domestic violence.

Detention centers are one of the most disgusting forms of inhumane treatment. In a 2008 case, Juana Villegas, who was nine months pregnant at the time, was arrested during a traffic stop. Authorities found she was here illegally and held her with no due process. While giving birth she was shackled to her hospital bed. Shortly after Ms. Villegas gave birth, she was separated from her infant, returned to jail, and not allowed to breast pump as needed, causing an infection, (NY Times, 10/17/13). This is only one example of the type of horrific treatment women suffer in these prisons.

Shut Out of Immigration Reform

There is a widespread myth that the new immigration reform bill would solve fundamental problems for all undocumented immigrants. This bill includes multiple layers of rules restricting and obstructing any easy path to citizenship. But women would be particularly hit hard since the bill denies them access to health services for up to 15 years. Immigrant women would have to work for a minimum of 10 years after gaining citizenship before they could receive benefits such as Medicaid.

Even with the Affordable Care Act as it stands now, tax credits and subsidies that are supposed to encourage participation in health insurance marketplaces would be denied to immigrants. This would create huge financial and health hardships for women who may need care like mammograms and routine pap tests.

The Obama administration has a deplorable record on justice for immigrants. Since Obama was elected in 2008, more than two million immigrants have been deported. That’s more than under any other president in U.S. history. In the time since the Senate passed the immigration bill, the Department of Homeland Security has deported a further 100,000 people (New York Daily News, 10/5/2013).

Latinos were among the biggest supporters of a second term for Obama’s reelection-based on the promise that immigration reform was a top priority. What has that support done for undocumented women and other immigrants?

Build a Movement in the Streets

We need continued protests out on the streets. Native-born and immigrant workers must to break with both the Democrats and the Republicans. We need women’s rights activists and organizations to link together with the demand of full legal rights for all immigrants. At a time of capitalist crisis, when all workers are under attack, the struggle for immigrant rights needs to be linked to building a powerful movement to win decent living standards for all workers.