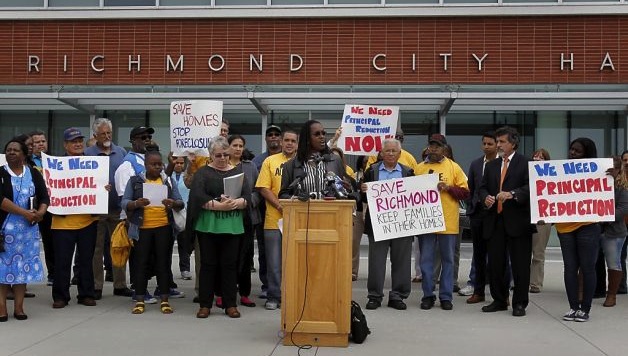 Cities and municipalities across California and the country are fighting back against foreclosures by using the legal practice of eminent domain to seize mortgages from big banks and refinance homes at current market value. Typically, the practice of eminent domain is used by the state to seize personal property and homes to make way for projects that benefit big business interests like developers. In Richmond, CA, the people have decided to instead use this practice to benefit ordinary working people whose homes are being stolen by Wall Street.

The town is buying underwater mortgages – ones that are worth more than the house is worth for their actual market value – and working out reasonable repayment plans for homeowners. Instead of Wall Street, the homeowners pay the city of Richmond. The city buys them for 80% of market value, with the 20% difference going to the city and to a private investment firm. While the profiting of a private investment firm through this practice makes the deal bittersweet, the forces of capitalism have overwhelmingly allied on the other side.

Predictably, the banks have begun a counteroffensive, which includes filing lawsuits against the city of Richmond and threatening to redline entire cities if they initiate this practice. Redlining is a practice banks use to discriminate against non-white communities in lending. Now, the banks plan to use this practice on entire cities, effectively cutting them off from all private lines of credit if they follow through with their plan to seize mortgages. The severity of reactions by the banks demonstrates how great a threat they perceive eminent domain to be. In doing this, the bankers have asked local politicians to make a choice between their constituents and the banks.

While some cities have backed down under pressure, for others like Richmond, the pressure from the banks has been outweighed by pressure from below. Left-wing Greens have been elected to many offices in Richmond, and they are supporting the fight against the banks. This shows how social movements and independent working-class electoral initiatives can support each other to wage effective struggles. With more pressure from the working class, other cities could follow the route of Richmond and defend their citizens against the banks. To take this to the next level, all the assets of the major financial institutions should be taken under public ownership, with small investors to be paid back on the basis of proven need and workers in big banks to be retrained with union rights and wages. This policy could help provide guaranteed, quality housing for all through forgiving the debts of ordinary homeowners.

We Have to Fight for a Workers Recovery