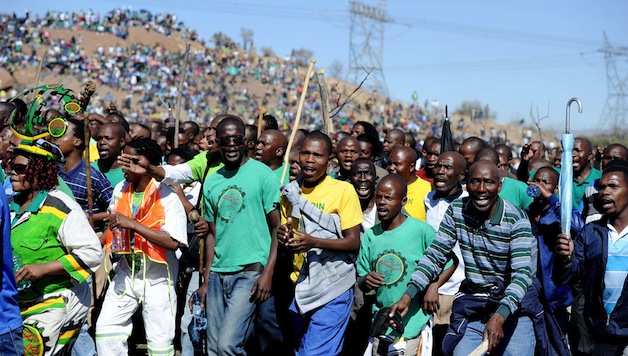 On August 16, the anniversary of the police massacre of striking workers at the Lonmin platinum mine in Marikana, over 5000 mineworkers gathered on ‘the mountain’ where their comrades had been shot down one year earlier.

The Marikana massacre was the most significant political event of the post-Apartheid period.

“The hardest thing is that I don’t know why I survived… when nothing has changed”, said one of the survivors who was one in the group that was mowed down in front of TV cameras. He was shot with 14 bullets and lay in a coma for two months.

Family members of the murdered workers spoke of their loss and pain. The Lonmin workers’ strike leaders spoke of the struggle they still face as the company tries to take back the unprecedented wage increases it conceded a month after the massacre. Though Friday was a working day, thousands of Lonmin workers chose to sacrifice a day’s wages to pay their respects to their fallen comrades. Workers from throughout the Rustenburg platinum and chrome shafts also made their way to Marikana, as well as workers from Limpopo and Gauteng mines.

Amplats, the world’s largest platinum producer, is imposing a massive cuts programme on the workers who were at the heart of the solidarity strike which followed the massacre and was decisive in turning the Lonmin strike towards a workers’ victory. Also present were workers from the Glencore-Xstrata mine in Tubatse, Limpopo, who were dismissed in May for taking strike action against the racist abuse they suffer in the mine. Fittingly, workers were therefore coming together on the margins of the rally to begin to work out a fight-back strategy against the bosses’ offensive which is now gathering speed.

The organizers of the commemoration rally were the Democratic Left Front-linked Marikana Support Campaign working with a number of conveners prominently associated with the massacre and its aftermath. These include Bishop Jo Seoka, who supported the strike and Advocate Dali Mpofu who represents the workers’ families at the Farlam Commission of Inquiry as well as Joseph Mathunjwa, the president of the workers’ new union AMCU.

Events leading up to the commemoration confirmed that the Marikana massacre was a watershed in post-apartheid SA, the full political effect of which has yet to play itself out. It reaffirmed the enormous gulf that has been opened between the classes and the sharpening of the conflict between them.

The commemoration was held against the background of a war of attrition by the mining bosses against the workers as they continue to exact revenge for the concessions they were forced to make at the height of what amounted to an uprising in the latter half of 2012. In a determined attempt to restore the pre-Marikana balance of forces, the mine bosses are carrying out retrenchments, victimizing independent strike committee leaders, and tearing up agreements signed last year arguing that the independent workers committees had no legal status. The bosses are also exploiting the fears of the Amcu leadership which itself is determined to establish its authority over the mineworkers’ independent strike committees by substituting them with their own structures.

The cynicism of the bosses was reflected in the fact that they accepted an invitation to speak, yet declared that workers attending the event would be subject to the “no work, no pay rule” that is applied during strikes – legal or illegal. Whist the Lonmin bosses were posturing hypocritically by apologizing for the first time for the massacre and undertaking to pay for the education of the children of the victims news reached workers that same day that one shaft would be closed. These production cut back plans will leave up to 7000 workers jobless and the families and children destitute.

Astonishingly, despite the fact that the event was conceived as an all-inclusive ‘apolitical’ commemoration, it was boycotted by the North West ANC (the province Marikana is located in) on the grounds that it had been politicized! In distancing themselves from the event, the North West ANC lined up behind the National Union of Mineworkers (NUM) who rejected the invitation to participate, arguing that they did not recognize the Marikana Support Committee.

The ANC-government, which sent no representative to the commemoration either, has already been rubbing salt in the wounds by refusing to cover the mineworkers’ legal costs at the Farlam Commission, instituted ‘to find the truth’ of the massacre, rendering it a complete farce. Yet there was money for Zuma to defend himself against rape and his continuing battle against corruption charges which could be re-instated.

Unfortunately, the organizers’ apolitical, all inclusive approach acted as a cover for right wing political parties which are in full agreement with the massive retrenchments plans. This allowed the likes of the white dominated liberal Democratic Alliance, which called for the repressive measures that led to a virtual state of emergency in Rustenburg, to cynically use the event to portray themselves as sympathetic to the workers’ cause and prevent the workers from using the event to rally support against retrenchments and for legal cost to be paid at the commission.

The rally started off with an hour of prayers and contributions from religious leaders. Local kings and the Lonmin CEO were among the other speakers to be given a platform. All political parties, except for the Workers and Socialist Party which was formed by the Democratic Socialist Movement (CWI in South Africa) and mineworkers’ strike committees following the strike movement, had been invited to participate. The Workers’ and Socialist Party however managed to push for a platform and Liv Shange eventually got to address the rally as the last speaker, after a long list of right-wing politicians poured crocodile tears, including speakers from the Democratic Alliance and the Zulu-nationalist Inkatha Freedom Party.

Julius Malema, the expelled ANC Youth League president-turned-‘Commander-in-Chief’ of the new Economic Freedom Fighters made a welcome and sharp attack on the Lonmin management and the Zuma-government’s responsibility for the massacre was met with great enthusiasm by the workers. Malema was clearly intended to be the grand finale, but the attempt to again exclude WASP from the speakers’ list did not succeed and Liv Shange got to make the final speech after Malema, and was met with an equally warm welcome.

A year after applauding the massacre, the fall-out from Marikana is expressed in the virtual civil war in Cosatu, which itself failed to organize a commemorative event. Not only were the NUM and all other ANC-aligned structures absent from the commemoration, but, against a wave of sympathy across the country for the plight of the workers and indignation at the refusal to fund the workers legal representatives, the ANC head office was compelled to condemn the ANC North West for their insensitive remarks. The NUM itself has just lost a long battle it fought by means of fraud, intimidation and court action to retain its recognition at Lonmin despite having lost nearly all its members to AMCU, which now has majority organizing rights at Lonmin. A heavy police presence kept at a distance from the mountain.

A year after the massacre, the rally displayed the undiminished fighting spirit of the mineworkers. Despite the rather confusing circumstances of the rally – e.g. the involvement of the Lonmin bosses, and the political parties which despite their sweet talk represent the very ruling class which in effect ordered the Marikana hit – the level of class consciousness which Marikana registered in the minds of not only the Lonmin workers but of working class people across SA was also clear. It is an urgent necessity for mineworkers to once again come together as they did after the massacre, this time to respond to the onslaught which the bosses have engaged in since the strike wave subsided on mining jobs and on the mineworkers’ newly-recovered independent fighting capacity. The battles that lie ahead, centered on the mining industry, will put to the test all those who claim to stand on the side of the workers. The reception the Workers and Socialist Party and the DSM received, including a record-high sale of the DSM paper Izwi labasebenzi and WASP t-shirts, show the confidence that the DSM has established for WASP among the mineworkers. WASP will certainly play a key role in the fight-back that must be driven by the mineworkers reaching out for support from other workers and struggling working class communities.

Nigeria: Kick out the Profiteers — For a Socialist Alternative!