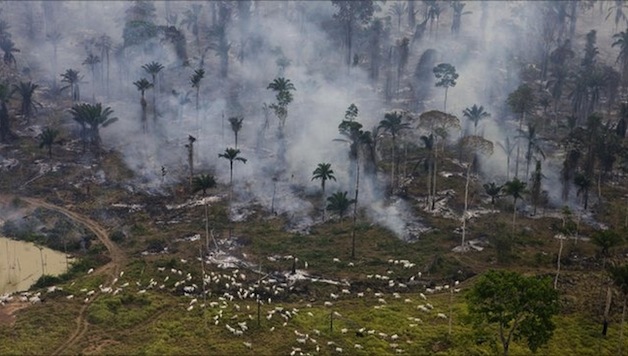 The murder in 2011 of José Cláudio Ribeiro da Silva and Maria do Espírito Santo hit international headlines. Both were environmental activists in the northern Brazilian state of Pará. Their deaths drew comparisons with other prominent campaigners who were killed in the Amazon basin, including Dorothy Stagg in 2005 and Brazilian trade unionist and environmental campaigner Chico Mendes (Francisco Alves Mendes Filho) in 1988.

Da Silva and Santo had been supporting three families occupying primary forest that had been bought by José Rodrigues Moreira with the intention of turning it into cattle pastures. The two hired killers recently received sentences of more than 40 years each. Moreira, standing trial for ordering the killings, was released.

Da Silva had been cited by human rights groups as at risk of assassination since 2008, and predicted his death six months before the event. Despite repeated death threats made to da Silva, no police protection was granted.

In 2011, 32 environmentalists were killed in Brazil, according to the Guardian. In Pará, predominantly comprised of Amazonian forest, 231 were killed between 1996 and 2010, according to Brazilian NGO, the Pastoral Land Commission (CPT). “Violence is the instrument of local capitalism. They [landowners] are proud to kill and they’re seen by some as local heroes for defending their property with blood”, said Brazilian commentator Filipe Milanez.

The Brazilian government has taken no real action to stop the ‘wild west’ agricultural capitalists in Pará. The Guardian reports that many of these, alongside speculators, are moving in to different states, such as Amazonas. According to the CPT, 918 environmentalists have been killed between 1985 and April 2011, but trials were only held in 27 instances. Chico Mendes’s killer had sent him death threats, and another state had an arrest warrant out on him for murder. Mendes informed the police of this. They took no action.

The Amazon ecological system, or biome, covers 6.7 million square kilometres, and plays an immensely important role. It makes up half the planet’s remaining rainforests, and 10% of the world’s known species, many of which are not found elsewhere. There is an estimated population of 2.7 million indigenous people, making up around 350 ethnic groups. The biome is spread over nine countries. However, 60% is in Brazil.

The Amazon basin is a large part of the carbon cycle. From the 1980s to 2004, it absorbed 1.5-2 billion tonnes of carbon dioxide (CO2 – a major greenhouse gas) a year, making it an important carbon sink. In contrast, roughly three quarters of Brazil’s greenhouse gas emissions come from deforestation through burning and rotting. The biome has a key effect on regional and global weather systems and is, in turn, impacted by changes elsewhere.

According to Greenpeace, 15% of the Amazon biome has been destroyed through logging and the clearance of land for agricultural purposes. This has significantly reduced the Amazon’s ability to absorb CO2. In addition, two ‘once-in-a-century’ droughts have hit the region in the last decade alone. The 2005 drought led to the Amazon basin becoming a net emitter of CO2, releasing three billion tonnes through increases in rotting vegetation, according to a Leeds University study. The drought diminished the biome’s ability to absorb CO2 in subsequent years. Further damage to the Amazon biome could push the ecosystem over a tipping point, leading the region to become a permanent source of CO2.

With the effects of broader environmental change on weather patterns, the El Niño current in the Pacific ocean could become a permanent feature, adding to the disappearance of the Amazon biome. The UN climate panel report in 2007 projected that, with temperature rises leading to climate change, the region could see a “gradual replacement of tropical forest by savannah”.

The destruction of the Amazon biome for agricultural purposes is short sighted. A study published earlier this year in Environmental Research Letters estimated a 34% fall in pasture productivity and a 28% decline in soya bean yields by 2050. It warned: “The more agriculture expands in the Amazon, the less productive it will become”. Intensive short-term farming has led to previously fertile soil becoming unable to support crops, and carbon stored in the soil being released into the atmosphere.

The Brazilian government reports that the rate of man-made deforestation has decreased significantly over the last few years, although vast areas are still being destroyed: 4,656 square kilometres in the year to July 2012. Last year, however, the government rewrote the forest conservation laws, reducing protection for hilltops and other non-agricultural land. It grants an amnesty, effectively, for illegal deforestation.

The bill was introduced primarily because of pressure from big agribusiness, in the face of mass opposition. A poll found that 80% of Brazilians opposed the bill, and an international petition gained over two million signatories. Because of this pressure, the bill took over a year to become law, and was only signed off with some concessions by president Dilma Rouseff in summer 2012.

Agribusiness plays an increasingly important role in the Brazilian economy. Brazil is vying with the US to become the world’s largest soya bean producer. Brazil’s major exports are to China, with primary products making up the vast majority of the $77.1 billion exports. Manufacturing output as a share of GDP has slumped to the level of the mid-1950s. This has given agribusiness a more powerful clout over politicians. These major landowners are especially influential in the regional states which contain the Amazon biome, where they provide much local business and employment.

An illegal forester quoted in the Guardian attempted to justify his actions: “Our survival has to come from the forest. There is no other way. There are no universities here. There are no factories. If you don’t have a government job, you have to claw some kind of survival from the rivers and the forest”. This is rich coming from one of those profiteering most out of local economic conditions! But the underdeveloped nature of regional economies is a big factor, allowing agribusiness to gain some local social support.

Deforestation is often driven by demand for the natural resources found in the Amazon basin. A rise in global commodity prices was a significant factor in an increase in deforestation of 470% in March/April, as revealed by satellite images. Further encroachment could pick up speed, depending on world economic conditions.

Rouseff has implemented neo-liberal attacks on the economy, which has seen lower than expected growth in recent years. Brazil currently employs just 1,400 federal environmental police to cover the entire country. Deforestation is mainly monitored from space, a costly exercise which may come under threat. While enforcement can be stepped up in one state, illegal deforestation can increase in the next. There is also widespread corruption, with constant scandals, making it even easier for big business to avoid deforestation penalties.

There is a real battle taking place for the future of the region, which has a global impact. While big business maintains its grip, the future of the Amazon is under threat. A programme of radical land redistribution could prevent desperate small-scale farmers resorting to deforestation, and break the power of agribusiness. Use of the land surrounding the biome can and should be developed, but without encroachment and in consultation with the population, including the indigenous communities. An urgent socialist plan is needed across Latin America and the globe, to ensure the maintenance of the Amazon rainforest, tackling deforestation on the continent and rising global temperatures.

This article originally appeared in Socialism Today, journal of the Socialist Party (CWI in England and Wales).