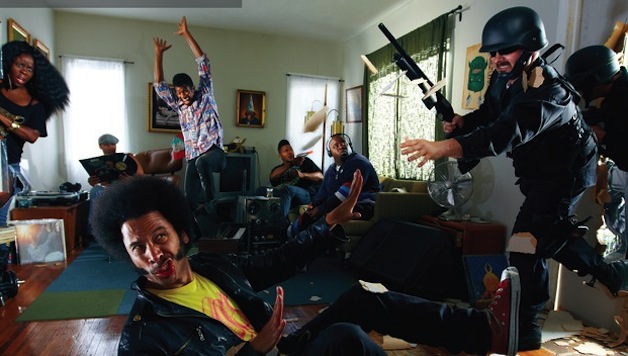 Two decades since their first LP, The Coup return from a six year break with this album which was held back a year so lead member Boots Riley could concentrate on being a key organizer of Occupy Oakland.

They lay their musical cards clearly on the table, taking cues from the agitational 80s/90s hip-hop sound of groups like Public Enemy while infusing a thick layer of funk.

Lyrically, Sorry to Bother You again puts The Coup’s anti-capitalist message through dark humor, poetry and a Marxist understanding of the economy. One track, Strange Arithmetic, calls on teachers to reveal the true nature of capitalist exploitation and corruption:

“Economics is the symphony of hunger and theft/

Mortar shells often echo out the cashing of checks/

Boots has pulled his rhymes up to a higher level than The Coup’s last two albums which were more inconsistent than their first three. With We’ve Got A Lot To Teach You, Cassius Green, Boots has written a poetic, narrative masterpiece.

Musically, since The Coup’s last album Boots has formed Street Sweeper Social Club with Tom Morello from Rage Against the Machine and toured with rock veterans.

With heavy guitar riffs and a punk track in You Are Not A Riot, the album has as much in common musically with the Clash’s later albums as with hip-hop.

This might throw off die-hard Coup fans but the result is a more accessible, driven album with their constant message of rebellion just as strong.