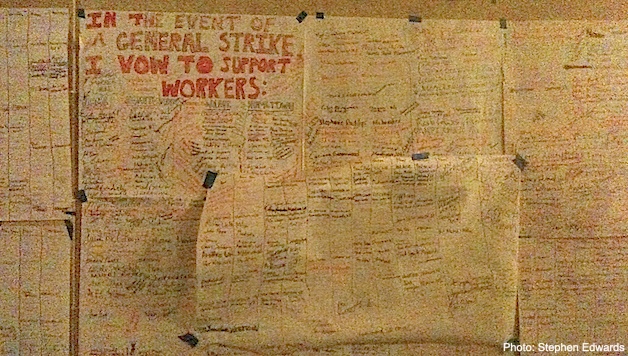 Q: What is a strike?

A: A strike occurs when workers collectively refuse to do their jobs due to some grievance against an employer or government. Strikes hurt the corporations where it matters most: in their wallets!

Q: What are strikes for?

A: Strikes are one of the most powerful means by which workers show their power, win better wages, gain rights, better their working conditions and increase benefits. Many employers and politicians, even ones worse than Walker, have been forced to back down from strikes. Working people have the power to shut down society and build a new one.

Q: What is a general strike?

A: A general strike is a strike by multiple unions in one geographical area — such as a city, state or country instead of just in a single workplace or union. Individual workplace strikes are typically used to force agreements with one’s employer over economic issues. General strikes are more commonly used to effect political change.

To overturn Walker’s agenda would require a general strike or series of general strikes, starting with a one-day public sector strike as a launching pad to further action.

In the last few years, there have been examples of general strikes in Ontario (Canada), Greece, Oaxaca (Mexico), France, Nigeria, Italy, Spain and Portugal to name a few locations. In the U.S., we saw general strikes in many cities in the 30s. This can be done!

A: Yes, public sector strikes are illegal in Wisconsin. However, Walker has shown no regard for the law in the way he’s pushed through his anti-worker agenda. Unions were once illegal while child labor and segregation were both once legal. The labor and civil rights movement were built through breaking the unjust laws of the bosses. After we showed that the state couldn’t enforce racism or anti-union laws, the laws were changed.

Under state law, the employer is legally allowed to fire strikers, and assign prison terms for up to a year. The state is also allowed to fine individual members or the union as a whole for up to $2,000 per day. However, a powerful, well-organized strike can overcome these illegalities. For instance, in 2004, the TAA, representing teaching assistants at UW-Madison, was able to go on an illegal two-day strike without any reprisals from the state. Furthermore, the labor movement wouldn’t exist if it weren’t for workers engaging in illegal strikes.

Q: How can workers be protected from reprisals during a strike?

A: The more people go on strike, the harder it is for repressive measures to take effect. They can’t arrest us all, and a lot of the laws are just scare tactics. It would be political suicide if Walker tried to fire or arrest every teacher in Wisconsin. If he did, the labor movement nationally would need to rally to their defense with mass action that would shake the country and beat back the anti-union agenda.

If a strike is successful, it usually includes a no-recrimination clause that negates any punishments.

A: When Wisconsin teachers led sick-outs during the first week of protests, their public support increased dramatically. People like a winner. The more we show that we can take decisive action to win this struggle, the more people will rally to our defense.

A general strike should not shut down vital emergency services like ambulances or other safety precautions, and strike action should utilize all the creative energy and culture of solidarity we saw in the Capitol occupation to feed families, take care of kids and provide necessary services for working people.

In the case of Walker’s budget repair bill, it has become clear that it is a brazen attack on all ordinary people and their services. By defending all jobs and services, public sector workers can increase their support through striking.

If unions can be portrayed as only defending their right to take people’s money to elect Democrats and pay the leadership, then that will hurt public perception. Striking against all cuts can challenge the notion that unions are only interested in their members.

Q: Are there any dangers in NOT striking?

A: As long as the budget repair bill is in effect, workers are in serious danger. Under the bill, public sector unions are unable to bargain over anything other than wage decreases. These unions are being stripped of their organizing power, and under the new laws, unions are unable to automatically collect dues. Unions are forced, under this bill, to devote what resources they have left to carrying out annual re-certification votes. The first of these votes must be held by the end of April, before any recall campaign can take effect.

If no action is taken to stop Walker now, the entire Wisconsin labor movement is in danger of being decimated for many years to come.

Q: How can a strike win?

A: A strong strike needs to be well-prepared. The situation is urgent, and we would need to prepare now for effective strike action. Emergency mass union meetings should take place early this week to discuss the way forward. Committees for strike action should be built in every union, campus, community and workplace. While no union or group of workers should be left alone on indefinite strike action, one-day strikes can be used to build momentum and organization.

A one-day public sector strike would need to be a launching pad to further struggle. Mass rallies of private sector workers, the unemployed and youth would need to be organized throughout the state. Student walkouts would need to be planned in every school. Mass direct action could be used to target businesses that support Walker. These sound like big tasks, but the push forward needs to start with us and with you to start building a resistance willing to step up and beat back Walker.

Sometimes, strike actions aren’t enough. We could really put corporations on the defensive if we ran independent candidates against these cuts. We need candidates that expose the practices of these corporations and refused to take big-money donations. This could be a step towards what we really need: a new independent political party of working people that was backed by the unions, the unemployed, youth and community groups. Such a party would need to have democratic decision-making and a fighting program. A workers’ party would need to refuse corporate donations and be willing to struggle in the streets and workplaces for better living conditions alongside the electoral struggle.

When we look at the history of our unions across the world (and especially in Wisconsin), we see that people who had a clear pro-workers, anti-capitalist, and socialist vision played a leading role in building our unions. We need a core of activists to learn the lessons of history, push struggles forward and build a democratic socialist organization. If the bosses’ system can’t afford good jobs, rights, services and benefits, then we can’t afford their system!

The dangers of complacency are greater than the dangers of strike action. We need to act decisively. We CAN win, but only if we fight!

Basque Country Strikes: A Safe and Consensual Return to Our Schools

Belarus: Endgame Being Played out