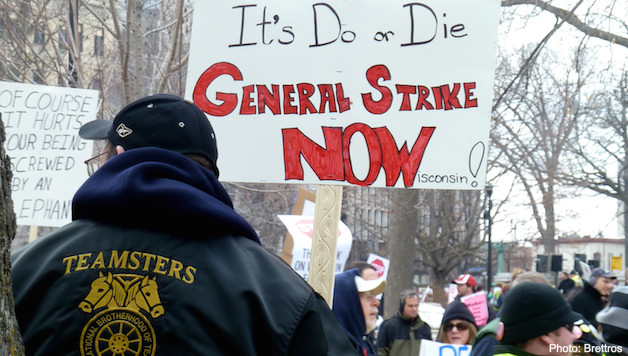 On March 9, Wisconsin Governor Scott Walker and the Republican Senate used an illegal maneuver to push threw his anti-union bill without the return of the fourteen Senate Democrats. Already it has provoked a massive new wave of protests and actions. Click here for more background of the situation.

Bigger and bolder action is still needed and increasingly there are calls for a general strike. Here’s a video of the president of the Firefighters Local 311, Joe Conway, supporting a general strike:

Socialist Alternative is actively campaigning for urgent preparation for general strikes and other actions to escalate the struggle until Walker backs down. Below is a reproduction of a leaflet we will be distributing in Wisconsin this weekend.

Also if you’d like to help us, please consider making a contribution today.

Governor Walker has pulled a coup! This illegal move to force through the union-busting bill cannot stand. We need to immediately set the date and prepare for a one-day public sector strike as both a warning shot to Walker and a launching pad to further action.

This maneuver means the movement cannot now simply rely on the fourteen Senate Democrats to hold out. A recall or a legal challenge would take too long. The time to act is now! This means immediately developing a coordinated plan for stepping up the struggle through rapid strike action and emergency meetings of unions and working people.

The revolt in Wisconsin has captured the imagination and support of millions of working people and youth from coast to coast. As Michael Moore stated, Governor Walker’s “class war” has “aroused a sleeping giant” of working class anger against corporate America and their politicians. There are more and more calls for a general strike because people correctly see the need for bolder action. We must rapidly act to make these calls a reality.

We should start with a one-day full shut-down of the state as soon as possible by organizing a public-sector general strike supported by mass mobilizations of all working people and youth who are prepared to fight. This can only be the first step to demonstrate the power of organized labor. We must be fully prepared to carry out a series of general strikes, that also involve the private sector, and other actions until Walker backs down.

Many fear the repercussions of a strike because it is not legal. Walker and the Republicans have shown no respect for the law, and we can’t allow legality to keep our movement in a straightjacket. We must remember that the union movement and civil rights movement were built by those prepared to defy unjust laws. As Dr. King said, “there are two types of laws: just and unjust…One has not only a legal but a moral responsibility to obey just laws. Conversely, one has a moral responsibility to disobey unjust laws.” The laws preventing us from taking strike action are unjust, and we must break them.

So far the top union officials have not put forward a clear plan of struggle and they are not likely to do so unless we build the necessary pressure from below. All labor activists must call for emergency mass meetings of their unions to democratically decide the way forward and organize for a general strike.

Not only do we deserve collective bargaining rights, we must counter the lies that workers and unions are the cause for this crisis. Wall Street is to blame, and they should be forced to pay. By demanding to kill the whole bill and taking no concessions, we can unite and mobilize the widest possible forces around the idea that all working people have the right to unions, good jobs, benefits and a decent life.