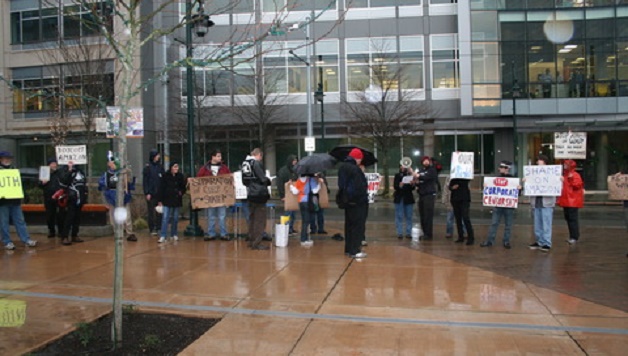 On Monday, December 13th, the courtyard of Amazon.com’s headquarters was flooded with a cacophony of whistles and chants as 50 people protested against US government censorship of the whistle blowing organization Wikileaks. Despite the driving, cold rain the spirited protesters sent a clear and unambiguous message to Amazon.com that their decision to censor Wikileaks, by removing Wikileaks website from their servers, would not be met by silence.

Under pressure from the U.S. government, Amazon.com was the first in what has become a string of companies who are restricting our right to know what the government is doing by disrupting access to the Wikileaks website, and thus the diplomatic government cables, and refusing to process donations as in the case of PayPal, Mastercard and Visa.

This is an egregious attack on our freedom of information, press, and speech – crucial foundational elements of democracy. This also represents an attempt to quell growing opposition to the unpopular wars in Iraq and Afghanistan as many of the cables reveal a concerted effort on the part of both the Bush and Obama Administrations to deceive the people of the US and the world in order to wage its wars in the Middle East.

Joining the ranks of millions outraged at this unacceptable assault on our democratic rights and drawing inspiration from the hundreds who protested in Brisbane Australia and Britain against Wikileaks censorship as well as the millions across Europe who took bullhorn in hand to resist the savage cuts to social programs, the protesters swelled with indignation and belted out “Freedom of Speech under attack what do we do? Stand up, fight back!” Unfortunately the corporate media, despite entreaties to the contrary, did not deign to send a single reporter, leaving it to ordinary working people and youth to oppose the treacherous role played by both the U.S. government and corporations and defend our rights to freedom of the press and speech.