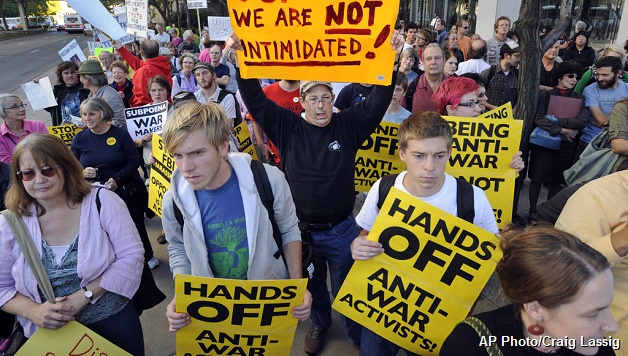 In a coordinated national effort last Friday morning, the FBI raided six homes and an antiwar office in Minneapolis and Chicago, while they questioned activists in Wisconsin, North Carolina, Michigan, and California. Subpoenas were issued for a grand jury in Chicago on October 12. While full information is not yet available, it seems many if not all the targeted antiwar activists are involved in Freedom Road Socialist Organization (FRSO).

These raids and this harassment of leading antiwar activists are naked acts of political repression which must be vigorously opposed. In Minneapolis, a community solidarity meeting Friday evening drew over 200 supporters together on only six hours notice. A call for solidarity actions across the country drew nearly 500 to a protest Monday in front of the Minneapolis FBI headquarters, and actions are reported to be happening in 19 cities Monday and today.

The raids are connected to a Joint Terrorism Task Force investigation, and the search warrants, one of which was published on tc.indymedia.org, focus on allegations of “providing, attempting, and conspiring to provide material support to designated foreign terrorist organizations.”

The warrant also authorized FBI agents to search for information related to the “recruitment, indoctrination, and facilitation of others … to join FRSO including materials relating to the identity and location of recruiters, facilitators, and recruits, the means by which the recruits were recruited to join FRSO, and the means by which recruitment was financed and arranged.”

This is an attempt to demonize and criminalize the basic activities of a political organization. It amounts to a fundamental assault on constitutionally guaranteed rights to freedom of association and speech. It represents a serious attack on the antiwar movement, labor organizers, left activists, and anyone else who dares to organize against the U.S. government. Antiwar activists and civil libertarians have repeatedly warned that the so-called war on terrorism and the Patriot Act would be used to suppress government critics here at home.

The FBI appeared to be primarily targeting activists organizing against U.S. policies in Colombia and Palestine, where for years American tax dollars and weaponry have been used to brutally suppress popular movements for social justice. Specifically, the search warrants cited connections to FARC, a Colombian guerilla organization at war with the right-wing U.S.-backed Colombian government and the brutal paramilitary groups. The warrant also alleged links to Hezbollah and the Popular Front for the Liberation of Palestine, who alongside FARC are on the U.S. list of foreign terrorist organizations.

Socialist Alternative defends the right of oppressed peoples to defend themselves against imperialist and state violence. However, we have always opposed the anti-democratic politics and guerrilla tactics which emphasize armed confrontations or attacks by small radicalized minorities or which base themselves on religious sects.

At the same time, we absolutely defend the democratic right of U.S. antiwar activists to support the struggles of oppressed peoples in the neo-colonial countries free from government surveillance and repression. The real criminals are at the head of the U.S. war machine, which continues to rain down brutality on the peoples of Iraq, Afghanistan, Colombia, Palestine, and beyond.

The timing of the FBI raids and grand jury investigation was almost certainly designed to coincide with Obamas meeting with new Colombian president Juan Manual Santos on Friday, which was publicly billed to include discussion on continued U.S. assistance in the war against FARC. The day before, the Colombian military gained U.S. headlines for their assassination of a prominent FARC leader.

The assassination and FBI raids appear intentionally coordinated to provide a useful media back-drop for the Obama-Santos meeting, underlining the cynical and politically motivated character of this state repression. Hopefully these events will dispel any lingering illusions that Obama is a friend of the antiwar movement!

SocialistAlternative.org will continue to feature updates and analysis on this story. Also see www.tc.indymedia.org for regular updates.