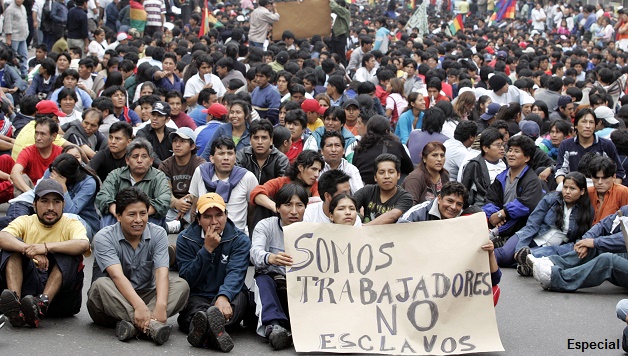 In the elections of December 2009 and April 2010, once again the oppressed Bolivian masses showed their desire for fundamental change to eradicate the deep problems which continue to plague this country.

The people gave an enormous victory to Evo Morales, who won the presidency with 64% of the vote and the Movement towards Socialism (MAS) party captured absolute control of the Senate and Camera of Deputies, while electing governors in 6 of 9 departments and mayors in 196 of 337 counties.

In part, it was a demonstration of approval of the changes of recent years: the partial nationalisations of the gas, telecommunications, and electricity industries which massively increased state income and made a whole series of pro-poor social programs possible. These programs include a substantial increase in social security, subsidies for school children and pregnant women, and a literacy program, which, according to the UN, has eradicated illiteracy in Bolivia.

Nonetheless, in spite of these reforms, the poverty rate amongst the masses remains the same, with more than 60% of the population living on $2 or less per day and the multinational corporations, business elite and large landowners continuing to take the lion’s share of Bolivia´s immense natural wealth.

Above all, therefore, the recent MAS electoral victory was a vote in favor of a better future based on fundamental change.

In essence, however, the MAS government is following the path of a traditional party, looking to consolidate its power through pacts with the right wing opposition, a mix of populist reforms and neo-liberal politics, and the strengthening of a state bureaucracy.

After numerous electoral successes and victorious mass movements, the Bolivian struggle finds itself at a crossroads: either we mobilise the masses and advance to socialism or the tendency towards bureaucratisation and the right will deepen, causing the downfall of the Bolivian struggle.

Recently, the MAS has continued the pacts with the right wing, similar to those we saw in December, with the alliances with business sectors and former leaders of the Santa Cruz Youth (a ultra-right, semi fascist, “collision group”) and in April, with the right-wing candidates such as Robert Fernandez, a multi-millionaire right-winger who was the MAS´ mayoral candidate in Santa Cruz. Now, there are more pacts, as the political parties battle for control over city councils.

In the process, the MAS government has become increasingly bureaucratised, forming these pacts and also naming numerous candidates without any participation whatsoever of the base of the party.

The union and peasant leaders who now find themselves within the government also play a conservative role. The national leadership of the Bolivian Workers´ Center (COB) demonstrated this during a recent struggle by workers for a decent wage increase.

Originally, the MAS government proposal included not only a meager wage increase of 5%, but also included reforms to labor law that eliminated the right of public sector workers to go out on strike. Incredibly, the national leadership of the COB was originally prepared to accept this proposal until the more independent and radical factory workers, teachers, and health workers´ unions resisted, forcing the national leaders to present a show of struggle, calling an indefinite general strike but then doing nothing to guarantee its success.

They didn’t mobilise their mass base of workers, they didn’t produce and distribute material to explain the workers´ demands and win the support of the general population, nor did they try to connect the workers´ struggle with other indigenous peasant sectors currently in struggle. They didn’t organize pickets, blockades, nothing. They just put out the call for a general strike and waited for its inevitable failure to justify a revised agreement with the MAS.

In the end, thanks to mobilisations of the factory workers, teachers, and health workers, the attack on the right to strike was defeated, but the wage increase of 5% stuck. The need for a union leadership willing to prepare the working class for struggle based on grass-roots democracy, class independence, and socialism was crystal clear.

In terms of the economy, there are profound contradictions between the anti-capitalist discourse of Morales and the respect for the contracts with multinational corporations, in the mining and gas sectors in particular. For example, from 2006-2009 alone, multinational mining corporations took out an estimated $4.4 billion in reported profits from Bolivian mines (actual profits could be double that according to the Bolivian government) while paying a measly $250 million in taxes -less than 5%.

The government’s pursuit of new contracts with multinational mining companies like Jindal from India, while at the same time Morales gives anti-capitalist speeches and convokes international conferences to fight the environmental crisis also highlight the contradictory nature of the MAS government.

The government justifies its actions as part of a “strategy” to realise democratic and peaceful change, but in reality it is throwing a life boat to the right-wing opposition that had already been defeated in the Gas Wars in 2003 and 2005 (when two neo-liberal governments were overthrown by mass movements) and in September 2008 (when a violent right-wing separatist movement was defeated by mass mobilisations) and that could still be defeated by mass movements armed with a socialist program.

On the other hand, with the current “strategy” of the MAS, the right-wing lives on, maintaining its economic power and a political presence. At the same time, the masses are demobilised, they don´t feel concrete changes, and frustration and division are growing.

This is especially dangerous because the moment the social movements weaken, the response of the right-wing opposition will be neither “democratic” nor “peaceful. It will recover its control and it will eliminate the changes through brutal repression of the people.

We need grass-roots democracy and socialism

The struggle cannot be won through pacts with the right and bureaucratic maneuvering. To overcome these tendencies and get on the path towards socialism, we need grass roots democracy in the social movements.

The base of the MAS, the unions, the peasant federations, the neighborhood organisations (juntas vecinales) and revolutionary students and professionals have to struggle for it. We should organise popular assemblies in the main cities of Bolivia to establish fronts for grass-roots democracy within the MAS, unions, and every other sector of the social movements.

A socialist Bolivia is possible

With such commanding control over the state apparatus, if the MAS focused on the organisation and mobilisation of the millions of oppressed masses within its base, we could advance to socialism: