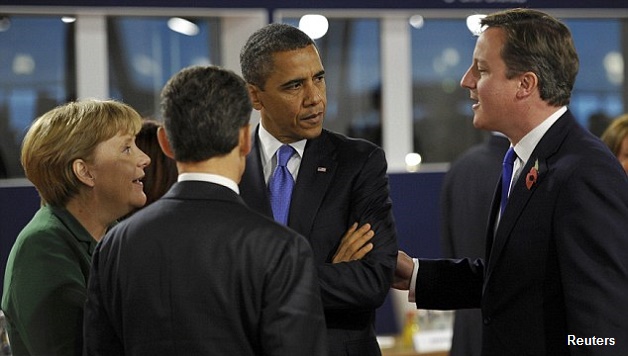 This article first appeared in The Socialist, weekly journal of the CWI in England and Wales

The G20 meeting in Toronto of the leaders of the main capitalist governments of the world demonstrated a complete incapacity to solve the huge problems that confront us, particularly those hardest-hit  the poor and the working class  by the economic crisis.

This was supposed to be the economic summit that would celebrate the so-called economic stimulus packages introduced by capitalist governments throughout the world, which saved capitalism from a depression. Instead, in a dizzying switch over a matter of months, the prevailing view at this meeting was in favour of those governments such as Britains ConDem coalition, led by David Cameron, that are savagely cutting public expenditure.

The summit papered over the cracks  in effect glaring divisions  between the Barack Obama government in the US and its supporters on one side and the European capitalists on the other. Thirty million people are unemployed in the US and whole states are collapsing under the burden of debt; Obama requires not cuts but a new stimulus package to prevent defeat in the mid-term elections in November. But the US Congress is against this and has turned down further stimulus.

The budget-slashers of Europe threaten to compound the problems of the US and world capitalism by their actions. Foremost, of course, amongst this group is the British government.

The full horror of the proposed cuts and their implications are only just dawning on commentators. William Keegan wrote in the Observer (27 June): The old Soviets used to indulge in five-year production plans; the Cameron/Osborne Tories believe in five-year reduction plans.

The miserly growth rate of Britain, Europe and indeed world capitalism, if it can be called growth, threatens to lengthen the queues of unemployed. It will not make up for the damage which has been inflicted already. Growth in Britain is expected to be just 1.25% this year after a fall of almost 5% in 2009.

When the government and capitalist economists talk about recovery, they are only talking about a technical recovery. There is no new growth phase for either British or world capitalism. The Organisation for Economic Co-operation and Development (OECD) and the International Monetary Fund (IMF) have been forced once more to scale down their forecasts for growth in the world economy this year. Dominique Strauss-Kahn, IMF managing director, has pointed out that growth at 2.5% below what was first predicted as possible, means that 60 million jobs will not be created this year.

Keynesian capitalist economists are in despair. Their views seemed to be in the ascendant in the immediate aftermath of the crisis breaking in 2007-08. Now, terrified by the implications of huge deficits, European capitalism, at least, has moved in the opposite direction towards austerity stretching into the indefinite future.

Keynesianism means, in effect, priming the pump, boosting economic expenditure through the state as a means of preventing further economic collapse. The dilemma arising from this is who pays? If it is the working class through increased taxes, it cuts the market. If it is the capitalists through increased taxes or other measures, it would threaten a strike of capital, the withdrawal of investment, closure of factories and a big rise in unemployment. If there is a resort to the printing press not backed up by production of goods and services, it will ultimately result in inflation.

But the method now of savage cuts is a case of the cure being worse than the disease. The economist Joseph Stiglitz is scathing about the new age of austerity: Its not just pre-Keynesian, its Hooverite (the Independent, 27.6.10). Herbert Hoover was the president of the US at the time of the 1929 Wall Street Crash. Hoover had this idea that, whenever you go into recession, deficits grow, so he decided to go for cuts. The result was the 1930s Great Depression. Hoover received this advice from his Treasury secretary, Andrew Mellon: Liquidate labour, liquidate stocks, liquidate the farmers, liquidate real estate … purge the rottenness out of the system.

This has been underlined by the brutal austerity measures of Chancellor George Osborne, backed up by the rapidly discredited Liberal Democrats. This government, in its callous attacks, shows all that historic cold cruelty of the British capitalists. The Observer estimates that there has been a halving of support for the Lib Dems in less than two months.

Indeed, throughout Europe, from Angela Merkel in Germany to George Papandreou in Greece, where they have engaged on the road of austerity, capitalist governments have seen their popularity crash. In the case of Merkel, she has almost been reduced to a figure of fun in the German capitalist press.

The British governments austerity programme promises, in effect, a one-third reduction in all government departments with the exception of international development and health, which the government claims are ring-fenced from cuts, and education and defence which are cut less. This means a cut in state expenditure on the scale of the Geddes report of 1922, whose implementation led directly to the general strike in 1926. However, before it reaches the target of one-third cuts, the government will be overwhelmed by a tsunami of opposition.

The idea that the private sector can take up the slack of these cuts is totally wrong. The day after the end of the G20, the Independent reported: British manufacturing will slide to a woeful 20th position in the world competitiveness rankings over the next five years. Even US manufacturing is set to fall from fourth to fifth as it is overtaken by Brazil. In fact, Obamas failure to impose his agenda on the G20 is a sign of US capitalisms weakness  although its economy is still the most powerful in the world.

At the moment, the UK is the seventh largest manufacturing sector in the world, led by the pharmaceuticals, food and the aerospace and defence sectors. It still accounts for 14% of UK gross domestic product (GDP) compared to just 7% for financial services. But the share of manufacturing in total GDP has dropped from 20% a decade ago. Nothing the government has done can restore this position. Indeed, millions of jobs in the private sector are dependent on the public sector and they will be hit as the cuts bite.

The situation is so serious now the budget-slashers are installed in power that most capitalist economists predict a double-dip recession. In effect, the world economy stands on the edge of deflation because of the measures taken. China will not show a way out of the crisis, as hoped for by Obama and the European capitalists. Obama has been pressing China for a revaluation of its currency to make Chinese exports more expensive, providing opportunities for the US and other economists to grow their exports. But following Chinas decision to allow some flexibility in its exchange rate, its currency has appreciated by just 0.4% against the dollar in the last week!

To add insult to injury, all these cuts will not improve the position of the economies on which they will be inflicted. The governor of the Bank of England in the 1920s and 1930s, Montagu Norman, imposed the Gold Standard on the economy. Later on he acknowledged: As I look back, it now seems that, with all the thought and work and good intentions, which we provided, we achieved absolutely nothing Nothing that I did, and very little that [others] did, internationally produced any good effect  or indeed any effect at all except that we collected money from a lot of poor devils and gave it over to the four winds.

The working class are the poor devils who will suffer. What this demonstrates is that capitalism is a blind system with the likes of Osborne flying blind. Their sole purpose is to satisfy the markets, a handful of bond traders, speculators and capitalists who have no other interest than to increase their share of the loot.

The demonstration of bankruptcy in Toronto must be taken by the working class in the US, Europe and worldwide as a signal to begin an offensive to confront the capitalists and their system now. We must start in Britain with a mass campaign to resist every single cut  what is at stake here is the very existence of the welfare state whose gains were conquered by successive generations of the working class. If the national trade union leaders are not prepared to lead, then a movement must come from below.

This was the call from the tremendous National Shop Stewards Network conference held in London last Saturday. We must implement the call made there for the trade unions to organise a national demonstration at the TUC conference in September and if this does not move the summits of the movement then action must be organised from below. Capitalism shows no way out; a fighting, militant, combative approach is necessary in day-to-day struggles of the working class, above all on the cuts, linked to the idea of the socialist transformation of society.