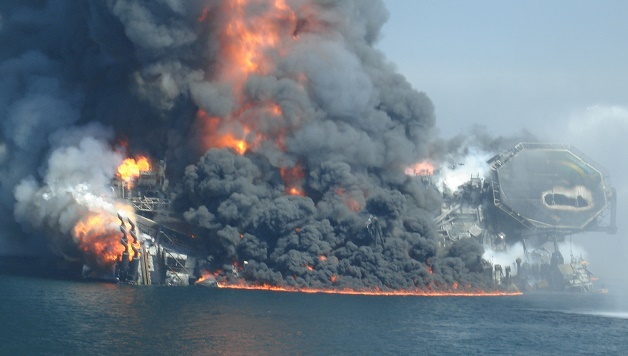 The disaster caused by the explosion of the Deepwater Horizon oil rig was a human disaster but not of the workforce’s making. It is due to decisions of the oil companies and the government.

A year ago, BP, the oil company leasing the rig, did an environmental study of the operation. This study claimed there was almost no possibility of a severe failure which would produce a large oil spill. This incredible statement was accepted by the US government. Somehow they all kidded themselves that while drilling for oil a mile below the sea’s surface nothing could go wrong. It is clear that because of this claim there was no emergency plan. In fact, initially after the explosion BP was in denial, claiming that no oil was leaking! Now they are scrambling to try and find a solution to something they claimed would not happen.

Eleven people are dead, an oil slick 210 kilometers long and 110 kilometers wide is heading towards the ecologically vulnerable coast, and many birds, fish, marine mammals, plants and organisms will be killed. The fishing and tourist jobs of the area will be devastated.

Politicians are saying that things have to change, but will they? Just a few weeks ago President Obama announced he would allow increased off-shore drilling for oil on the U.S. coast, claiming that the modern oil rigs are safe and don’t cause big oil spills.

Much of the blame has been directed at BP, which undeniably has a terrible safety record. But are the other big oil companies better? Exxon was responsible for the worst oil spill in US waters, the Exxon Valdez in Alaska. Shell has a terrible environmental and human rights record in Nigeria. Texaco (now owned by Chevron) had an equally bad record in Ecuador. All the oil companies act in a similar way.

This devastation of the environment and trampling on workers’ and human rights is part of the real price of oil. Capitalism is totally dependent on cheap oil. This is the biggest addiction in history. While there are conferences and speeches about sustainable production, climate change, and moving away from oil, the reality is totally different.

Previously “British Petroleum, BP’s recent advertising campaign has attempted to re-brand the company image and name to “Beyond Petroleum.” The company tries to present itself as a green company. Don’t believe the hype!

For big business and their politicians, the biggest worry is not climate change but peak oil. About half of all the available oil in the world has been used and what is left is harder to extract and process. The Pentagon recently produced a report which points to growing oil scarcity and states that by 2015 worldwide “the shortfall in output could reach nearly 10 million barrels per day.” As the world uses 90 million barrels a day now, and consumption is rising, a shortfall of 10% is bad news.

So oil companies and governments around the world are seeking oil in ever more dangerous circumstance and from more polluting sources. That is why they will continue to drill for oil in the oceans of the world.

The Tar Sands of Alberta demonstrate how desperate the current search for oil is. The Tar Sands are polluting a huge area of northern Alberta and beyond and produces 10% of Canada’s CO2 releases. The governments of British Columbia and Canada are going ahead with plans to allow tankers into the narrow inshore waterways of the west coast – similar to the Alaskan waters where the Exxon Valdez spewed oil in 1989. This is to connect with a pipe line taking gasoline out and natural gas into Alberta Tars Sands.

The world is awash with renewable and relativity clean energy, but the oil companies, the other oil-dependent companies and their hired politicians are more concerned about keeping the oil drug supply going than saving lives, protecting health, protecting the environment or tackling climate change. A sane society would invest in renewable energy and energy efficiency. The disaster of Deepwater Horizon is another reason to fight for a democratic socialist society, where a rational plan of production could put people and the planet come before profits.