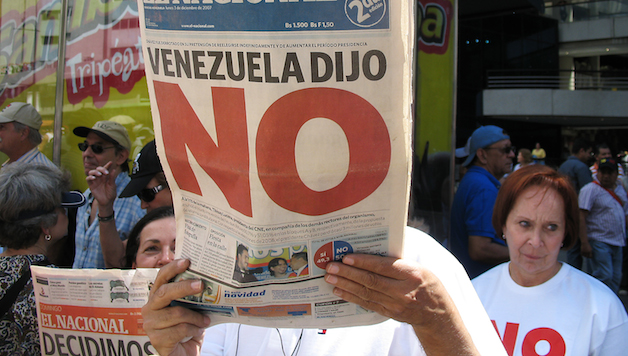 One month after the defeat of his proposed constitutional changes in a referendum, Venezuelan president Hugo Chávez announced that he has decided to abandon his agenda for 21st Century socialism for now and adopt a new political course aimed at placating the middle classes, the private sector, and the right-wing opposition.

Chavezs explanation of his change of course is that the country had not been ready for radical change. However, the result of the referendum was more a rejection of the slow pace of the changes as well as government corruption. Chavezs change of course risks alienating his popular base and will embolden the right wing.

This is the first time Chávez has lost any vote since becoming president in 1999 and is a big setback. In last year’s presidential election, Chávez was re-elected with 63% of the vote.

It is also a warning that the proposed changes in the constitution were enough to unite the opposition but not sufficient to take the Venezuelan revolution forward at this key stage.

Despite Chávez’s victory in the 2006 election, Venezuela’s right wing had united around candidate Manuel Rosales, who secured 37% of the vote and had organized the largest-ever anti-Chávez demonstration of 300,000. Earlier last year, mainly wealthy and middle-class opposition students won a reported 91% of the votes in student elections. The opposition was further boosted by the defection of former defense minister General Baduel in November.

During the referendum campaign, the right wing played on the fears of a section of workers and the Chávista-leaning middle class by stressing Chávez’s top down approach.

The new constitution would have ended the maximum of two fixed terms of office for the presidency. Instead, it would have allowed an indefinite re-election of the president, with a term increased from six to seven years.

Chávez would also have been given the ability to appoint an unrestricted number of secondary vice presidents, impose a state of emergency in which the right to information would disappear, and would give the military the role of protecting the “explosion of popular power.”

The frustration of some workers and sections of the middle class at the slow pace of the revolution, linked to a consolidation of control from above, were factors in Chávez’s referendum defeat. Despite previous reforms, according to official figures poverty is still at 30% with a massive housing deficit of 1.5 million homes.

The new constitution would have also introduced important measures to improve the lives of working-class people: reduction of the maximum working week from 44 to 36 hours, reduction of the voting age from 18 to 16, a social security fund for Venezuela’s army of informal sector workers, and the right to adequate housing and free education.

Chávez had said these reforms were necessary to “construct a new socialist economy,” but the proposed changes would not have introduced a “socialist economy” even if adopted. It was planned to bring the Central Bank under government control, nationalize industries where demanded by the workers themselves, strengthen public ownership of the country’s oil and gas reserves, and extend a non-capitalist social economy based on cooperatives, a type of parallel economy to the capitalist economy that already exists.

What was not planned in the new constitution was the taking over of the decisive sectors of the economy. In fact, Chávez and his ministers have repeatedly stated that their aim is not to take over the economy, and they have invited the private sector to cooperate.

Partial measures taken against big business still allow them a base upon which the forces of counter-revolution can organize and strike back against the revolution. While the working class and the urban and rural poor have mobilized to save Chávez on three occasions, the threat of counter-revolution has not and will not disappear until the socialist revolution is completed and consolidated.

It is vital that the correct conclusions are drawn by workers and youth in Venezuela and worldwide from this referendum defeat. Chávez, reflecting on the defeat, said it was possible that Venezuelans were not yet mature enough for socialism.

However, the defeat was not because the revolution has gone too far but because it has not gone far enough. To win over the mass of the working class, peasantry, and middle layers, a bold socialist program is necessary. But such a program cannot be handed down from above; it must be forged out of the experience of the struggle of the masses from below.

An urgent task now in Venezuela is for the working class to build their own independent organizations to take decisive action to end the political and economic power of the capitalist class and introduce genuine workers’ democracy.

That process cannot be a step-by-step series of reforms that eventually end up in socialism. There can be no socialism without bringing the commanding heights of the economy under public ownership and putting it under workers’ democratic control and management.