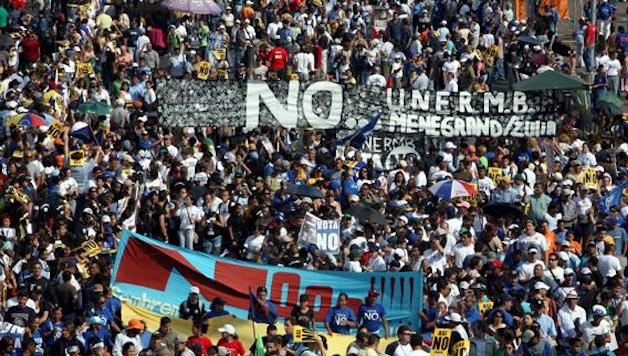 Need for a Socialist Alternative

The constitutional referendum called by Hugo Chavez in Venezuela on December 2 has unfortunately and tragically resulted in a defeat. For the first time in nine years Chavez has lost an election. The right wing opposition will claim this victory as theirs. This defeat for Chavez will embolden and strengthen the rightwing and is a warning of the threat that exists from the counter revolution. 50.7% voted no to the proposed changes with 49.2% voting yes with 44% abstaining. In comparison to the last vote, the December 2006 presidential elections, Chavez lost 3 million votes winning 4 million for the yes vote. This was less than the membership of the newly launched PSUV which it claims stands at just over 5 million! At the same time the right-wing gained 300,000 votes compared to the election in December 2007.

This result is a setback for the Venezuelan government and its project of “Socialism in the 21st century”. Chavez proposed 69 changes to the constitution that was adopted in the 1999 referendum. The most important changes removed the limit on the re-election of the president, introduced a 6 hours day and proposed to recognise workers and community councils. The new constitution would have also renamed Venezuela as a “Socialist Bolivarian republic”. The underlying reason for this defeat lies in the contradictions and weakness in the programme and methods carried out by the government and leadership of the movement. Despite important progressive reforms that have benefited the poorest sections of society capitalism remains along with desperate social problems and a growing bureaucracy.

The social situation in Venezuela is overflowing with contradictions. The Venezuelan economy is booming with the middle class and ruling elite gaining the most. At the same time the government, while introducing social reforms which have benefited the poorest layers, has not been able to reduce poverty substantially or crime. The gap between poor and rich has persisted and the situation in the poor areas of Caracas has deteriorated. In 2006 Caracas had a murder rate of 5 a day. Last November on average 11 people a day where killed mostly in the poorest neighbourhoods. While the rich and middle class can buy the latest technology and eat in the most refined restaurants most people are suffering from the food shortages created by the big food producers and distributors. Recent opinion polls revealed that 75% of the population has suffered from food shortages. It is normal that milk, rice, beans and other basic foodstuffs are unavailable in the state sponsored supermarkets. The government has been unable to solve the problem. It has not taken measures to expropriate those who sabotage the economy and plan food production. Instead it has increased Venezuelas dependency on imports. This has impacted on public opinion. Last month an opinion poll found that 75% of the Venezuelan thought that food shortages were being created by the employers as a means to sabotage the government. Last week, before the referendum, the same opinion poll found that most Venezuelans blamed the inefficiency and the corruption of the government. Frustration and anger at the social conditions and growing government bureaucracy resulted in a low turn out from the poorer districts. This was mirrored by a high level of mobilisation and turnout in the richer and middle class districts in the east of Caracas.

The Venezuelan economy is dominated by five big oligarchic families (Cisnero, Mendoza, Caprile, Boulton, and Phelps) who control amongst other things the production of food. There can be no lasting solution to the crisis created by capitalism as long as they remain in control of the economy. A socialist government would nationalise their industries under workers control and management. Up to now the government has not been prepared to do this.

The pro-Imperialist opposition will seek to use this result to further destabilise Venezuela and turn back the clock on the pro-poor reforms of the Chavez government and the idea of socialism. This will not only have an effect in Venezuela but quite possibly also for the reformist governments in Bolivia and Ecuador. Cuba’s Fidel Castro warned last week of the effects a Chavez defeat in the referendum could have for Cuba. According the Spanish newspaper El Pais Cuba receives 7 billion dollars worth of aid from Venezuela.

Opposition strengthened and political crisis for the pro-Chavez parties

After the presidential elections of December 2006 the Chavez government took a turn to the left, reinforcing the message of socialism and nationalising the telecommunications company CANTV and the electricity company “Electricidad de Caracas”. Chavez also talked about permanent revolution and quoted Trotsky. We applauded these steps but pointed out that for these nationalisations to have an effect it was necessary to take over the main sectors of the economy and place them under workers control and start to work out a democratic plan of production. This did not happen.

Instead the top down, administrative, bureaucratic approach which characterises the Chavez administration persisted. The nationalisations and introduction of co-gestion or co-management in some factories are an example of this approach. Whilst workers have been given a say in how their company is run for the first time, the government has tried to keep tight control by appointing the majority of the managers. Whenever it has come to conflicts between independent minded UNT trade unionists and the government ministers or bureaucracy, the government has imposed its will. Chavez threatened these trade unionists saying that he was not in favour of trade union independence from the government and that they should all join the new party, the PSUV. Chavez has repeatedly stated that the PSUV has to be built as a democratic organisation, built and controlled by the basis. However, he then went on to insist that the parties in the Chavez coalition should dissolve themselves and join the PSUV. Parties who did not want to do that were isolated and sometimes dismissed as pro-opposition, even if this was clearly not the case such as with the Communist Party of Venezuela. Now local branches have been set up and the delegates are being elected for the founding conference it is clear that it will be controlled at the top by the politicians who came over from the other pro-Chavez parties.

This top down approach has played into the hands of the opposition. They claim that Chavez wants to install a Cuban style one party regime. This has begun to receive a wider echo because of the bureaucratisation and the corruption of the people around Chavez and fears of a “creeping dictatorship” being imposed. Further actions, like the revoking of the broadcasting license of RCTV (a pro opposition television station), have also played into the hands of the right wing opposition and allowed it to increase the fears of the middle class and others about the threat to democracy and democratic rights. The RCTV was an issue around which the right-wing started to re-group and reorganise itself. The CWI warned about this danger in an article “RCTV and the question of the media” in July 2007.

The result in the referendum is a blow to the Chavez government. It is not a decisive defeat and does not mean that the pro-Us opposition will be able to take control of the country or immediately overthrow the government. This could result in Chavez moving to the right and strengthening the counter-revolution. Alternatively if the right should try and overreach itself and go on the offensive it could provoke a backlash from the masses driving the movement even further to the left. However the defeat in the referendum will strengthen and embolden the rightwing counter revolution and is a serious warning to the working class and masses. Emergency measures have to be taken. A decisive campaign against bureaucracy needs to be built. The trade union should take the lead in building democratically elected committees in the work places and the neighbourhoods to put forwards its demands and campaign on them. These committees could begin to organise as a counterforce to the corrupt state institutions and officials and establish a genuine system of workers control in the work places. The working class needs to put forward its own independent demands and build its own organisations capable of defending them and the reforms of the government.