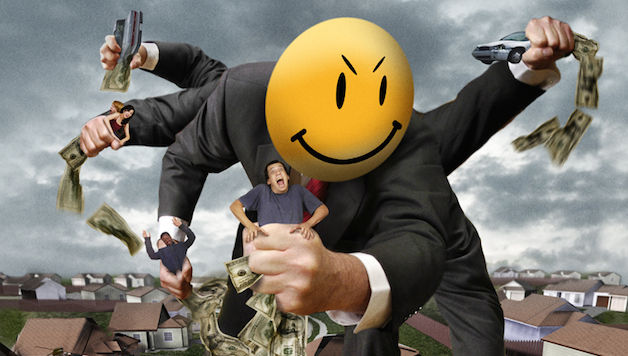 Is Capitalism to Blame, or is Wal-Mart Just Evil?

Wal-Mart: The High Cost of Low Prices is a new film by Robert Greenwald that exposes the brutal nature of the world’s largest corporation. In an indication of the intensifying anger at the corporate domination of U.S. society, of which Wal-Mart is the central symbol, hundreds of thousands of people flocked to libraries, union halls, and campuses to see the film in the first week of its release in November.

The film shows Wal-Mart doing what it does best: making huge profits while keeping its workers in poverty, driving small businesses into bankruptcy, exploiting workers in poor countries, and disregarding the environment. Wal-Mart’s strategy is based on ruthlessly cutting costs, allowing it to undersell its competitors and earn enormous profits.

As Jim Hightower put it: “Wal-Mart and the Waltons got to the top the old-fashioned way – by roughing people up. The corporate ethos emanating from the Bentonville headquarters dictated two guiding principles for all managers: extract the very last penny possible from human toil and squeeze the last dime from every supplier.” (CorpWatch.org)

The strategy has worked well for the owners of Wal-Mart, the Walton family, who now make up five of the top ten wealthiest Americans, with a combined fortune worth nearly $100 billion. While the Waltons all live on vast estates, Wal-Mart workers earn poverty wages and are forced to rely on food stamps, Section 8 housing, Medicaid, and other publicly-funded welfare provisions to take care of their families.

Wal-Mart is probably the fiercest anti-union company in the U.S., and even the slightest hint of an effort by workers to form a union is enough to warrant a call to the company’s 24-hour hotline and a visit from their anti-union “Rapid Response” team.

Nothing stands before Wal-Mart’s profits, not even the safety of its customers. Wal-Mart parking lots have been the scene of hundreds of crimes including murders and rapes, but Wal-Mart has refused to hire security guards to monitor their lots because it would cut into their profits.

Wal-Mart also shows nearly complete disregard for the environment. Like many other corporations, Wal-Mart often finds it more profitable to pay millions of dollars in fines for environmental damages and continue polluting, while also lobbying politicians to abolish environmental regulations.

The film provides a sharp indictment of Wal-Mart, but unfortunately it suffers from serious political shortcomings. The filmmaker tends to depict Wal-Mart as an “evil” corporation.

As Greenwald recently said, “Wal-Mart is abusive in ways that other corporations that are committed to profits are not. They have a culture that says it’s okay to do anything as long as it’s good for profits. It’s okay not to give employees health insurance. It’s okay to take money away from communities to build Wal-Marts. I don’t believe there is any other company that is as aggressively exploiting people as Wal-Mart” (Reuters, 2/12/06).

The makers of the film argue that the solution to Wal-Mart is more ethical, smaller scale American corporations that pay living wages and benefits. But as the film itself shows, it is companies like Wal-Mart that are the most successful, not “ethical” companies.

But the reality is that the system of capitalism, which is based on short-term profit maximization, forces companies to place profits above people and the environment. Wal-Mart has been so successful not because it is “evil” but because it has ruthlessly followed the logic of this system.

Wal-Mart’s success illustrates a basic law of capitalism – the inevitable tendency toward greater and greater concentrations of wealth and power, first predicted by Karl Marx over 150 years ago in The Communist Manifesto. Through competition, smaller companies tend to be driven out of business or bought out by their rivals until a few giant monopolies come to dominate the industry.

For example, whenever a new Wal-Mart bullies its way into town, the surrounding small retail outlets are squeezed out of business. They simply can’t match the low prices Wal-Mart achieves through its ruthless methods and global purchasing power. Wal-Mart has even used the tactic of moving into a small town, running the local stores out of business and cornering the local market and then either raising prices or relocating 10-20 miles outside of town to a cheaper location!

Retail is not the only industry in the U.S. to witness the growth of enormously powerful corporations in recent years. Industries like airlines, software, autos, and the media are now controlled by a few huge mega-corporations.

There is a growing movement against Wal-Mart, including communities fighting to prevent the opening of Wal-Marts in their town, lawsuits against sexism and labor law violations, and attempts to pass legislation to force the company to pay more towards healthcare for its workers.

While these are important efforts, history has shown that fundamental change does not happen by relying on the courts or politicians, which are beholden to giant corporations like Wal-Mart, but by building a mass movement of workers and the oppressed from below to challenge corporate power.

Such a mass movement can win important reforms, including unionization, higher pay, healthcare, and laws that bring more control over Wal-Mart. But as long as corporations continue to privately control the resources of society, they will attack the living conditions of working people at every opportunity, and use their vast resources to dominate the political system. They are forced to do so to compete with other corporations around the world.

There can be no “democracy” when the owners of Wal-Mart have so much power and wealth that they can completely warp the priorities of our society around their narrow need for private profit, dictating laws, diverting resources, reducing millions to poverty, and destroying our environment.

The only fundamental solution to this outrage is to take Wal-Mart out of the hands of the Walton family and instead bring it under public ownership and control. Only such a step could end the undemocratic power of Wal-Mart’s owners over society and allow society to democratically and rationally decide how to use our resources according to our needs.

But why stop at only one corporation? Don’t the inequities of Wal-Mart fundamentally apply to the rest of the giant corporations, like Microsoft, ExxonMobil, McDonalds, GM, etc, that lord over our economy and society? Wal-Mart may be extreme, but the same basic situation exists with all of Corporate America.

Rather than pointing in the direction of trying to reform or tame the corporate-dominated system of capitalism, as some argue, the case of Wal-Mart powerfully illustrates the need for a complete overturn of that system. Not just Wal-Mart, but all of the top 500 giant corporations that control the U.S. economy should be publicly owned and democratically controlled by the workers and consumers.

This would allow for a new, democratic system based on human needs – socialism. Rather than a race to the bottom among workers in the U.S. and around the world so that a handful of huge multinational corporations can rake in profits, under socialism the resources of society could be harnessed to raise the living standards of ordinary people all over the world, to make possible a new, truly human culture of solidarity and cooperation.

In The Next Issue of Justice…
Wal-Mart: Corporate Sexism

Wal-Mart is the largest employer of women in the U.S. Hundreds of thousands of women work under brutal conditions in sweatshops around the world, producing the goods on Wal-Mart’s shelves. Read more about how Wal-Mart systematically exploits women in our next issue.

Why Does It Cost So Much To Be Alive?