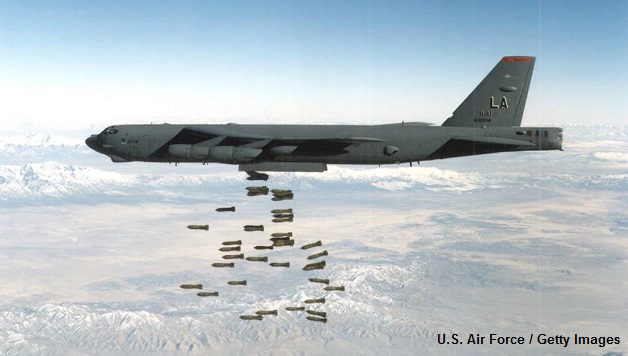 U.S. threats against Iran have reached screaming pitch, as the country’s nuclear programme has been referred to the UN Security Council.

In a barely concealed threat of military action, Vice-President Dick Cheney warned: The U.S. is keeping all its options on the table in addressing the irresponsible conduct of the regime, Addressing a meeting of the American Israel Public Affairs Committee, he said: We will not allow Iran to have a nuclear weapon.

More crudely, John Bolton, U.S. envoy to the United Nations, told visiting British MPs: We can hit different points along the line. You only have to take out one part of the nuclear operations to take the whole thing down.

The head of the Iranian delegation to the IAEA, Javad Vaeidi, responded with similar language: The U.S. may have the power to cause harm and pain, but it is also susceptible to harm and pain. So if the U.S. wishes to choose that path, let the ball roll.

Whether the U.S. will actually carry out an attack, however, is a different matter. A U.S. ground invasion is impossible. U.S. forces are already seriously over-stretched in the Iraq quagmire, and could not take on an angry nation of 70 million.

Given the reckless stupidity of Bush and the neo-con hawks, an air-strike against some of Iran’s key nuclear facilities cannot be completely ruled out. Even they, however, as short-sighted as they are, will be forced to think twice before launching such an adventure.

Militarily and politically, the Bush regime is in a much weaker position than before the invasion of Iraq. The catastrophic situation in Iraq has demonstrated the limits of U.S. imperialisms power.

Attacking Iran would have explosive repercussions throughout the Middle East and around the world. It would rebound on U.S. imperialism, even more savagely than the invasion of Iraq.

A U.S. military assault on Iran’s independence and terrible collateral damage to innocent civilians and the social fabric would provoke even more intense mass anger against U.S. imperialism. The Iranian regime, with strengthened popular support, would retaliate with a vengeance.

The U.S. position in Iraq is already disastrous. But Iranian leaders could make it even more bloody and costly for the U.S. The U.S.-British occupation depends on the acquiescence of the main Shia parties. Their leaders follow the advice of the ayatollah Sistani, who is close to the Tehran regime.

An intensive offensive by Shia forces against the occupying forces could force the U.S. to beat a humiliating retreat, hiding in their bases or evacuating from the country much sooner than Bush and company are reckoning on.

Through pro-Iranian, Shia movements like Hezbollah in Lebanon and Hamas in Israeli-occupied territories, Tehran could create mayhem throughout the whole region. A U.S. attack on Iran would detonate a shock-wave of anger throughout the Muslim and Arab world against western imperialism. That could result in another spate of individual terror attacks in the U.S. and Western Europe. The survival of pro-U.S. regimes, like Hosni Mubarak in Egypt and the monarchy in Saudi Arabia, would be threatened.

Then there is the oil weapon. Iran is the worlds fourth largest oil producer. Currently, world oil supplies can barely meet global demand, and prices have been hovering around $60 or $70 a barrel for many months. If Tehran turned off the tap or even restricted supply for a period, it could deliver a mighty shock to the world economy. A super spike in the price of oil  $100 a barrel or more – could send world financial markets into a tail spin and trigger a severe economic downturn.

But perhaps Bush, Cheney and their White House cronies are too blind to see all this? Are they are so reckless, so desperate to re-assert U.S. power, that they are determined to strike at the Iranian regime regardless of the consequences?

Electoral calculations are also a factor. Bush needs to salvage his image as a tough war-time president and commander-in-chief. In the U.S. and around the world, many undoubtedly believe Bush is preparing to bomb Iran. Unfortunately, it cannot be completely ruled out.

Even Bush, however, has been chastened by the fallout from Iraq. Many world leaders who supported Bush in 2003 have been forced to admit the Iraqi adventure as a costly mistake. The same applies to many U.S. politicians, who fear that the overwhelming domestic opposition to the war will cost them their seats in upcoming elections.

The U.S. ruling class fears the consequences of another military adventure by Bush and the neo-cons. An editorial in their leading paper, the New York Times (9 March), called on Bush to face the facts on Iran. American policies in the Middle east have made Iran incalculably more powerful than it was before the invasion of Iraq, while virtually eliminating any room for manoeuvring when it comes to deploying the U.S. military.

Bush has sternly swatted down a compromise on Iran proposed by Russia: Unfortunately, the depressing truth is that the United States has very few other options when it comes to making Iran stop working on projects that could lead to nuclear weapons, and Iran knows it.

While Cheney, Bolton and others are hurling treats of military action, other U.S. representatives are still speaking the language of diplomacy. We have not abandoned hopes for a diplomatic solution, said Greg Schulte, US rep to the IAEA: This new phase of diplomacy is intended more forcefully to convince Iran to turn back from its nuclear weapons program (Washington Post 9 March).

Even the secretary of state, Condoleezza Rice, ruled out pushing for UN sanctions as against Iran as a first step (New York Times 8 March). Iran’s IAEA rep, Javad Vaeidi, attacked Washington as warmongering but added: We keep the doors open for negotiation and resolving the issue.

Both U.S. and Iranian leaders are playing a dangerous game of bluff and counter-bluff. If it spirals out of control, it will be the workers and toiling people of Iran who will pay the heaviest price. But workers everywhere would suffer from the terrible fallout.

March 18 demonstrations around the world will be demanding that imperialist forces get out of Iraq. But opposition to any U.S. attack on Iran will be an urgent theme in this years third-anniversary protests.