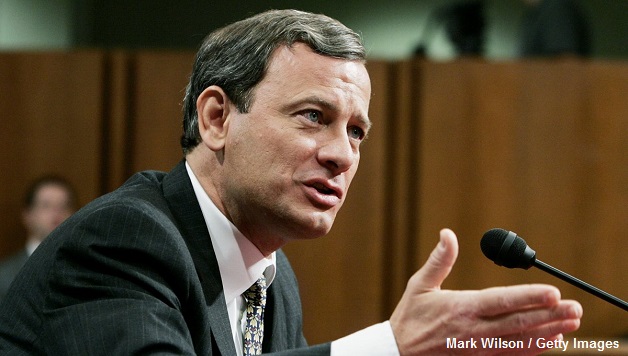 “In John G. Roberts Jr., many of the corporate chieftains who helped put President Bush in the White House see a Supreme Court nominee with whom they can do business,” wrote Paul Adams. “That’s partly because so many of them already have” (Baltimore Sun 22 July 2005).

As a corporate lawyer, Roberts fought to destroy the Americans with Disabilities Act, which protects the rights of workers injured over time due to their jobs, and supported big business’ use of criminal contempt fines to defeat strikes.

During the recount in 2000, he traveled to Florida to help devise George W. Bush’s legal strategy for stealing the White House by defending the disenfranchisement of thousands of Black voters.

As a Federal Court judge, Roberts argued for limitations on congressional authority to regulate corporations, which would threaten environmental protections, workers’ rights, and anti-discrimination laws.

He also upheld the handcuffing, arrest, and booking of a 12-year-old African American girl for eating a single french fry in the Washington, D.C. subway system.

In one of his most recent decisions, Roberts ruled “enemy combatants” at Guantánamo Bay, Cuba, can be tried by “military commissions” set up by the Bush administration, denying them the right to due process and a fair trial.

As deputy solicitor general for Bush Sr., Roberts wrote the “gag” rule policy that barred federally-funded clinics from even mentioning the word “abortion” to their patients.

Recently released memos from his time in the Reagan administration showed that Roberts argued against saying AIDS couldn’t be transmitted through casual contact. He also advocated a national ID card to stop “the real threat to our social fabric posed by uncontrolled immigration.”