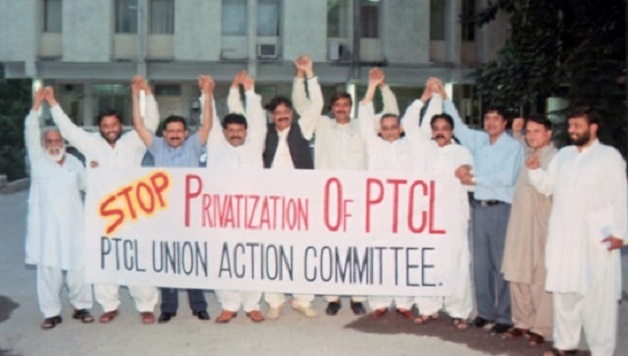 Socialist Movement Pakistan (Pakistani section of the CWI) played a leading role in a strike of 61,000 Pakistani telecommunications workers. These workers went on strike at the end of May against the Musharraf government’s privatization and downsizing plans.

This gigantic and embittered battle led to 6,000 workers occupying the telecommunications company’s headquarters in Islamabad. On June 4, due to the militant tactics of the workers, management temporarily backed down on its proposal to eliminate 50% of the workforce.

The CWI led protests in support of the Pakistani telecommunications workers all around the world, including an occupation of the Pakistani consulate in Scotland. Socialist Party (CWI Ireland) TD Joe Higgins publicized the strike on the floor of the Irish Parliament. Many jailed trade unionists were released due to these efforts.

The strike was partially successful in winning gains for the workers; however, the issue of opposing privatization continues to be important to Pakistani workers. Socialist Movement Pakistan initiated a conference against privatization on June 16. Hopefully, this will be the start of a powerful national anti-privatization alliance.