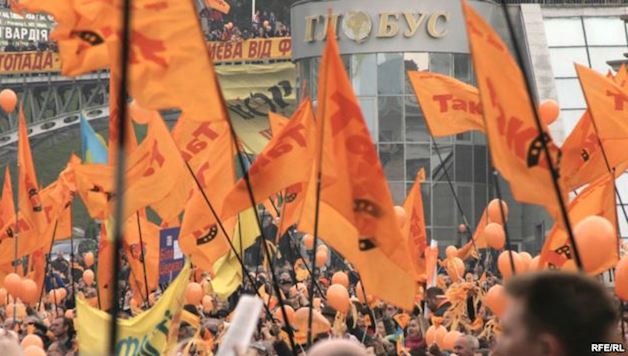 Last November/December, huge opposition protests took place in Ukraine against the official results of the country’s second round presidential elections. The so-called ‘Orange Revolution’ was led by Victor Yushchenko, the pro-Western presidential candidate, against the November “winner”, Victor Yanukovich, who was backed by the Russian government.

The mass movement in the Ukrainian-speaking, eastern part of the country, forced new elections, on 26 December. On 11 January, the Electoral Commission announced that Yushchenko won, with 51.99%, against 44.2% for Yanukovich. Yanukovich contested the results in the courts – alleging, for example, that many pensioners were not allowed to vote on 26 December – but his case failed. On 20 January, the Supreme Court upheld Yuschenko’s victory, clearing the way for his inauguration as president. It is expected this will take place over the next few days.

But what does Yuschenko’s victory represent? What was the ‘Orange Revolution’?

Niall Mulholland visited Ukraine’s capital, Kiev, during the protests and met socialists, opposition activists and trade unionists, from the east and west. He spoke to socialistworld.net:

“The first protests were huge, with up to half a million marching in the centre of Kiev. People were outraged that the second round elections were rigged in favour of Yanukovich, who rested on the super rich individuals that have enormous power – the oligarchs – in the industrialised east of the country, and had open support from Putin. After a decade of disastrous capitalism, the Kiev protesters were fighting against attacks on democratic rights, corruption and poverty.

“There was a huge thirst for political discussion, with thousands of people turning up nightly to Kiev city centre after work. The biggest demonstrations involved many workers, as well as students and middle class people. But workers were not there in an organised way – there are few independent unions in Ukraine.

“Miners and other workers were bussed in by Yanukovich to protest against pro- Yushchenko demonstrators. Very often when they met, however, both sides found out that they had more in common with each other than with the different ruling class factions trying to manipulate them.

“Unfortunately, the leadership of the ‘Orange Revolution’ was dominated by Yushchenko and his main ally, Tymoschenko, who has worked with far right, Ukrainian nationalists, and fascists. The half-mile long ‘tent city’, set up in the heart of Kiev, was controlled by people in paramilitary uniforms. The main opposition student organisation, ‘PORA’, was created with US funds, and its leadership is right wing. Yet there are many students genuinely searching for a radial alternative.

“Many protesters told me that they understood that Yuschenko drew support and funding from US imperialism and other Western powers, which have their own strategic and economic interests in the region. But they joined the protests to show that, “Enough is enough!’ Importantly, many protesters vowed that they would return to the streets if Yuschenko, a right wing, pro-market politician, does not dramatically raise their living standards – which, of course, he will not do.

“Both Yushchenko and Yanukovich played the ‘national card’. Yushchenko visited the predominantly Russian-speaking Crimea, in the far south, last summer, and openly sided with leaders from the Tartar minority. Yanukovich whipped up Russian nationalism in the east, where local leaders threatened to hold referendums on ‘autonomous rule’.

“These cynical, reactionary policies threatened to split the country into two and to provoke a civil war. But it was clear from the comments of activists from the east, west and Crimea that working people resisted this course.

“A new Yushchenko regime will most likely soon come into conflict with workers and youth in the industrialised east and will also bitterly disappoint those in the west, who are desperately looking for EU-style living standards. This gives the workers’ movement a great opportunity to build a powerful force, but only if it rejects all ruling elite factions, outside capitalist powers, and reactionary nationalism, and stands on independent, socialist policies, guaranteeing full rights to minorities.”