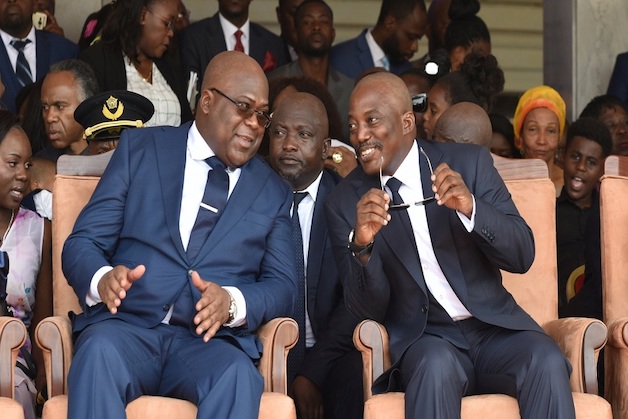 The presidential and legislative elections in the Democratic Republic of the Congo (DRC), which were supposed to be held in 2016, finally took place on December 30th 2018. As suggested by the title in a recent edition of the Lutte Socialiste, “The departure of Kabila is not enough to bring real change”. Our assessment, however, turned out to be an understatement. Kabila has left but is still there.

Kabila is not really gone, how to clear away his political system?

The Independent National Electoral Commission (Commission Électorale Nationale Indépendante or CENI) which organized the elections has proclaimed the results. Corneille Nangaa and his team, all partisan to the Kabila-system, have announced Félix Tshisekedi as the winner of the presidential election, with 38.57% of the vote. Tshisekedi heads the Union for Democracy and Social Progress (UDPS), a party with observer status in the “socialist international,” and was supported by the coalition ‘Cap pour le Changement’ (Catch). According to Nangaa, Martin Fayulu, candidate of the stillborn united opposition coalition, ‘Lamuka’, would have gotten 34.8%. Martin Fayulu is not a neophyte in Congolese politics. After a career in the oil sector in the USA, he has been involved in Congolese politics since 1990. He is the typical example of the comprador bourgeois turned towards Western interests. He was appointed for less than 24 hours as the sole opposition candidate.

The results of the legislative elections were announced a few days later. The pro-Kabila presidential majority came out ahead with 350 representatives for the Common Front for Congo (Front Commun pour le Congo – FCC). The ‘Catch’ obtained 48 seats and ‘Lamuka’ 80 seats. To describe the situation, some commentators have talked about a cohabitation, where the president would reign but would not govern.

These results have immediately aroused criticisms from all sides. For us, these results reflect an arrangement between the current power and the UDPS of Tshisekedi. The latter has been in a tight spot since turning his back on efforts to unite the opposition behind a single presidential candidate. Given the dynamic of the campaign and the claims of various organizations (National Episcopal Conference of Congo [CENCO], Lucha (‘Struggle for change’ – a ‘citizen movement’), press groups, and international institutions) which had observers in polling stations throughout the country, it is most likely that the presidential elections were in fact won by Martin Fayulu.

There have been numerous calls for a recount by the Southern African Development Community (SADC), the International Conference on the Great Lakes Region (ICGLR), the United States, the European Union, Belgium, Human Rights Watch (HRW), the CENCO, etc. However, the CENI has been categorical; accept the results or Kabila stays in power.

The publication of the results was judged a delicate matter by the current government. The military and police presence was reinforced in the cities, and internet connections were cut, so as to contain any post-electoral mobilizations. Confrontations with security forces nevertheless occurred in different regions, notably in Kikwit. Upon writing these lines, the death toll amounted to 20 people killed. The future is uncertain.

Several scenarios are possible. The ‘Kabilie’ will choose its preferred scenario depending on the amount of leeway it will possess. The elections were not organized in 3 constituencies (Béni, Butembo and Yumbi) which mean that the new president was not elected by universal suffrage. This could be taken as grounds for annulling the results of the elections. Likewise, Félix Tshisekedi’s candidature was tainted by the fact that fake documents were used for the application. If the president elect were to be “hindered,” it is possible that Kabila, as senator for life, could “come back through the window,” being returned to power through the presidency of the senate. In case of annulment, new elections would need to be organized. The danger of a civil war can also not be ignored.

Martin Fayulu, considered the winner by all observers, has contested the results by bringing the matter before the Constitutional Court. However, given that the latter was set up by Kabila and his entourage, there is little chance that it should change its allegiance.

All the scenarios include an unknown factor; the reaction of the workers, the youths, the peasants and the impoverished masses. The entire electoral process has been designed to avoid control by the majority of society. The state institutions do not defend the population. They serve a parasitic minority which enriches itself, scrapping up the crumbs left by global capitalist exchanges.

The state is not neutral

In 2006, after almost ten years of civil war and six million dead, the country was bled dry and the people wanted a president elected by universal suffrage. During the 2006 presidential elections, Kabila was at the height of his popularity and won the elections. This last decade under Kabila has taught us that it is necessary to link democratic demands to the necessity of leaving the system. Under capitalism, a great part of the produced wealth is sold by a local bourgeoisie and benefits large international corporations. In fact, the two types of demands, democratic and economic, are intimately linked. The entire history of universal suffrage shows us that it is only when the capitalists fear losing the ownership of the means of production that they make democratic and economic concessions.

Many commentators are making pleas for calm and respect of the institutions. Fayulu filled an appeal at the constitutional court. Many call for a recount of the votes. For us, the state is not an agent above the fray, it is not neutral. This is also in advanced capitalist countries, where the state defends the social minority which exploits the majority. Nevertheless, in these countries the working class has obtained, through great struggles, some democratic and social rights. This can provide the state with a wider social base. This being said, the state sometimes saves the capitalists from themselves. Yet, as soon as a major social conflict occurs, the class character of the state resurfaces. For an example, of this one needs to look no further than how the ‘yellow vest’ movement is being treated by the institutions of the French state.

As revolutionary Marxists, we think that to trust the state today only perpetuates the politics of Kabila and his world. As a matter of fact, since Kabila has had to concede the holding of elections, he and his camp have done everything to preserve the structures of enrichment established on the backs of the Congolese people.

For a collective struggle by the masses to take power

By taking advantage of the contradictions between Congolese parties and political coalitions, Kabila has managed to regain a foothold inside the country. He likewise passed several military cooperation agreements with Russia so as to obtain external support.

To play on this contradiction, it is necessary to amplify and broaden the protest and strike movement that started from the public sector unions. Linking social issues to democratic issues, by demanding the right to build independent unions that can act with the best methods of the workers movement: mass general assembly, demonstrations, strike, blockades and the setting up of struggle committees.

The setting up of a party which defends the interests of the majority in society would be an important step. Such a party can be a place where experiences are exchanged and discussions are held on the next steps to take in the struggle. The question of the need to have the objective of a workers’ and poor peoples’ government must be posed from the start, so as not to depend on politicians whom one already knows to be corrupt and who defend the interests of the capitalists. Fayulu is a former oil company executive, supported by historical opposition figures Jean-Pierre Bemba (former Vice-President between 2003 and 2006; recently dismissed for his conviction by the ICC for bribery of witnesses) and Moïse Katumbi (one of the richest Congolese, president of the TP Mazembe football club; and until 2015, he was a member of Kabila’s party, the PPRD, and Governor of Katanga Province). These people have been in government in the past and have defended policies which do not reflect the interests of the majority.

A call for fresh elections needs to be made. Such a call needs to be accompanied by the formation of popular committees in each constituency. Elected representatives from these committees could then control the electoral process and defend the population from possible repression.

Only the collective struggle of the masses for power can assure that economic and democratic demands are realized. Since independence these demands have always been impeded by the capitalist system of production and its search for profit in the region. The current situation in the Congo and in Africa illustrates that capitalism does not bring democracy and social progress. We need to build a socialist society where the wealth is produced and distributed in a planned and democratic manner.