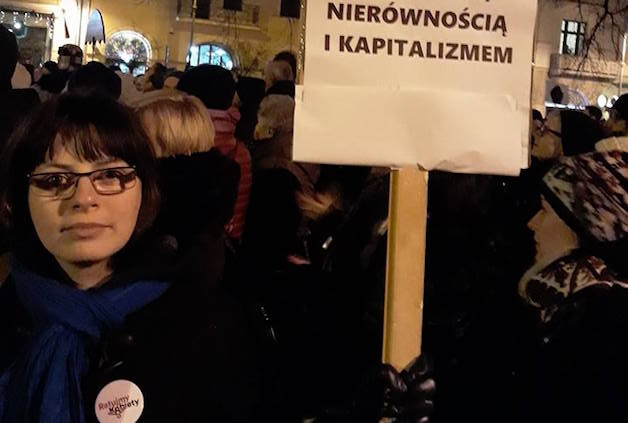 On October 3, 2016, the Polish government’s attempt at a total ban on abortion provoked a “women’s strike” with up to 120,000 demonstrators in the streets of Polish cities. This event inspired women’s rights activists in the U.S. who took up the idea as part of the anti-Trump resistance. It also kicked off a wider women’s struggle in Poland itself. Socialist Alternative member REBEKAH LIEBERMANN spoke to TIPHAINE SOYEZ from Alternatywa Socjalistyczna (CWI in Poland) about the strike, the wider struggle for women’s rights in Poland, and the lessons for the women’s rights movement in the United States.

RL: Can you tell us a bit about the ban on abortion and why it sparked so much anger?

TS: The thing is, in Poland, we had this tiny period in which abortion was a right in cases of rape, incest, damaged fetus, health reasons for the woman, or social reasons. So, in fact, it meant you could get an abortion on demand, because “social reasons” can be anything.

But in 1993, as capitalism was coming back in Poland, the capitalists used the influence of the Catholic Church to impose their ideology. And for that they had to pay a debt to the church by restricting abortion rights to rape and incest, damaged fetus, or health for the woman. In this time, in fact, it was not even a majority of the population who agreed with that, it was really a decision taken by the head of state because it was needed at the moment for their political games. But nowadays, according to a recent poll, we have 40% who are for abortion on demand.

There are often cases like a woman who had a damaged fetus, and the doctor refused to abort it. When the baby was born he could only live for two days, and the doctors could do nothing but inject morphine in him so he wouldn’t suffer so much, but he was in real, terrible pain. So how is that protecting life? And there was also a case of a 14-year-old who was pregnant after rape, and when she went to the hospital, instead of allowing her to have an abortion, they made her speak with a priest. So that’s also something that angers women so much, that even the very restricted rights we have now are not respected. And this was before the government proposed its total ban on abortion.

And, of course, there are also all the other aspects of women’s issues in Poland, like the absence of sexual education in schools. Contraception can be refused by doctors too. And, on the other hand, once you have a child, you have difficulties raising them because all of the cuts to kindergartens, because of low wages and unemployment, and because there is widespread poverty.

I think thatthis anger, is directed both at the way the state is patronizing women, while at the same time women don’t actually have the ability to live their life as.

RL: The woman’s strike in Poland took inspiration from a similar strike in Iceland in 1975. Can you tell us more about the Icelandic strike and what the Polish strikers took from that?

TS: About the Icelandic strike, it was a strike about the wage gap between men and women. And women were called, for one day, to stop all work, to not only leave their paid jobs, but also to not do housework, and to join a big demonstration in Reykjavik. 25,000 people gathered, which was amazing proportionately to the Icelandic population.

I don’t know exactly how it got on the agenda in Poland, but it was a very good idea to organize a strike. In Poland, there was not really a call to not do housework. It was more to walk out of the workplace and to strike.

RL: Why do think the strike had the impact it did in forcing the government to back down?

TS: Because it frightens the government much more than a demonstration, because it brings back the idea of stopping your economic role, and actually challenging the capitalist system. Even if it was not a traditional strike , because women  were not walking out of  the workplaces and actually shutting them down. But the fact that they brought the idea of striking into the discussion put an amazing pressure on the government actually. And I think it’s also because the government fears that it could give an idea to the working class as a whole.

RL: How were the conservatives able to get away with their attacks on women for so long? And why weren’t progressive or left forces able to grant wider-ranging abortion rights like in other parts of Europe?

TS: The thing is that, in Poland, our Social Democratic Party is thoroughly compromised. They don’t even have seats in parliament now because, when they were in power, they carried through neoliberal policies of privatization and destroying all the state welfare that was inherited from the Stalinist times (while they are the remains of the Stalinist party, in fact). And the real left in Poland was underground throughout the Stalinist times and, since the 1990s, it’s only rebuilding, while there is all this capitalist backlash and ideology. So the left in Poland is very weak.

So basically we have the choice between liberals and conservatives. And for the majority of people who are not reached by left ideas, there is nothing to do but choose between neoliberals who they know will totally destroy their work conditions, lower their wages, and bring more misery, but who at the same time will support, to some extent, women’s rights and LGBTQ rights, or the conservatives who promise some social reforms while at the same time being very reactionary.

The conservatives did things like securing better work contracts, and giving child benefits for the very first time in Poland. The working class actually voted for them for survival reasons. I heard some of my friends saying “I’m on the left, but I voted for the conservatives, because they propose social reforms.” So I think there is not yet the consciousness in Poland of a left that can fight on both issues, economic demands and democratic rights for oppressed people such as women and LGBTQ people. And this is what we have to rebuild in this society.

RL: What are the left and the organizers of the movement doing to change consciousness? Are they fighting for full abortion rights or just defending the 1993 law? What is the consciousness within the movement?

TS: Actually, at the demonstration, we saw a lot of placards saying “My body, my choice,” “Abortion on demand,” and so on. Really radical things. And I don’t think the people who were there were there to support the 1993 law. They were there because they want women’s rights. But the official demands were limited to defending the 1993 law, so it seemed like an agreement from the leaders of the protest movement to not go beyond this very limited law.

And the fact that the protest leaders stopped right after the government’s retreat on the total abortion ban gave the conservatives the space for a backlash against women, and now they have put more restrictions on the morning-after pill, which will now only be delivered with a prescription. And I think they did that in a test to see how far they can go in attacking women’s rights before they put a new ban law on the table. So the fact that the demonstrations didn’t go further was a gift to the conservatives.

RL: What do you think it would take to win full abortion rights in Poland?

TS: I think that the idea of continuing the struggle and, for example doing a one day strike every week, would be a great idea. But the problem is that the women who have gone on strike are facing repression later. Such as being threatened with losing their job, or, on a local level, like their families being ostracized from the community, and even to be threatened that their children will be taken away by Social Services. And I think an important point is that to walk out of  your job to go to a demonstration is something very bold to do for your cause. So to do that, you need to be sure that there are people around you so that you will be strong enough altogether to protect yourselves against these attacks. And, for that, you need the trade unions to take up the issue.

The unions have managed to confront this law in the past, but they cannot actually call a strike against the abortion ban because it has nothing to do with their workplaces. But what the union could do is to make propaganda among their members to mobilize for the strike for women to go together from the workplace to the demonstration. They could also mobilize male workers in solidarity. And also mobilize to defend women who are being targeted for their political action in the strike. And I think that if the campaign had gone further, we could have countered the “pro-life” propaganda and convinced more women that abortion rights are a need.

RL: What is the key lesson from the movement for those of us fighting for women’s rights in the United States?

TS: I would say that you can see that there’s an opportunity for very massive movements on women’s rights, that can make a government afraid. But, that it’s not enough in itself to actually gain something. For that we need to have a proper direction to the movement, to express the demands of the people, and to link it with economic questions, and to propose a real strategy. So we have to fight the compromise politicians who use this movement only to serve their own political interests.