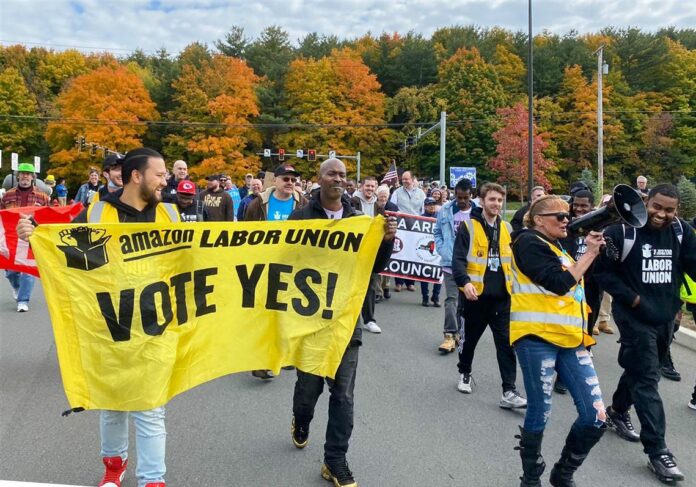 When Jeff Bezos saw that workers at the ALB1 fulfillment center voted 406 to 206 against the union, there is no doubt he breathed a sigh of relief. After all, Amazon seems like a tinderbox right now, and a victory at ALB1 could have spread like wildfire.

In late September, Amazon workers already dealing with inflation were outraged to learn their annual holiday “peak pay” would be reduced, which was followed by the announcement of an insultingly low raise of $1 an hour or less. Then three fires at separate warehouses highlighted Amazon’s abysmal safety record. After that, workers at five separate facilities organized small walkouts over a second Prime Day this year.

Amazon Labor Union (ALU), the union behind the historic victory at the JFK8 warehouse, is now at a critical crossroads. ALU’s victory at JFK8 was stunning.  More than a fifth of all workers who joined all unions over the previous twelve months were JFK8 workers. Then, a few weeks later ALU suffered a crushing defeat at the neighboring LDJ5 warehouse. Since then, Amazon has ramped up its illegal firing of union activists, culminating in their suspension of 80 workers who took workplace action demanding  pay after being sent home following a fire in the warehouse.

ALU still has major opportunities to grow. Workers at the ONT8 fulfillment center in southern California recently filed for a union election with ALU. In August, ALU tweeted that it was collecting cards at the EWR9 warehouse in New Jersey. There are undoubtedly more initiatives like this in the works. However, these new campaigns will now need to confront the question of why workers like themselves at ALB1 and LDJ5 voted against joining the Amazon Labor Union.

Amazon is well aware of the polls that show 71% of workers support unions. The only way Amazon can win is to lie, manipulate, and intimidate workers to vote against their own interests. In Alabama, Amazon installed an illegal postal box and encouraged workers to mail their union ballots from it. If Amazon truly believed their own propaganda that unions only want dues and won’t help workers, they wouldn’t need to pay outside consultants $3,200 a day to bust the union at ALB1.

They will tell workers that the union does not know what to fight for, which is why emphasizing clear and consistent demands is so important. At JFK8, workers approached other workers leading with “Do you support ALU? We’re fighting for a $30/hr starting wage.” The union also needs to be unapologetic about dues. At JFK8, workers used the slogan “no dues without a contract.” At ALB1, however, the union’s message to workers was nowhere near as consistent. Without having a clear and consistent answer about dues, workers didn’t know that dues collection is a democratic discussion among all those in the union and that any raise in dues wouldn’t happen without their input.

Amazon also busts unions by firing workers. Almost the second the ALB1 campaign went public, Amazon decided to start rigidly enforcing its UPT system that allows workers flexible time off, leading to one of the central figures of the union drive getting fired right away. In other cases, they illegally fired union organizers. While the union did help organize financial and legal support to defend these workers, these efforts did nothing to stop Amazon’s bullying in the first place.

Amazon has ramped up an illegal firing spree at JFK8, which started before the union election, but has continued afterward, now reaching central members of the JFK8 union drive like Pasquale “Pat” Cioffi and Jordan Flowers, who is waiting for a kidney transplant. Earlier this month when a fire shut down JFK8, hundreds of workers confronted managers on the shopfloor demanding pay (many workers commute more than two hours). In response, Amazon suspended 80 of them.

Amazon Must Be Confronted on the Shop Floor – Not The Courts

Amazon regularly breaks the law because they are betting that by the time their case is heard by the National Labor Relations Board (NLRB), the momentum for the union would already be lost. Other corporations act the same way. It took eight months for the “Memphis 7“ at Starbucks to finally get their jobs back, and during that time an additional 100 workers were fired.

Amazon won’t be unionized without marches on bullying bosses, walkouts against unsafe conditions, and strikes to win a contract. There is a small, but growing layer of Amazon workers who are organizing strikes and walkouts as a means to circumvent the official NLRB process for forming a union. Warehouse workers at Buford, GA, Atlanta, GA, Joliet, IL, and Amazon Air workers in San Bernardino, CA organized small walkouts during a second “Prime Day” on October 11th demanding higher wages.

However, these protests are essentially sickouts, based on using Amazon’s Unpaid Personal Time (UPT) to walk off the job. Because of this, they have limits. If the walkouts grow to a point where they threaten production, Amazon would undoubtedly crack down on this loophole in their UPT system. While these protests can play a crucial role in popularizing direct action at Amazon, they are no substitute for systematically organizing majority support behind a walkout in the event of retaliation, or a strike in the event of Amazon refusing to negotiate a union contract.

While individual organizers with ALU have become nationally recognized figures in the labor movement, ALU won at JFK8 because they built a strong organizing committee of dedicated workers, which met regularly to democratically plan all aspects of the campaign, develop clear demands, and confront Amazon’s lies on the shop floor. The JFK8 organizing committee included workers from all racial, ethnic, and national backgrounds at the facility. This team of workers was well represented in social media and in the early press coverage of the JFK8 victory.

At ALB1 workers and their issues should have been featured more on social media and given more prominence than high-profile New York city organizers. There is nothing wrong with highlighting that ALU represents a key part of a growing national (and international) movement of Amazon workers – but, it’s essential that the union drive emphasizes team leaders who can represent the whole workforce at ALB1. Amazon’s union-busting already emphasizes the union as an “outside force”, and developing the public profile of a wider layer of ALB1 activists would’ve been essential in contradicting this.

A strong organizing committee also undercuts Amazon’s attempts to make the election about the personalities of individual workers. At LDJ5, Amazon spread a rumor that ALU president Chris Smalls bought a new sports car with union money, then they mailed propaganda to every worker with the slogan “you can’t test drive the union” and “ALU” written across a cartoon car, a dog whistle reference to their own baseless lie. At ALB1, Amazon went even further by trying to make the election about whether workers can trust Chris Smalls, and other leading ALU organizers at the facility.

Spread the Movement Nationally Based on the Correct Tactics

There is enough anger and frustration among Amazon workers to unionize Amazon. ALU can play a decisive role in this process by using their authority from the JFK8 victory to promote the methods they used to win:

✪ The importance of having clear strong demands, like a $30/hr base pay, volunteer overtime instead of MET, ending Time Off Task, and more.

✪ The need to have a united, democratic Organizing Committee of workers that act collectively and represent every shift, department and ethnic and linguistic group.

✪ The need to be unapologetic about the difference between workers and the boss, highlighting the obscene wealth of mega-billionaires like Jeff Bezos and confronting management in the anti-union meetings.

Unfortunately ALU is sending the wrong message to workers at other facilities. For example, ALU’s “Steps to Power” guide in the JFK8 section of their website marks collecting 30% of union cards as the first step towards organizing a union, rather than starting with a solid organizing committee. It emphasizes developing a legal strategy while not mentioning direct actions like walkouts, which undoubtedly built union momentum at the JFK8 warehouse. It explains voting on a Tentative Agreement without mentioning that striking might be necessary to even get Amazon to start negotiating. Seven months after their victory, JFK8 itself isn’t even formally certified yet because of Amazon’s legal challenges.

This has led to a series of disastrous defeats at LDJ5 and ALB1, and has left JFK8 workers unprepared to defend against Amazon’s union busting. However, the fight is far from over. Unions like the Teamsters, who in words have declared war on Amazon and who have infinitely more resources than ALU, need to jump into the fight. Unionized workers at UPS and the USPS handle a third of Amazon’s deliveries, and if ALU calls a strike to force Amazon to the table, these workers can “refuse to cross the picket lines” in the form of refusing to deliver packages that fuel Bezos’ profit making machine. Wider protests in coordination with striking workers and with solidarity actions from the broader labor movement can gum up the few lanes of road that most of Amazon’s goods travel past.

The defeat at ALB1 is a powerful blow to ALU and is a setback for Amazon workers everywhere. JFK8 workers seem more isolated than ever, facing increased attacks from Amazon with no clear way to win a contract. Worker struggle at Amazon is picking up momentum, and the widespread outrage of Amazon’s stingy “peak pay” cuts show the situation is a powderkeg. A victory for CAUSE in North Carolina, or workers at another facility, could lead to generalized struggle.

However, the fight to #UnionizeAmazon will come down to the correct tactics and strategy. This is why Socialist Alternative members who work at Amazon are hosting a national organizing call on November 3rd at 7:00pm Eastern Time. Amazon workers should register here, and help spread the word.