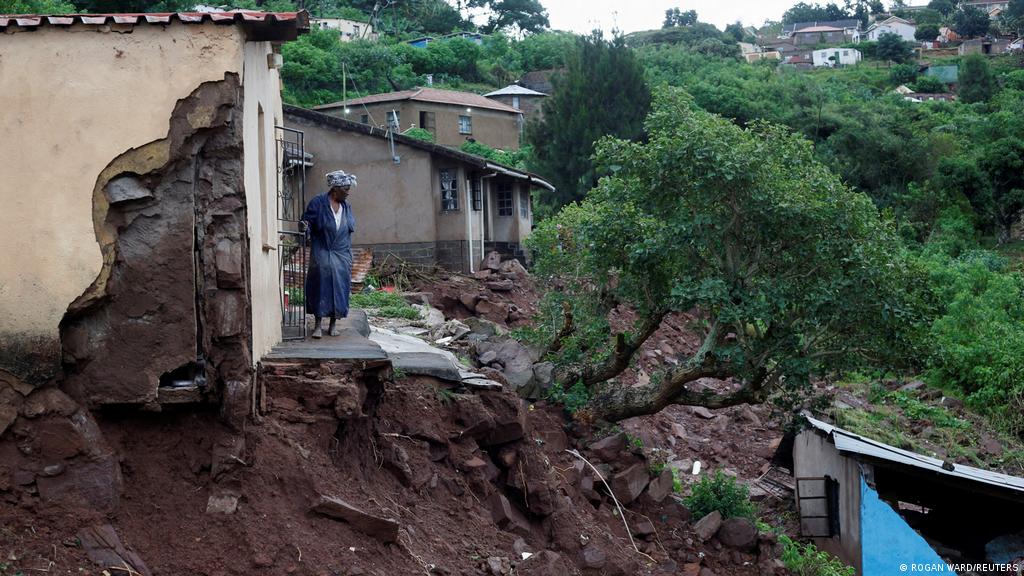 On April 11, the worst floods ever recorded in Southern Africa hit the eastern coastal region. More than 430 people are dead, and over 7000 people are without a home. The Tongaat region on the north coast of the KwaZulu-Natal province has been without water supply for more than a month, and the government estimates the damage to infrastructure in KZN alone at 17 billion rands (USD $1.1 billion). In the Eastern Cape, hundreds of millions of rands in damage has so far been documented in losses of crops and livestock. While still reeling from this, KZN was hit with another extreme rainfall on May 21, adding even more death, displacement and destruction. Climate scientists across the world have warned about extreme weather events increasing in both frequency and intensity.

To a certain extent, natural disasters like floods and droughts, landslides, and earthquakes, are inevitable. And in general, these events alone do not kill people — it is capitalism that fuels these disasters to be more extreme, that forces the working class and poor to live in dangerous buildings and areas, and that drives up the death tolls of these events. Science is advanced enough to predict many disasters and the risk associated with living in certain areas. But under capitalism, the risk posed to human life is not as important as the risk to profit. People settle on dangerous land at risk of floods or landslides because they have nowhere else to go, and due to austerity there is no plan to either resettle people in safer areas, or to ensure homes can withstand the natural disasters.

On a national scale in South Africa, infrastructure spending has decreased by an alarming 82 billion rands (USD $5.3 billion) since 2016. This represents a decrease of 29%, in the context of a growing population and deteriorating infrastructure. Between 2019 and 2020 electricity infrastructure spending was cut by 11 billion rands, and 200 million rands less was spent on residential houses. The ongoing budget cuts to the healthcare sector will also be sorely felt in the near future, as floods are known to carry severe health impacts — physical injuries, but also spread of infections, not to mention the psychological impact of experiencing these devastating events that destroy lives and communities.

While the African National Congress in KZN has been accused of looting relief supplies and the national government failed to release disaster relief funds more than a month after the first floods, organizing of relief efforts has been taken up by communities, nonprofits, and the private sector. The ways in which these on-the-ground efforts have been organized provide a glimpse of the kind of organizing we need all the time to deal with, rebuild, and ultimately prevent future disasters taking such a toll. But this is absolutely not sustainable. We cannot control what we don’t own. As long as communities and workers have no control over the industries that are at the root of the changing climate — and the wealth and resources hoarded by the bosses — we are limited to defensive actions, rather than mitigation (avoiding as much death and destruction as possible) or complete prevention.

Both local and national governments are cutting budgets in research and social spending that are crucial to address the issue of climate change and safeguard working class and poor communities against its disastrous consequences. They clearly show where their class interests lie in their renewed commitment to the expansion of the industries that dramatically accelerate the climate crisis — the extraction of oil and gas, mining, and war.

When the extractive industries are threatened by environmental activism, the bosses threaten mass job losses and we even see the assassination of community anti-mining activists, like Bazooka Radebe in Xolobeni. The same is true for mining and large-scale agriculture. The current “commodities boom” in the platinum metal groups is used as justification to expand mining and trample over communities, yet there have been no real jobs created from this boom, and workers’ earnings have effectively decreased in the past two years — Sibanye-Stillwater gold mine workers are currently entering their fourth month on strike for wage increases. We are being sold the myth of “job creation” while the ruling class holds the future of our planet to ransom.

The capitalist system that is concerned with profit, not human life, is unable to avoid the destruction caused by these events. In fact, this system is at the root of the escalating climate disaster which is already disproportionately affecting the working class and poor. In order to combat the brutal effects of climate change, we have to fight for a system where we, the working class, have democratic control over the wealth of the planet. We need a socialist, planned economy, to ensure we can both safeguard communities from natural disasters through building food reserves, building safe, quality housing, and organized evacuation if needed, as well as prevent these entirely through urgent action against climate change. It is also only on the basis of such a system that everyone can have work, sustainable jobs that serve to fulfill the needs of humans in balance with our environment — not those of the capitalists.