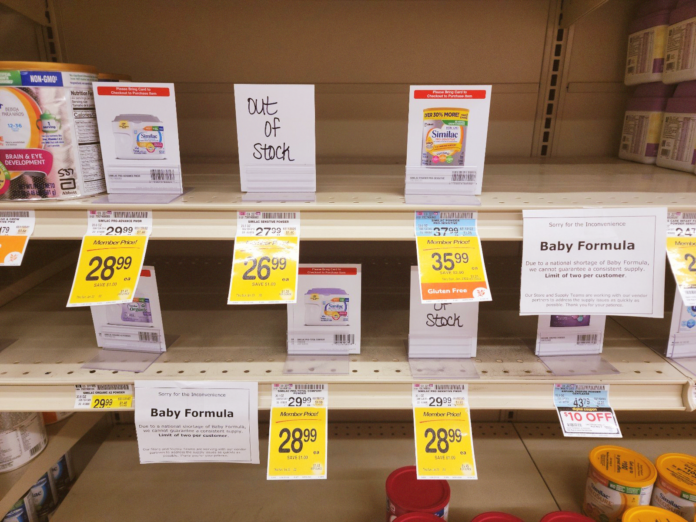 As the right wing assault on abortion rights ramps up, working parents of babies are facing an extreme crisis. General concern about supply chain disruption turned into an all-out emergency for families of infants across the country as the out-of-stock rate for baby formula in grocery stores hit 43% in the first week of May. The shortage extends to online stores, which many parents initially turned to after exhausting the stores in their hometown. In South Carolina at least four babies have already been admitted to the hospital due to malnutrition directly caused by lack of access to formula, and such instances are sure to increase over the coming weeks. The deep scale of this crisis is the result of appalling safety violations at the nation’s largest formula manufacturing plant, forcing its closure in the midst of preexisting supply-chain shortages.

The Most Basic Necessity

Modern infant formula is a scientific achievement which has had a dramatic impact on infant health worldwide, especially for poor and working class families. For most of human history, parents who were unable to produce enough milk themselves had to accept that their baby might not survive, with the exception of the very wealthy who could hire another lactating mother to nurse their child instead of or in addition to their own. Today a majority of babies between the ages of 6 months and one year in the United States rely on formula for all or part of their nutrition. There are countless reasons why formula is used, among them medical reasons, insufficient breastmilk supply or pain and difficulty breastfeeding, or needing to share the feeding burden with non-lactating partners – as well as personal choice. Crucially, when the U.S. is the only wealthy country without guaranteed paid family leave and maternity leave, being forced back to work often gives breastfeeding mothers no option but to supplement with formula or switch to it completely.

Now parents across the country are paying hefty gas prices to drive for hours not just from store to store but to other towns or states to find the type of formula their baby needs. Specialty formulas for babies with specific dietary needs have been particularly impacted by the shortage, leaving many families who rely on these formulas desperate for options. Price gouging and hoarding have been reported, exacerbating the crisis and leading parents to water down formula in an effort to make it last as well as circulate homemade formula recipes from ingredients found in the kitchen.

The anti-theft devices in many grocery stores’ baby formula aisles are a dark reminder of the inaccessibility of this basic and necessary staple even when the shelves are full. Just four corporations control over 90% of the $4 billion formula market in the U.S.: Abbott Nutrition (owners of the closed plant), Mead Johnson Nutrition, Nestle USA, and Perrigo. Roughly half of infant formula in the U.S. is purchased by WIC recipients, with heavy restrictions on what type, size, and brand they can buy. Some states have WIC contracts with a single supplier – setting up a situation where Abbott Nutrition was the exclusive provider to about half of the 1.2 million infants on WIC, and now it’s vanished from the shelves.

A Crisis Rooted in Corporate Greed

In March, Abbott Nutrition’s plant in Sturgis, Michigan – the single largest formula plant in the U.S. – was shut down by the FDA due to contamination which had killed two infants and gotten four sick with bacterial infections. The plant, which wasn’t investigated until three months after initial whistleblower complaints were filed, has already been cleared to reopen under a new federal consent decree.

However, it emerged that since 2019, Abbott Nutrition has spent over $8 billion on stock buybacks for investors rather than improving their facilities and keeping up with health codes, despite receiving billions in tax breaks from the federal government ostensibly for that purpose. The FDA’s report exposed serious cut corners like not maintaining clean surfaces, failing to provide proper protective equipment to workers, and leaving leaks in the plant unaddressed. This facility had been producing the majority of specialized infant formula consumed in the U.S., and its closure immediately created a crisis of supply for these critical products – a crisis that could have been predicted and prevented.

After weeks of resisting on the basis that the shortage would be short-lived and there wasn’t anything that could be done anyways, President Biden finally authorized the use of the Defense Production Act. Now, formula makers are warning that ingredient shortages caused by supply chain disruption could complicate efforts to increase the pace of production, a claim which Biden says his administration has yet to confirm. On top of this, heavy import tariffs put in place by Trump and continued by Biden make importing formula prohibitively expensive. White House Press Secretary Jen Psaki advised parents to go to their pediatrician if they were concerned about their ability to meet their child’s nutritional needs during the shortage – not taking into account that low-income parents on Medicaid often lack the time or ability to visit community clinics which themselves are not adequately resourced to address the urgent needs created by this shortage.

This crisis is highlighting the deep pre-existing problems in the infant formula industry and in our economy as a whole that can’t be resolved by slapping on a consent decree or temporarily increasing imports. As long as formula production, and production in general, is governed by the laws of profit maximization, shortages, corner-cutting, and price gouging are all but guaranteed.

The formula crisis is the latest in a series of intense strains working families have been forced to bear since the start of the COVID-19 pandemic. While corporate profits have soared, layoffs, loss of childcare, and school closures all contributed to a dramatic decline in maternal workforce participation and overall economic stability for middle and lower income families. Housing and food insecurity have skyrocketed, especially among families with young children. Now inflation is swallowing a bigger and bigger chunk of every paycheck. More and more young adults feel economically unable to have children – last month Business Insider referred to babies “a status symbol in today’s economy.”

The irony of pro-life forces demanding that women have babies while actively refusing to address the urgent and worsening crises facing working-class parents is illustrated by the 192 Republican legislators who voted against increasing funding for more FDA safety inspections of formula plants after the Abbott contamination scandal and resulting deaths. These elected officials are literally protecting the bottom-line of the formula industry at the expense of the safety of the most vulnerable members of society – babies.

The right is set to score a major victory in the next several weeks with the likely overturn of Roe v. Wade. The baby formula shortage is just one example of the enormous challenges that working parents face, and if Roe is overturned, abortion may become illegal for more than half of women of reproductive age. Seeing the dire crisis facing working parents, and those not yet ready to become parents, the Democrats and liberal NGOs like Planned Parenthood are sitting on their hands. While this assault is coming from the right, it’s being enabled by the Democrats and their non-profit appendages.

This crisis was created by a combination of deregulation, monopolization, and protectionist policies put in place by pro-business politicians from both parties at the behest of corporate interests. The safety and availability of baby formula is too important to be left in the hands of corporate executives who only care about the bottom line and politicians who do their bidding. Protectionist tariffs that are designed to protect manufacturer profits and nothing else must be immediately dropped and funding allocated to import formula and ingredients in amounts sufficient to address immediate shortages. By nationalizing the top four formula manufacturers we could immediately make formula free for all parents, scale up production, improve safety standards, and start planning ahead to prevent future disasters.