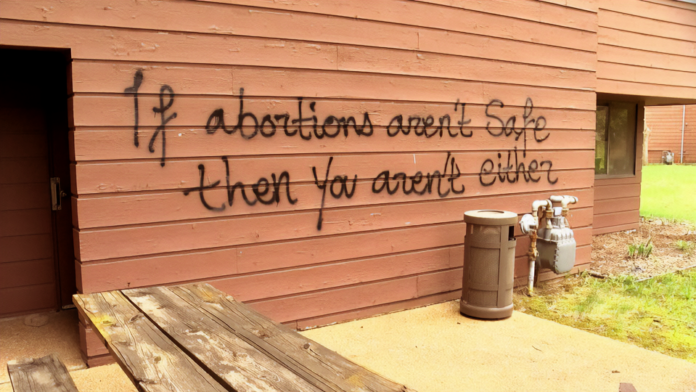 In the wake of the leak of the draft Supreme Court decision to repeal Roe v. Wade, thousands have taken to the streets in protest, including in Madison, Wisconsin. Further actions are being planned including student walk-outs and protests at the houses of Supreme Court justices. However, not all tactics are equal. On Sunday, May 8, an arson attack was carried out against the Madison offices of the anti-abortion group Wisconsin Family Action. A Molotov cocktail was thrown into their building and, when it didn’t go off, a separate fire was lit. Graffiti was sprayed on the wall reading “If abortions aren’t safe then you aren’t either.”

While understanding that this was probably motivated by enormous and justified rage at the reactionary onslaught against women’s rights, Socialist Alternative condemns this counterproductive attack. It will only strengthen the anti-abortion movement and the forces of state repression, and it impedes the efforts we – along with many others – have made to fight back against the attacks on abortion rights. Nonetheless, we won’t let it deter us from fighting back through militant mass action.

In contrast, President Joe Biden has also condemned the attack, but his response to the leaked draft decision couldn’t even condemn the Supreme Court’s attacks on reproductive rights. Meanwhile he has condemned, not only the Madison arson attack, but also protesters rightfully demonstrating outside the homes of Supreme Court justices. In that statement, Biden’s press secretary Jen Psaki said “Judges perform an incredibly important function in our society, and they must be able to do their jobs.” But for these justices, “doing their jobs” is to trample on the hard-won rights of working people of all genders.

Biden’s response to the attacks on Roe v. Wade is to declare that “it will fall on voters to elect pro-choice officials this November.” With a majority in the House and Senate, Democrats could have overturned the filibuster and fulfilled Biden’s 2020 campaign promise to codify Roe as the law of the land. Instead of a serious defense of abortion rights, Biden’s response is a cynical attempt to redirect public anger into electing more Democrats in the midterms.

What’s needed to fight back is neither nihilistic firebombings like the arson attack on the Wisconsin Family Action office nor the Democrats’ demobilizing attempts to direct people’s anger into voting blue no matter who. Unfortunately, as the right is able to launch more and more intense attacks and the Democrats continue to demobilize, we may see more desperate actions like this attack.

At the time of writing, it’s still not entirely clear who’s behind the attack. According to a report from journalist Robert Evans, the attack was carried out by a group calling themselves Jane’s Revenge. The name is a reference to the Jane Collective an underground abortion service that operated in Chicago in the years leading up to Roe v. Wade.

In their statement, Jane’s Revenge draws attention to the fact that terror attacks of this ilk are far more part of the tradition of the anti-abortion movement than the pro-choice movement. They reference a history of violent attacks on abortion clinics, doctors providing abortions, and people seeking abortions. These have been far worse and infinitely more frequent than incidents like the Madison arson attack. However, they also say “so too shall we adopt increasingly extreme tactics to maintain freedom over our own bodies.”

Elsewhere in their statement, they espouse bizarre ultraleft phraseology that can only come from being isolated from the broader class struggle, such as their claim of being “forced to adopt the minimum military requirement for a political struggle.” It’s the product of people who, out of desperation and ideological confusion, are trying to make a statement.

However, simply adopting the same tactics of anti-abortion terrorists won’t accomplish anything except to give the right and the state ammunition to crack down on our struggle. The right hasn’t come this close to reversing Roe v. Wade primarily because of far-right terror attacks, though terrorizing women and abortion providers was legitimized by a wing of the anti-abortion movement. Rather it was because of the weaponizing of the attacks on abortion by the Republican Party as a way to mobilize their base while the Democrats did nothing to codify Roe in law and demobilized the women’s movement.

The right wing’s assault on reproductive rights is far too intense to be combatted one Molotov cocktail at a time. The Wisconsin Family Action offices will be repaired and the attacks on abortion will continue. Meanwhile the right wing will be emboldened, seeing themselves as under attack. The police will strengthen their repression, which will undoubtedly be used against other activists.

The Russian Revolutionary Leon Trotsky, writing at a time and place when individualistic terror campaigns were far more common on the left, warned of the bankruptcy of this method of struggle:

“The more ‘effective’ the terrorist acts, the greater their impact, the more they reduce the interests of the masses in self-organization and self-education. But the smoke from the confusion clears away, the panic disappears, the successor of the murdered minister makes his appearance, life again settles into the old rut, the wheel of capitalist exploitation turns as before; only the police repression grows more savage and brazen. And as a result, in place of kindled hopes and artificially aroused excitement comes disillusionment and apathy.”

The current crisis of capitalism has brought with it the development of “doomerism.” Right-wing attacks, the pandemic, the economic crisis, all paint a picture of a society collapsing. The failure of Black Lives Matter to bring about meaningful police reform, the rightward drift of Bernie and the Squad, the worsening climate catastrophe, and growing white nationalist terrorism has reinforced a feeling of hopelessness for many. This creates the ground for individuals and small groups to turn to nihilistic, adventuristic, and counterproductive attacks like these.

But the doom and gloom is only one side of the picture. The immediate response to the leaking of the draft Supreme Court decision has also seen a revitalization in mass struggle, with people taking to the streets once again. This occurs side by side with gains in the labor movement as Starbucks and Amazon start to unionize. These are the sort of struggles that point the way forward. Unlike isolated arson attacks, mass demonstrations, walk-outs, strikes and the building of mass organizations of struggle independent of corporate control have the power to change society.